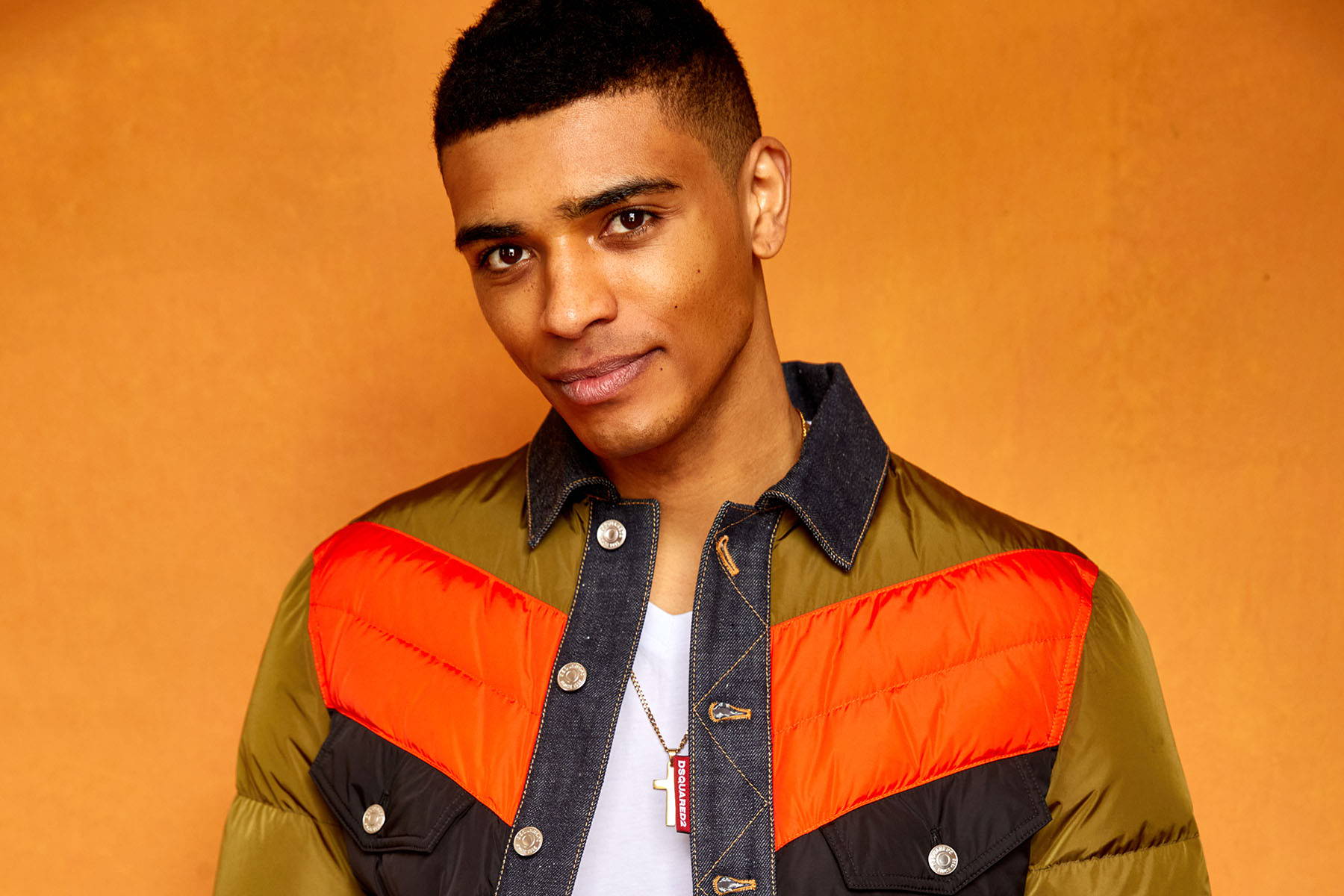 You might recognise rising star Jeremias Amoore from a number of roles - Agyman in “Die Modemacher”, or perhaps Pete Whitaker in Amazon Prime’s “The Start Up”. But it’s his role as talented ice hockey player Bear Stelzer in the Netflix original series “Zero Chill” that’s really caught the world’s attention. Amoore spent months learning to skate in order to play ice hockey at a professional standard for the role, and it was time well-spent: the series held a top ten slot on the Netflix charts for weeks, garnering him a whole new fanbase.

Words by Octavia Akoulitchev
Photographer: Bartek Szmigulski
Styled by Kieran Fenney
Bear may be an all-star “nice guy” athlete on the surface, but as the series goes on he reveals hidden layers that many young men feel pressured to conceal - from painful emotions to a deep-rooted fear of abandonment. This is something close to Amoore’s heart: he led a mental health campaign in partnership with Young Minds, “Does This Look Familiar”, and speaking with Rollcoaster he says, “as men we often feel embarrassed to show vulnerability for fear of appearing unmanly. Creating safe environments and communities globally where one feels encouraged to talk about their feelings and to grow in the community is key. It needs to be normal to listen, accept and respect one another’s feelings - no matter what gender or background you have. So that when one is feeling vulnerable you don’t have to worry about a social stigma being attached to you”.
The German-Ghanaian actor sat down with Rollacoaster to discuss playing Bear Stelzer in “Zero Chill”, why we need to change the conversation around men’s mental health, and the upcoming roles he’s most excited for.

Hi Jeremias! Congratulations on “Zero Chill”, it’s been such a huge success! What was it like filming the series - can you talk us through the highs and lows?
We had a lot of fun making this series! My highlight was working on this fun script daily with great people and embarking on the journey with my character. A low would be when we found out mid-scene that we had to stop production due to COVID, but I guess that was a low for everyone. When production was able to continue again in the midst of lockdown it was a huge relief, and so the adventure resumed!
You were filming in Sheffield, and during lockdown, both of which are quite unusual for a Netflix series. What was that like?
I fell in love with Sheffield, it’s such a stunning town with its beautiful city centre, and such open and lovely people. When everything was still normal we would meet on weekends for cast dinners and socialising with friends, and go to art conventions and markets together. But once COVID rules were in place we were mostly isolating in our free time away from set. That was much tougher but it made me appreciate the time on set with everyone so much more.
What’s your fondest memory from filming?
One of my favourite moments was when we were all gathering in the cold in the beautiful English countryside shooting the laser tag match. Everyone was so full of excitement and it felt like an expedition into an unknown world, full of discovery. It was magical!
You’ve played football competitively almost all your life, I was wondering how those two parts of yourself - actor Jeremias, and athlete Jeremias - intersected when you were preparing for this role. Did you bring in skills that you’d learned from your own sporting experience?
Incorporating the mindset I learned from competitive sports into my acting life helps me put my head down and work until the goal at hand is achieved, and it particularly helped when I was learning how to play hockey on a tight schedule for “Zero Chill”. I basically went from slipping and sliding around the ice to playing full-on hockey games within six weeks - my knees were glad I hit the gym before training started though!
Now, whenever the lake freezes over around Christmas I might pick up my skates for a cheeky little hockey session in the midst of Germany’s quietly snowy countryside - so I guess my acting projects do complement my sports and vice versa!
Are you similar to your character, Bear Stelzer?
Bear and I have similarities yet are also very different. I’d say what we have in common is the fact that we both care a lot about our siblings and family. The biggest difference would probably be that he is a pro hockey academy captain and I first got acquainted with the sport when getting cast for “Zero Chill” two months prior to shooting.
When I was preparing for the role I watched my first hockey game, held my first hockey stick, fired my first slap shot and scored my first hockey goal in a real match, which was a huge victory for me! So you could say that our ultimate differences also helped broaden my horizons a lot.
Bear is a nice guy but doesn’t have a simple, perfect life by any means, and he is multi-layered. Can you talk us through your process of developing his character and accessing those deeper parts of him as the show went on?
Bear is full of love and life, and a fighter at heart, which is a result of the many obstacles he’s had to overcome in his life. It was a joy to really delve into the process of investigating his background and circumstances, especially as we dived deeper into his back story. There were new details to be discovered everyday. It’s this process of open-minded and curious discovery that I find brings colour and depth to a part, but also thrills me as an actor and enriches my own life as a person.
You don’t just act in films and shows, you also led a mental health campaign in partnership with Young Minds, “Does This Look Familiar”, and when playing Bear Stelzer you access things like fear of abandonment, and deep-rooted emotion that boys often feel pressure to conceal. Is being open, and speaking about mental health, something that’s important to you?
Yes, I think it‘s incredibly important, speaking openly and expressing our feelings and deep-rooted fears can really help free us from the grip of anxieties that plague us as humans, especially in this time - so I think encouraging an open and accepting dialogue is key.

Do you think boys and men need to be encouraged to speak about emotions more, and be given a safe space to do that? What do you think needs to change?
As men we often feel embarrassed to show vulnerability for fear of appearing unmanly. Creating safe environments and communities globally where one feels encouraged to talk about their feelings and to grow in the community is key. It needs to be normal to listen, accept and respect one another’s feelings - no matter what gender or background you have. So that when one is feeling vulnerable you don’t have to worry about a social stigma being attached to you, just for speaking about your emotions.
Do you have any other projects in the works which also deal with this topic?
I’m starring in an art film called “The Death Of Daniel Fernandez” which deals exactly with this question of vulnerability in men and working through mental health issues. I hope that it will serve to encourage men who struggle to embrace their emotions.
Everyone involved was so passionate about the project and it really felt like everyone understood the weight of the story we were telling. Being part of a film with such a key message and beautiful imagery meant a lot to me and I hope to be part of more projects that take on such an important subject in the future.
What’s next for you?
I’m currently embarking on a lovely feature film, which I am very excited about, with a great team attached! I am also getting ready to shoot a beautifully written sci-fi project and I’ll also be heading to the USA!
What would your dream role be?
In terms of dream roles there are a lot of pictures and stories that have literally changed my life: “Malcolm X”, “Black Panther”, “Ali”, “On The Waterfront”, “The Last Tree”, “Waves”, “Get Out”, “The Godfather”, “Beasts Of The Southern Wild”, and “In The Fade” - just to name a few! Their powerful beauty, poetry and masterful observation of the human condition is what fascinates me the most. Great stories broaden the way I perceive the world, help me to embrace myself and others, and just give me joy and goosebumps.
I want to serve as a vessel for projects that can do the same for other people. 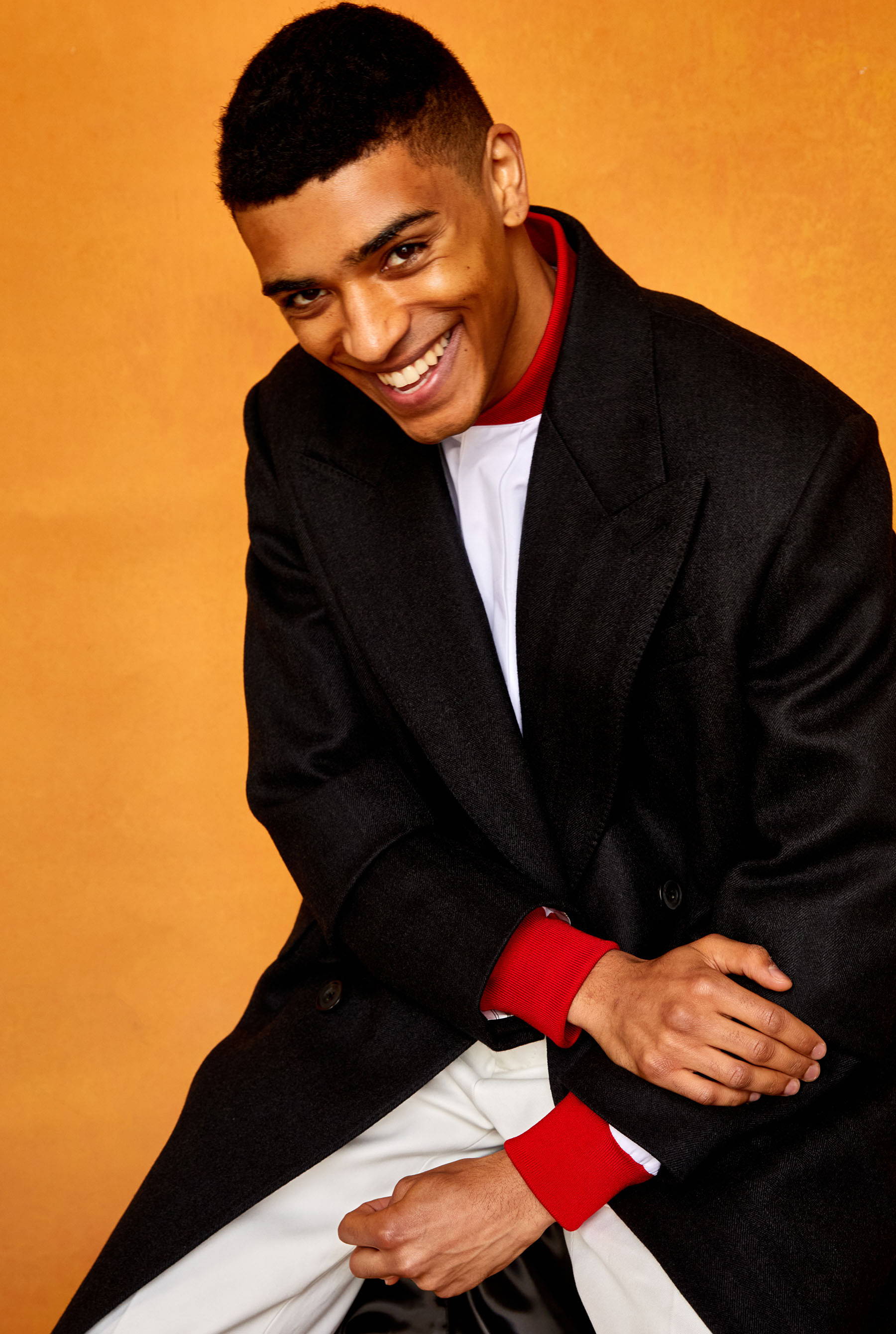 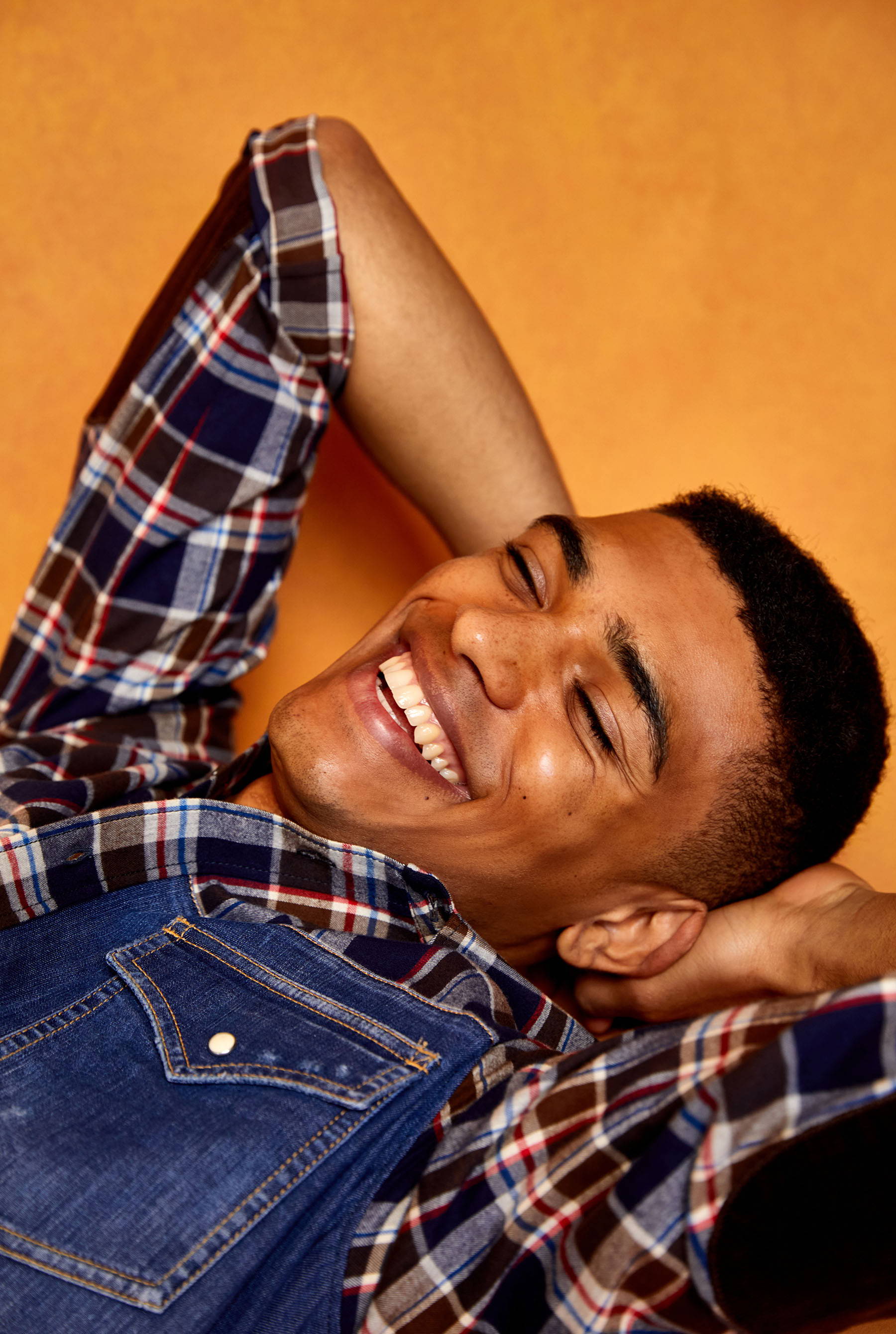 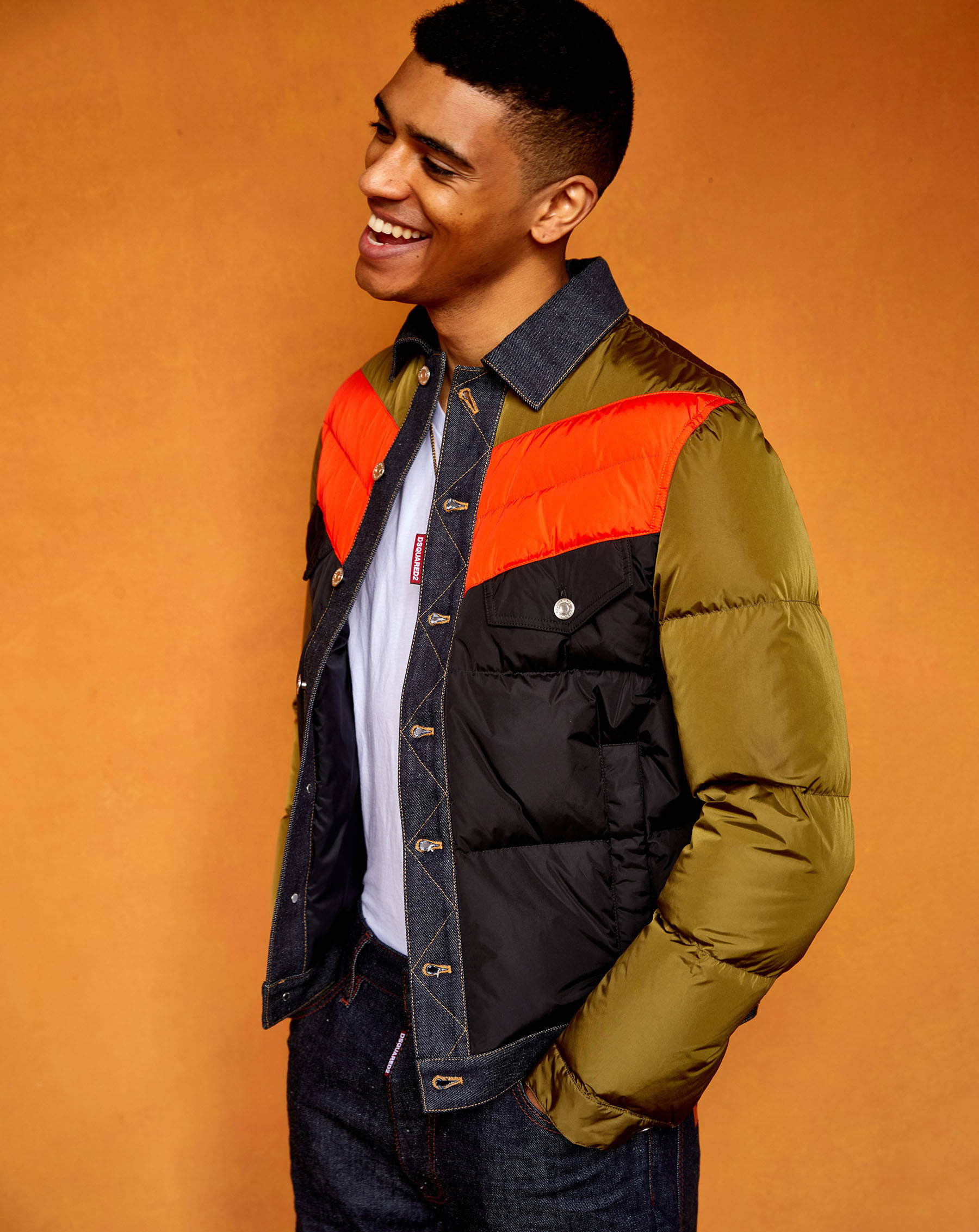