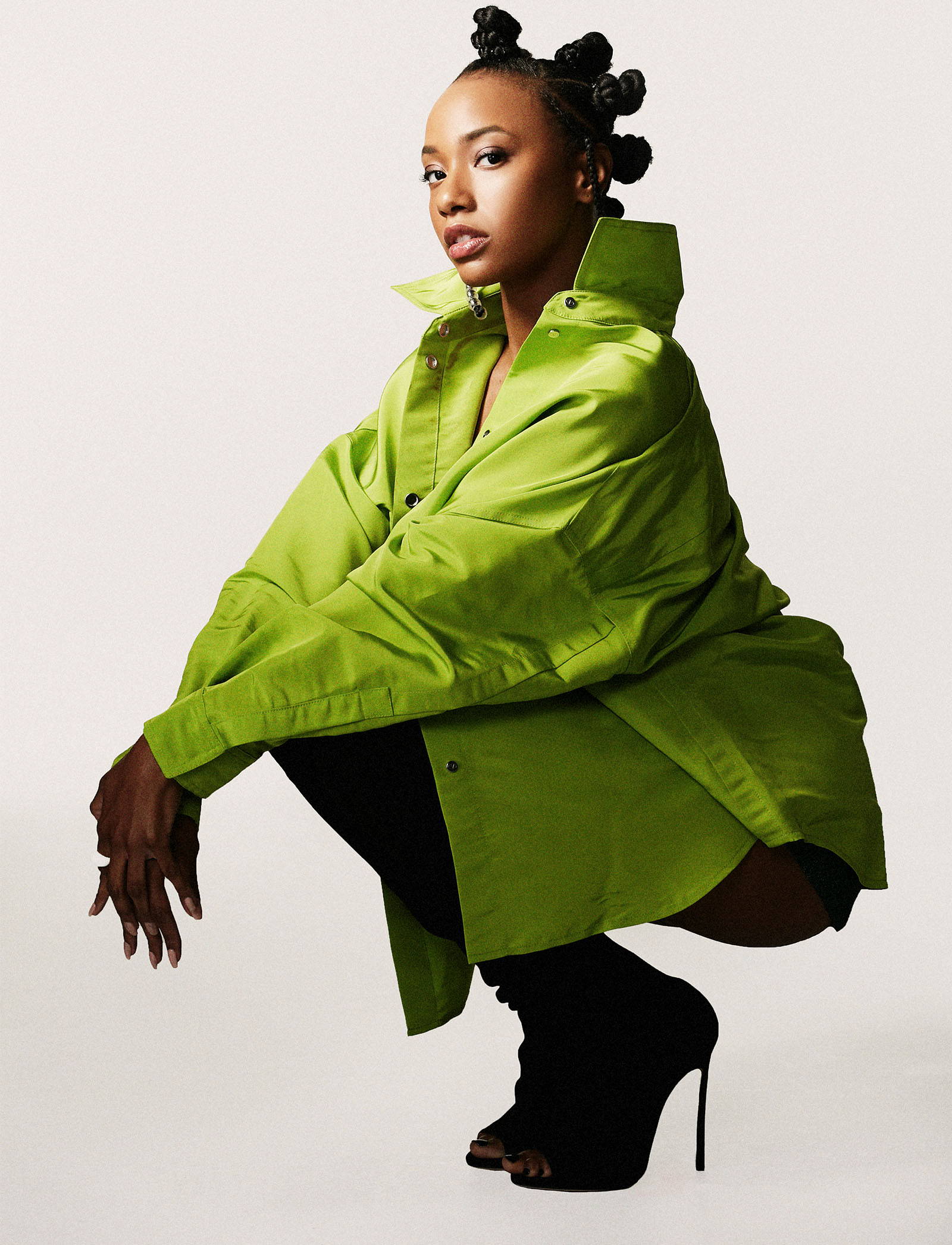 Alyah Chanelle Scott was starring on Broadway, playing a major role in The Book of Mormon, when the pandemic hit. Theatre was, as she puts it, “annihilated” and she had to adapt. She did exactly that, moving into TV and landing a leading role in the HBO series The Sex Lives of College Girls written by Mindy Kaling. She plays Whitney, one of the four main leads, and as the show is set to release today, Alyah sat down with Rollacoaster to chat about the role, working with Kaling, and her goal to uplift people from marginalised communities.

Hi Alyah! We’re reaching the end of the year, how’s the past year been for you?
Oh my goodness, so many highs and so many lows. The pandemic was crazy in so many ways, I was doing a theatre production before we shut down and I was on tour. When the pandemic hit, theatre basically was annihilated, there was no gathering allowed in public spaces so I lost that job, which was really tough. I got to go home and spend some time with my family, but that got old for a second. So then I went to LA and I got the audition for The Sex Lives of College Girls, and got this job. I just changed with the changes, then I found my way and there ended up being so many blessings in disguise. But yeah, it's been a whirlwind of a year, lots of new experiences, lots of change, lots of learning, and I'm just grateful for it all.
What was it aboutThe Sex Lives of College Girlsthat initially appealed to you?
When I read the title of the show, I was like, “hmmm...not something that I would be into”, just because I wasn't sure what angle they were going to go with it. The title is very provocative and I was like “If we're going to use sex in that sort of way, I don't think it's something I'm interested in”. Then I read the script and just fell in love with the character. I think these girls are just so human and the experience was so familiar to me, being a young woman who went to college away from home. When I read Whitney's lines, I was like, “this is exactly the way I would say these things”, I can find her voice very easily. I just fell in love with the idea of the show’s world. I didn't know what it would look or feel like but I was just like, “I think it would be fun to be in that world. I think it'd be fun to find her.” I just fell in love with the characters and their relationships and when I read the pilot, I was like, “Yes, this is something I would love to do.”
How are you similar to Whitney and how are you different?
I think we're similar in a lot of ways. She is someone who may at times present as very confident, but internally is dealing with a lot of turmoil, and I can be like that as well. And I also relate to her experience of leaving home and going away to college for the first time. It's like there's so much freedom to a point where it's exciting, but it's also terrifying. You get to make all of your own decisions, which means you get to make all of your own mistakes, and I certainly did that. And also the experience of being a young black woman at an institution where there's not many young black women. I also had that experience and so reading the script I was just sitting in those feelings and feeling them. They're very fresh, I graduated college in 2019, so everything just felt right.
What was filming like? Can you take us through the highs and lows?
Yeah, it was a crash course in TV acting for me because I come from the theatre world. I’d never ever been on a set, I've never ever done anything in front of the camera. I had no clue. Even something as small as the lingo people use on set - I was just a fish out of water. But something that was really great was that the four of us were all sort of new. And we really helped each other and made each other feel very comfortable on set. So having other people who also felt a little bit new to it really helped. Especially Renée, she’s one of my closest friends now, and we just really bonded over the fact that we didn't know what was happening most of the time. We used that to get closer and to find our own way into it. The experience of acting on screen is not anything you can really learn unless you're in the space doing it. So we all just were in it together - it gave us a really good energy while we were filming and it ended up being a really fun experience.
Did you hang out with each other off-set as well?
So here's the deal, it was during COVID. I remember that first day, we all were not in LA when we started. So they flew us in and they put all of us in the same hotel. And we were so scared of COVID at the time, no one was vaccinated, it was very frightening. I am a person who has anxiety, so I struggle with meeting people and I tend to be pretty reserved and quiet. I was like “How am I going to meet people, one when it's COVID, and two when it’s hard for me anyway?” There's this card game called We’re Not Really Strangers, the cards have questions on them. My boyfriend has them and he was like “You should bring these and play the game with the girls and get to know them”. So I was texting in the group chat like “Hey, do you want to maybe sit outside and play this card game?” We sat around this fire pit six feet away from each other. I was like, “tell me when you feel closest to your mom”. We laughed and we cried, and it was a really good way for us to meet each other, especially during COVID. We weren't allowed to go out to eat together, so it was tricky in that way. But we found our way.

What was it like working with Mindy Kaling?
Oh man, she's a queen, a comedy queen, the queen. She is just a boss-ass woman. She's so smart, and she's so good at what she does. She's earned her place in the industry. It's really inspiring to see someone in that position who is a woman of colour, and is at the point where she doesn’t need to ask for permission. She's so strong. She knows so specifically and so clearly what she wants, and she asks for it. I've rarely had access or the opportunity to see women of colour work in such a position of power. I was always so nervous around her because she's Mindy Kaling, but I was in awe of her and her capacity to work. I mean, she's got kids, she had a kid right before we started filming. She's a mom, she's working, she's acting in things, she's writing things, she’s just a queen.
Was there anything that you took away from working with her, or a piece of good advice she gave you?
I just admired how she was herself at all times, it always felt like she was comfortable in the space. I rarely see women of colour be able to navigate spaces so strongly, confidently and graciously. I just really admired the way she worked and I learned a lot just watching her work with people.
What’s next for you?
Hopefully I can continue to work with artists from marginalised communities, that's something I'm really passionate about. It's this whole idea of, “once you get in the door, can you open it for more people?” And so I'm trying to figure out how I can start to get more footing and start to find my place in the industry so that I can start to usher in people whose work I admire. I feel like I'm so lucky and privileged to have been given this opportunity. I just want to make the most of it and uplift people in my community. But hopefully more acting, hopefully something in the world of writing. I’m just really figuring out what I love and trying to follow that at all times.
Can you give us a hint about what you've been writing?
It's so new, it's just a little hobby. I've always written poetry but now I'm starting to write scripts and it's really just for myself and to chase that little creative drive in the back of my mind. Write things that I want to see, write things that I want to play or things I want to see my friends do. Stuff like that. Nothing super serious. It's just fun.
Photographer: Heather Gildroy
Hair: Michael David Warren
Makeup: Autumn Moultrie
Styling: Kevin Michael Ericson 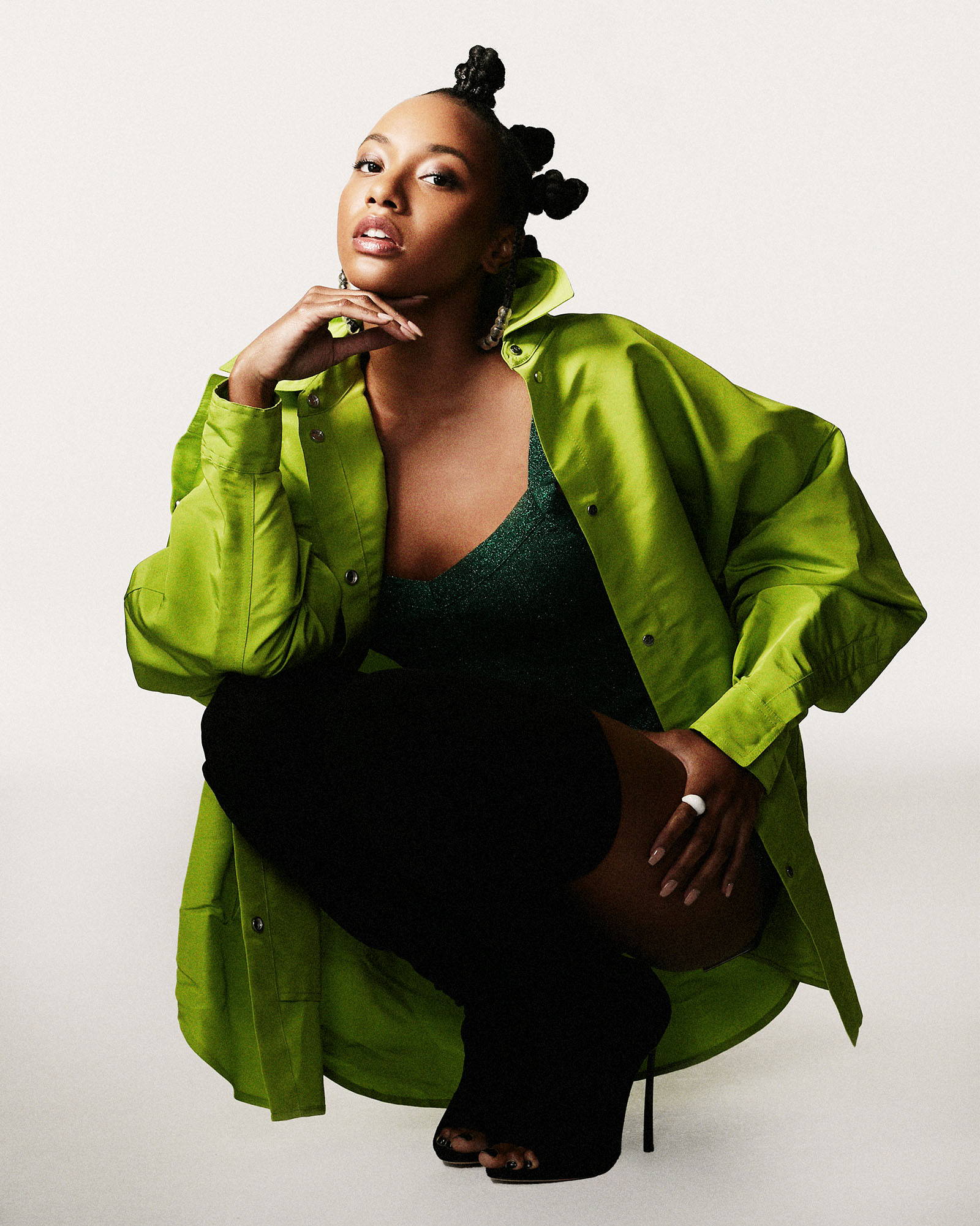