ASHNIKKO teams up with Beats & TikTok 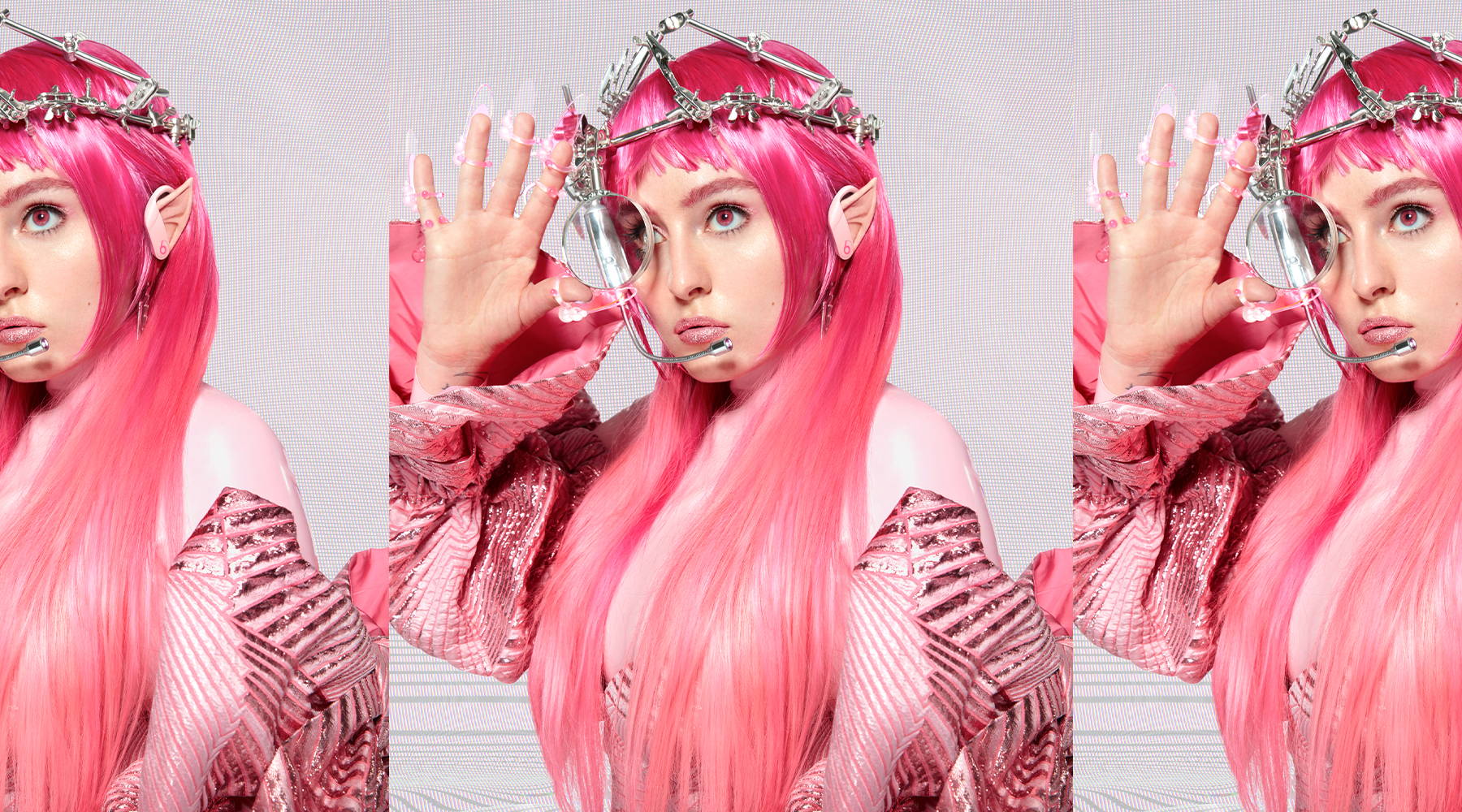 Ashnikko is a humanoid robot drenched in salmon ruffles, crowned with a torturous hardware monocle. Then a rave-dominatrix bumblebee in a striped bodysuit and threatening spikes. Better the devil you know in a searing red latex bull suit, perched gingerly on a mountain of chilis. And then a futuristic blue extraterrestrial in a mesh unitard with metallic harnessing – ice cube stacks balancing on every limb. Mystical and depraved all at once, it is the hyper-coloured universe dreamt up by the genre-bending American provocateur for the teaser of her new music video for “Daisy”.

But there’s a catch: it’s not quite finished yet. Ashnikko has teamed up with Beats by Dr. Dre and TikTok to launch bombastic new campaign #BeatsDaisyChallenge, which will call upon the TikTok community to create a series of clips to be then used in the visuals for the raucous and empowering new track.

Helmed by director Charlotte Rutherford, the video incorporates the four vibrant new Beats PowerbeatsPro headphone colours: Glacier Blue, Spring Yellow, Cloud Pink and Lava Red. During a four-week period, the singer-rapper will leverage her community of TikTok mega-fans to participate in creative challenges – each week a new challenge will be released representing a new colour. Ashnikko and Beats will then choose the most creative submissions to be featured in the final version of the colourful music video, which will feature the headphones, Ashnikko’s wild colour narrative, and incorporate TikTok videos submitted during the campaign. A cabin fever dream awaits. 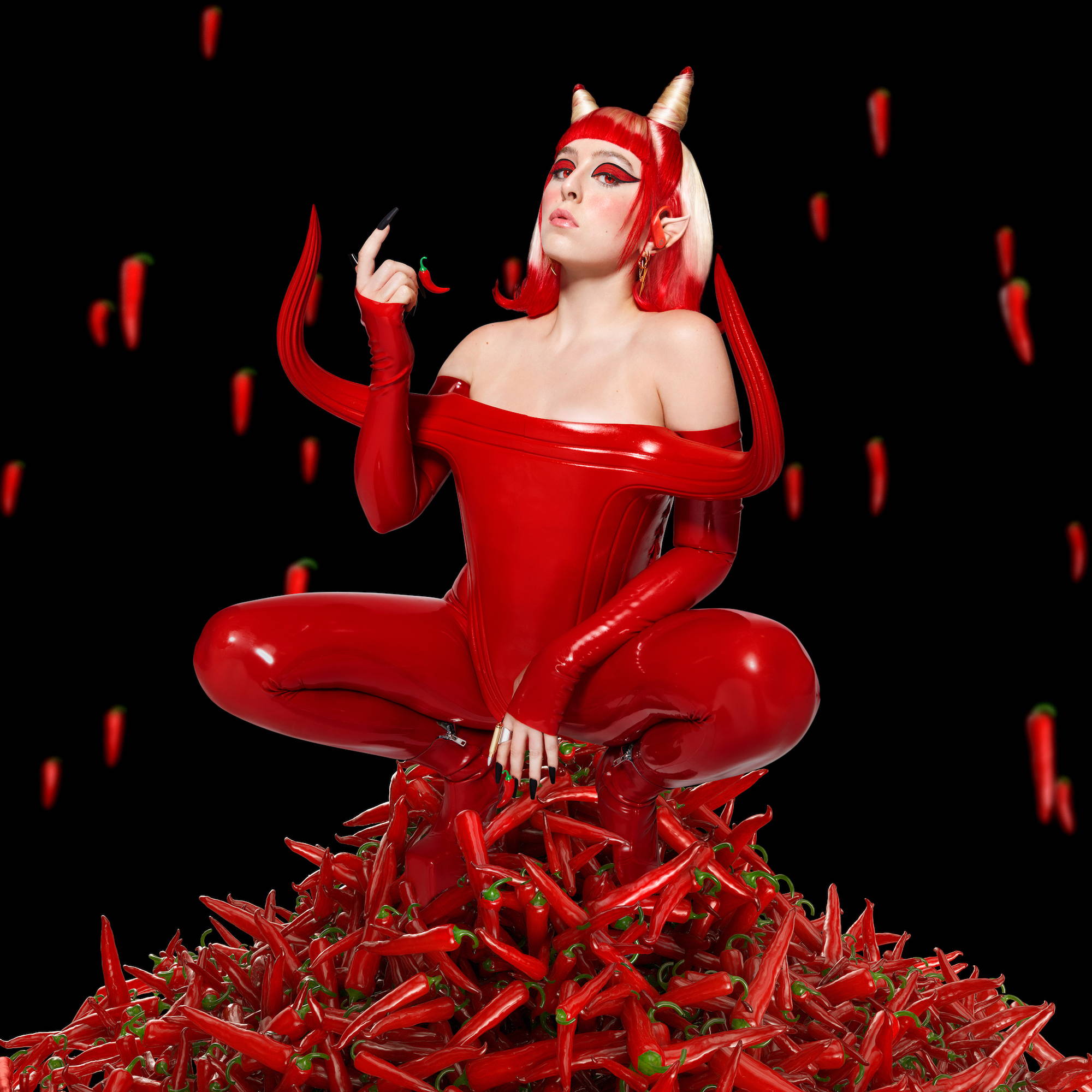 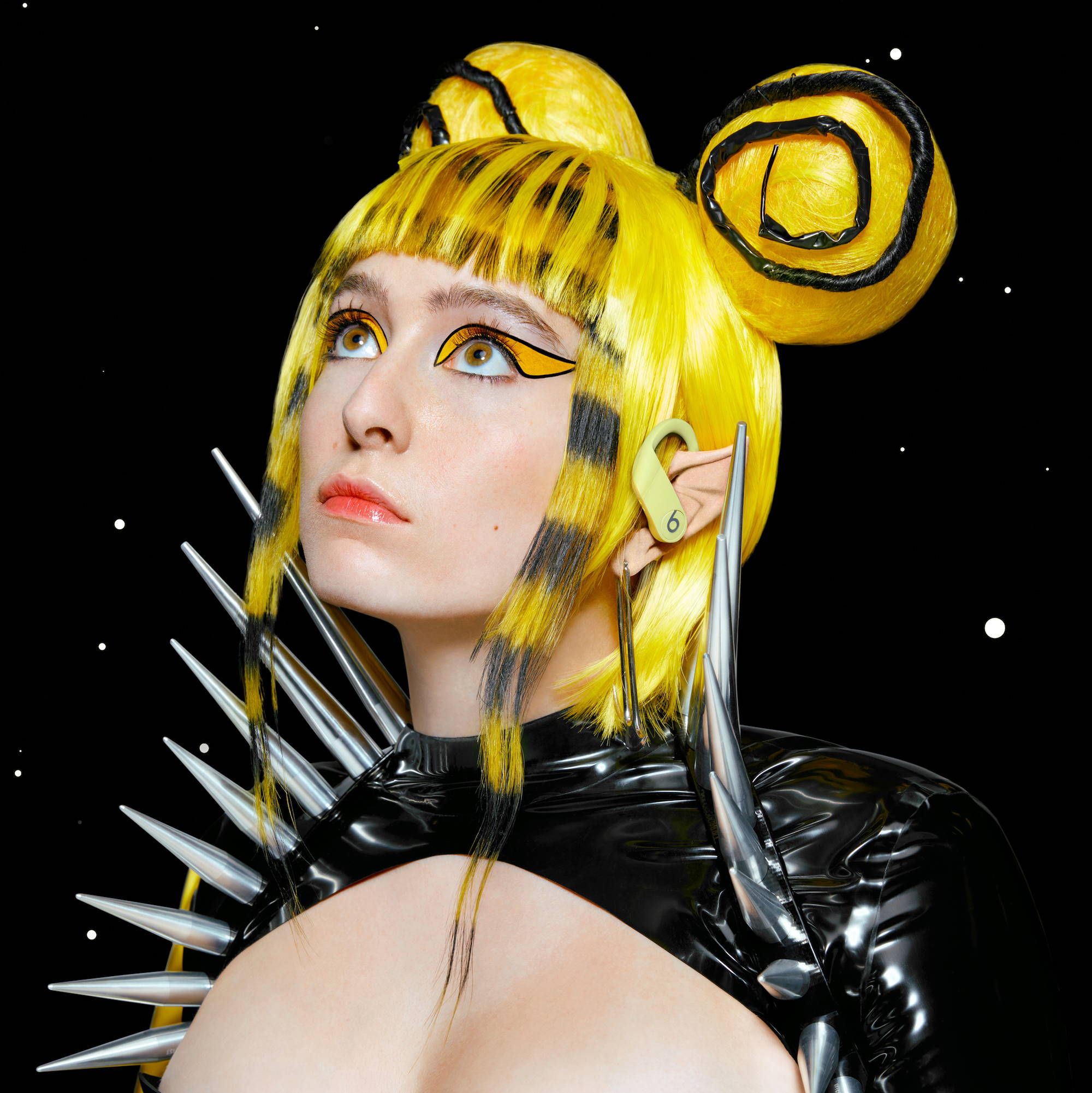 Hi Ashnikko, how have you been?
I’ve kind of lost my voice, I sound like an old man. I was doing a metal live session version of my song “Cry” yesterday in a crypt near King’s Cross.

Obsessed. Congratulations on your new song “Daisy” – can you just talk me through the inspiration behind it? What was the songwriting process like?
I mean the song is just a bad bitch song. It’s like pure confidence boost – that’s what I was trying to get across. Usually when I write all my songs I have this character that I have in mind, so this one is like this Daisy character, she’s like a vigilante and she kills rapists and she leaves behind daisies as a calling card. So in the chorus, it’s like “daisies on your night stand,” so if you wake up and see daisies then something quite sweet becomes quite terrifying. Then the rest of it isn’t super deep, it’s just like “fuck a princess and king, bow down and kiss on my ring”. Very dominatrix boss bitch lyrics, that was the vibe I was going for.

And how did you come up with the idea of doing a fully TikTok-crafted music video? You’ve had amazing success on Tiktok before…
It’s in collaboration with Beats and TikTok – a little threesome there. I feel like people don’t give TikTok enough credit for how influential it is in music right now, and I think it’s really important. For me, including my fans in the whole process and campaign is really important because ultimately there would be no campaign without them. They’re all so fucking smart, intelligent and funny, I’m always cracking up at all the memes and stuff that people make.

So the music video is this colourful fever dream, split into the colourways of the new Beats Powerbeats Pro headphones – how did you and videographer Charlotte Rutherford go about concepting it and creating it?
Charlotte came to me with all of these wild ass ideas. I don’t know how she came up with them! So there’s four colourways: the blue scene is me bent in really odd positions, balancing precariously on a stack of ice cubes with my neck extending out of my body and swirling around in the air, which is cool. She was like “what if your neck extended from your body and did a 360”, and I’m like yeah, for sure, let’s do that. Then red is me riding a giant chilli, and then I’m in my own mouth on my own tongue. So the whole thing is like a wig dream, just like four amazing wigs. The pink one is this amazing hair with this very tech-y headpiece, like an eye monocle and I’m on a screen, tied to it, riding around in latex. And in the yellow one, I’m in a flower, in a daisy, and I am a sexy bee, and at one point I’m in a stripper heel. Charlotte’s so good, she’s a real visionary.

Your work has always been proudly feminist and sex positive – have you always been this way?
Oh no, I think a lot of my early stuff is absolute fucking garbage. I was a teenager and I was just stupid. Somebody the other day was like have you ever made a bad song? I was like, listen to me kid, you just haven’t heard the bad stuff. This is the thing, you have to make so much shit art to make good art, so I think it’s really unfair when people’s demos get leaked and people are like, oh that’s really shit. When I was a teenager, I was a bit of a “pick-me” girl, had a lot of internalised misogyny just from being raised in the conservative South, and I think when I discovered feminism on Tumblr or something, and my whole life just fucking changed. I was like, wait you mean I don’t have to live my life trying to please men and make myself smaller and downplay my own achievements? What the fuck, great.

And your hit track “Stupid” which went viral on TikTok, and you even had Miley Cyrus doing the challenge – has that been one of your biggest pinch-me moments so far?
It went gold yesterday in America!

Congratulations!
That’s my first solo gold record, I was so happy. “Boss Bitch” that I co-wrote with Doja Cat went gold which is fucking sick, but “Stupid” is like my baby. I am just so so happy. That song’s been fucking nuts. It just made me realise you need to trust your gut because nobody else from my label and management were super hot on that song. I knew it was going to bang and it did! So anyways, basically for me it just reaffirms that I can do whatever the fuck I want.

And be celebrated for it!
Exactly. I feel like a lot of women in the music industry have imposter syndrome and I feel like I had that for a long time where I was always looking for someone to tell me that I was doing the right thing. I was working with a lot of dudes, and then one day it just clicked, I was like I am a professional, I’ve put in the ten thousand hours – it takes like ten thousand hours or something to become a pro. I’ve put that in, why am I looking to other people to give me approval or tell me what I’m doing is right?

I love that, and I feel like that definitely comes across in the spirit of your music. If a fan or someone was to listen to your music for the first time, what’s the one thing that you hope they take away from it?
I think it’s confidence, because that’s what I look for in music. You should look at my playlist when I was a teenager, I don’t think listened to one sad song, but it was almost like a manic need for confidence, I was so insecure.

Fake it until you make it.
Exactly. My last EP was a big was a big fake it ’til you make it because I was destroyed by my breakup, like really really upset and just really struggling with my mental health. And somebody told me to write myself a letter. So I started writing loads of love letters to myself, everyday when I was feeling really bad, and then I was like, I need to start doing this with my songs.

What is your favourite Beats Powerbeats Pro colourway?
Beats just gave me every single blue colourway they have, so I have a lot of blue headphones that go with everything. I love blue and the pink one is really cute because it just looks nice with my hair. I’m trying to do my own customised colour, my exact shade.

So obviously 2020 has had a rocky start – what are you excited about for the remainder of the year?
I feel like touring a project or touring your music is kind of what everyone has been doing forever and now we just can’t do that right now, so I feel like I’m excited to do so again. I feel like it’s a good opportunity to be extremely creative with how we reach our fan bases and how we promote music. I think there’s something very DIY about it that kind of reminds me of being a kid again. I make loads of YouTube content with my friends and loads of livestream shows. I’m planning to do a bunch of queer strip club live streams, like 18+ livestream parties, and some kid-friendly ones as too. 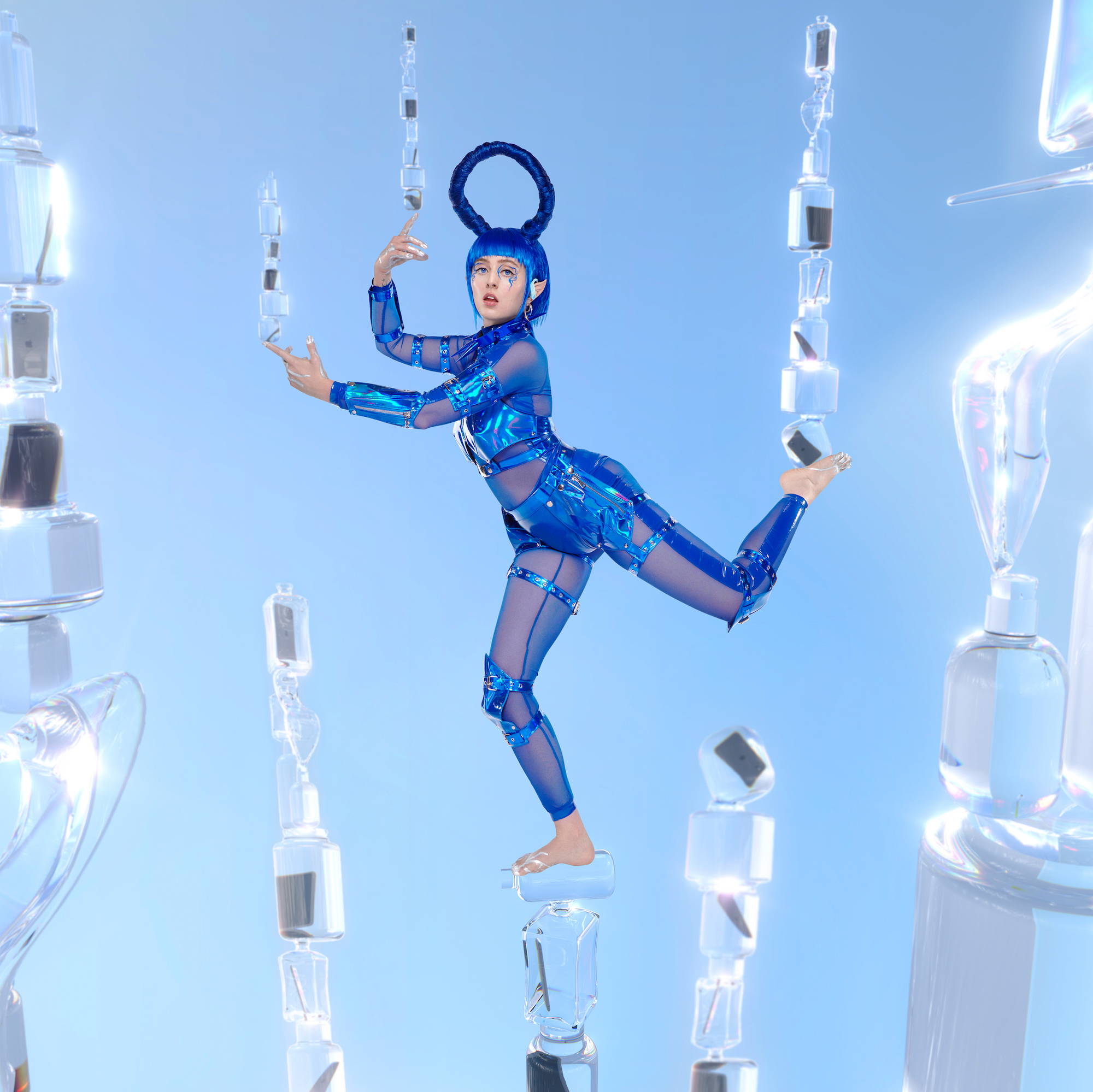