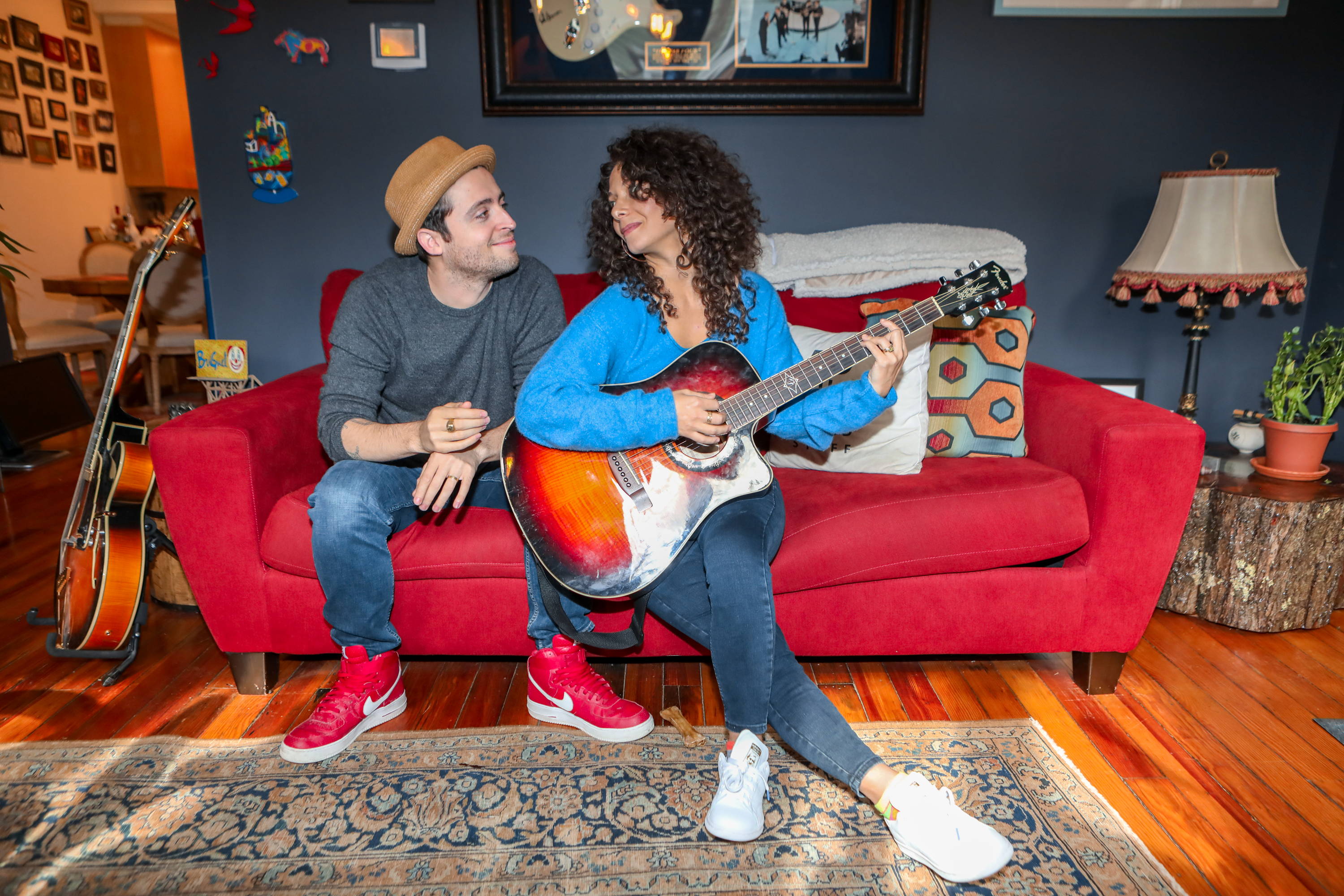 It’s not often that an IRL couple can harmoniously craft art together. But proving there is always an exception to the rule, is New York city-hailed duo Briguel – comprised of Brianne Berkson and Miguel Gluckstern.

The pair have made a name for themselves with their brand of upbeat bilingual pop – packed with energy and innovative melodies. They also produce and direct visuals, from comedy short films to corporate mini-docs.

Now BriGuel have now returned with their EP, “2020 Vision”, as they examine how the world has changed, and what they envisage and hope for the future.

We caught up with the pair and talked lockdown creativity, how they met, and what they hope 2020 will bring…

Hi BriGuel, how has lockdown been treating you? How have you been staying creative?

BriGuel: Lockdown. Somehow lockdown has felt like both a much needed shake up and simultaneously a deep breath, a global pause. Of course there've been inconveniences and challenges (like not being able to commune with family and friends, projects and work that was disrupted, and even the fact that family couldn't hold our now 6-month-old daughter), but somehow lockdown has been enlightening and expansive. Although, let us also say, we are very lucky: last Summer we left Brooklyn for the Woods (we live 11 miles north of Manhattan literally neighbouring 500 acres of state park). AND we are always together and work from home ordinarily. SO our World wasn't as disrupted as many others. Also, due to lockdown, we couldn't work in-person with our Producer Matt Chiaravalle, so we had to step up our game: we're now hands-on Producing our music and then we share it with Matt for the final magic touches. Currently, we're working on a new Album, we're nearly done with a music video for our song "Different View" off our EP, we're developing a series based on our Film "The Difference," and we're busy with a few client-projects.

Brianne and Miguel how did you first come together and decide you wanted to make music together?

Brianne: When we first met, it was instant chemistry from the get-go. Miguel hired me to produce a short film he was Directing and the synergy between us, both professionally and personally, was undeniable. Miguel was also working on an Album at the time.

Miguel: When I heard Brianne's voice, I immediately knew I wanted to make music with her, and I asked her to be part of the album. We haven't stopped since.

Brianne: That's how BriGuel was born. We haven't left each other's side creatively, professionally or personally. It’s beyond awesome.

What genre would you describe your music as?

Brianne: For us, its a fusion of different genres. Every song depends on the current mood, the melodies that come through, the moment... Basically each song is inspired by a different time, place, space.

Miguel: We make the music we want to hear and we love a variety of styles and genres.

Miguel: And of course hip-hop and rap. At the end of the day, Brianne sings and I rap, so that's always the foundation, but these other genres certainly are part of the music, too.

Congratulations on your EP - how does it feel to be releasing music at such an uncertain time, or is it the more important to be doing it?

BriGuel: Thank you. Initially, we pushed the release of the EP because we wanted to make sure we were sensitive to everything that's happening in our World - it felt odd promoting ourselves during such times of collective change. At the same time, we always feel our music uplifts, invokes, inspires, and serves as a way to alchemise difficulties. Also even though we make the music, we feel like the music is its own entity. It comes through us, but its not about us, if that makes sense? So during these times, now more than ever, we feel its important to share the music; to convey the music's hope, love and positivity, recognising that we are one human race. We feel its the least we can do: use our voices to unite and spread love.

Miguel: 2020 Vision was initially inspired by "The Difference," the song and documentary that we produced with Andres Gonzalez and the Holistic Life Foundation, of which he's a co-Founder. In "The Difference," we examine: how do we make sure our children live and thrive rather than struggle to survive? What can we do to make a difference? In our case, we use music and film to accomplish this task, so we decided to continue creating impactful music with Andres and 2020 Vision was born.

What is your favourite lyric from the new EP and why?

Brianne: Wow. That's a tough question. We love so many lyrics. Can we say all of them? Haha. If I really had to narrow it down, I'd say either the chorus of "The Difference" - sweet things/ listening/we are THE DIFFERENCE / take care give love / we have the power / its in our hands its up to us; OR the outro of "No One Really Knows" are you stuck in time / burning up inside / cursing life / what's it all for? what's it all for? / you are here in time / why not heal inside, live your life / whats it all for? what's it all for? For me, these lyrics sum up the main intention of the EP: right here, right now, coming from a place of love, you have the power to create a life you love and make a difference for yourself and others.

Miguel: I don't have a favourite lyric, they are all special in different ways, all pieces of advice that I tell myself depending on the context. I love "Dark Oblivion" because we are trying to explain with words something almost unexplainable as its the concept of death and traveling between dimensions, but also "Keep Going" or "No one really knows" because of the hope they impart.

How important is it for you to maintain the bilingual aspect of your lyricism?

Miguel: We speak 2 languages and feel they are both as important, Spanish is my mother tongue but English is the language I speak the most and it allows for a broader audience to be reached. We believe in the power of words and want to make sure people from everywhere can connect with the message.

What do you hope people take from your music?

What are you excited for next?/What have you got coming up in 2020?

BriGuel: So much to come in 2020! Creatively, a new album which we aim to release this Fall, a few music videos to accompany the album (we already have 2 songs with music videos completed off the new album), new collaborations and features and of course more music with Andres. We'll also release "The Difference" documentary and will continue developing the "The Difference Series," which is a documentary series fusing music, art and social change, examining how various artists use their platforms to make a difference in our World. We're also beginning production on a new film and of course we'll produce projects for clients that, thankfully, align with our mission to uplift and inspire through music and film. We're excited for it all and especially grateful that the ideas, creations and projects keep flowing. We're also excited for what seems to be a New World, for all. As we share in a "Different View," "could it be a New World has begun?" We truly hope that these unique 2020 times have welcomed lasting, profound change recognising we are all in this game called life together so the easier we play, the more love we share, the better it'll be.