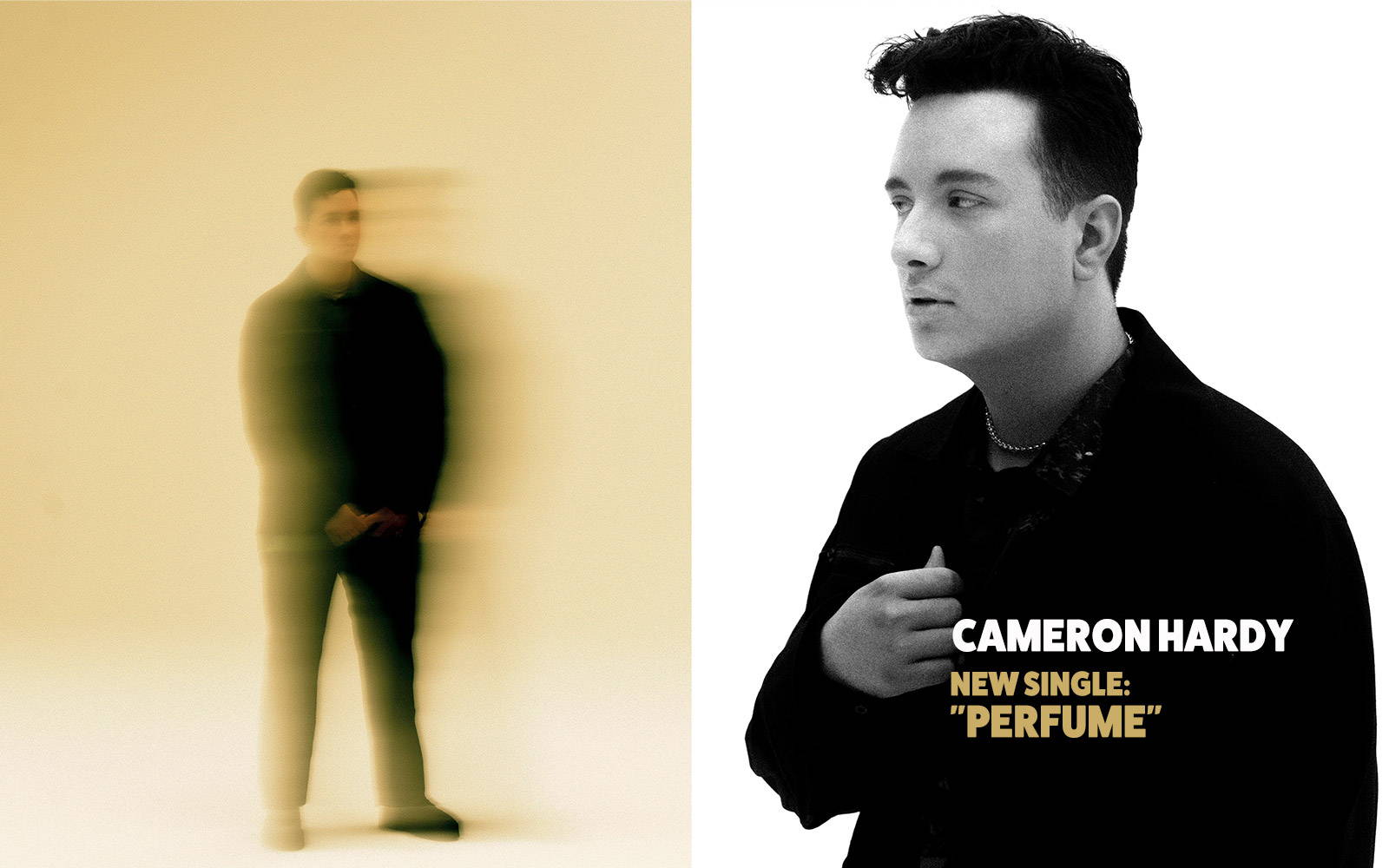 Cameron Hardy on the inspiration behind his new single, “Perfume”, finding the courage to be vulnerable in his songs, and why music is like therapy for him.

Pop newcomer Cameron Hardy made waves in the industry with his debut single “I Thought You Were Lonely” in early May. Merging rhythmic pop melodies with an R&B and electronic-infused sound, the track, with its catchy lyrics and polished music video, surpassed one million streams worldwide. Not wasting any time, he's just released his follow-up single, "Perfume".
Already Hardy’s artistic evolution is marked - the lyrics are noticeably more complex, emotionally charged, and sensually evocative, than those of his first release. Speaking about “Perfume”, he says, “I think it's important to live your truth and not have a facade. It's important to be your most authentic self, and I think I did that with this song.”
Hardy sat down with Rollacoaster to discuss the track, how the lyrics tied in with his personal life, and using songwriting as therapy.

Cameron Hardy on the inspiration behind his new single, “Perfume”

Hey Cameron! How has this year been for you so far?
It's been such a long journey of wanting to be able to put out music and finding the songs to do so, and it's been going really well so far. I'm super happy with how people are receiving my first single and I'm excited that "Perfume" is coming out now.
What was it like releasing your first single, “I Thought You Were Lonely”, during COVID?
It was interesting. A lot of the creative was being pushed back due to COVID precautions, so there were so many obstacles to getting a lot of people on set to shoot a video. That was tough, but at the end of the day I think we did it the best that we could and I'm really happy with how everything turned out.
How did you first get into music?
I just loved music so much growing up and knew that it was something that I wanted to do. I started out doing musical theatre, that was one of the main reasons that I decided to pursue music because I just fell in love with performing, and then I started writing. Once I started writing it just opened up a whole new world for me.
Who are your biggest musical influences?
I love artists that are versatile and can do pop/R&B - Justin Timberlake and Charlie Puth are my favourites.
You can really hear that pop/R&B influence in “Perfume”. Tell us about the track.
“Perfume” feels very authentic to me. I love how deep and emotional it is, and I feel like it's definitely going to pull on people's hearts more. I do think it's cohesive with my first release, “I Thought You Were Lonely”, though. That's my goal, to make my music as cohesive as possible but at the same time to be able to experiment with a different vibe and give people something new to listen to.
The lyrics are really evocative, talk us through your songwriting process.
We actually started with the concept of perfume. Usually when I'm writing we'll start with a vibe and build a song around that, but in this case, we really wanted to write a song called “Perfume” because we just thought that was so dope and very sexy and cool. So, we started with that and it kind of tied into my personal life at the time, and that's how it came to be.

How did it tie into your personal life?
At the time I was in a new relationship, and the song’s about being in a new relationship and missing your ex. I feel like that's something pretty vulnerable to talk about but I think we did it in the best way possible. When I'm writing I always try to make it about my personal life, that's something that's super important to me because I feel like it's most genuine.
Do you use music as a way to sort through your feelings?
Yeah, 100%. Music is my therapy and writing music specifically can just bring closure to a situation, which this song did for me. It's 100% my form of therapy.
What do you want people to take away from the song?
That it's okay to be vulnerable and it's okay to put your feelings out there. Regardless of whether you think people are going to resonate with it or not I think it's important to live your truth and not have a facade. It's important to be your most authentic self, and I think I did that with this song.
Do you think you find it easier to be vulnerable when you're speaking through music?
Totally. I think it just lightens the situation, which can be super helpful in getting your emotions out there.
What’s next for you?
Hopefully, a couple more singles out before the end of the year! In 2022 I definitely will be on the road touring, which I'm super excited about. Bringing a show to life is going to be awesome, we've already started rehearsing for live shows. I can't wait to have the world open up again and be able to meet all the fans and just play a show for everyone. I also definitely want to release an album, hopefully next year!

“Perfume” is out today. Stream the single HERE and watch the music video above.