Breaking out from the confines of his conservative surroundings, the New York artist explains how he’s using music to craft a unique new world. 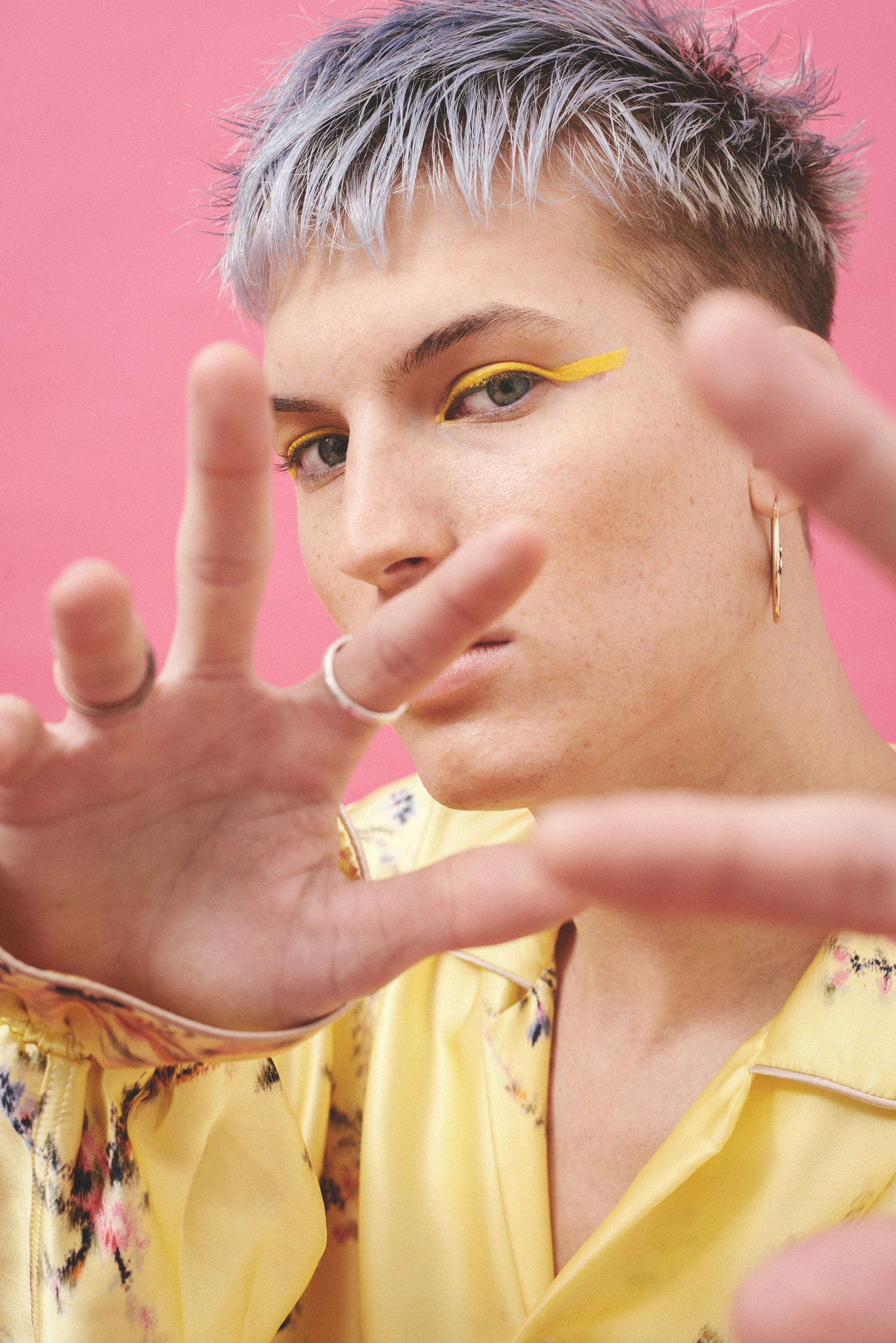 Top by PREEN by THORNTON BREGAZZI and all own jewellery 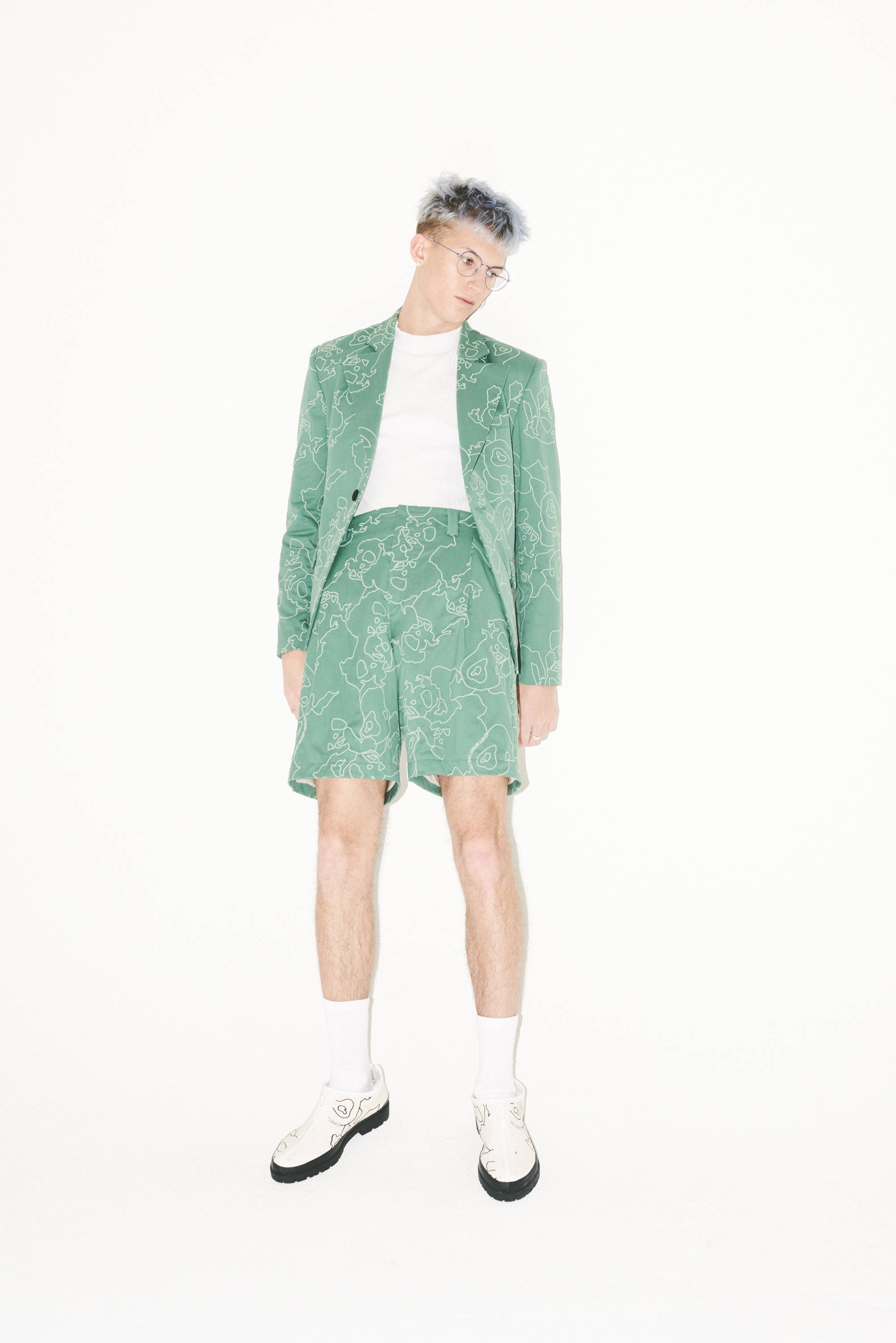 Blazer, shorts and shoes by WAN HUNG, and top by CALVIN LUO

Brendan Rice makes music that could fit right into a Hollywood montage, perfect for a sun-soaked road trip or whirlwind romance, cut in slow motion and graded in dewy pastel hues. The Brooklyn-based singer, songwriter and producer - who performs under the name Gus Dapperton - merges percussion with 80s new wave synths to create a nostalgic indie pop sound full of off-kilter beats. His lyrics flow like inner monologues, building multi-layered narratives around song titles like “I’m Just Snacking” and “My Favourite Fish”, with an immersive visual universe to match.

“I definitely make music that sounds like a world I would easily exist in, a world I would thrive in,” the 21-year-old tells me over the phone. “Meaning a place that’s very open-minded and encouraging of anything, because I grew up in a town that was very discouraging, especially to the arts. Music was the place where I could be in my own world and create my own world.”

For two decades, home was Warwick, a town in Orange County, New York. It’s only an hour and a half from NYC, but Gus tells me it feels more like the mid-West. “It’s super rural, it’s a farm town,” he emphasises. “Everything revolves around high school sports and stuff.” Stifled and dissatisfied with the conservative, insular environment, he accumulated a number of creative outlets as a teenager, from drawing and painting to filmmaking, sampling vinyls and mixing hip-hop beats on Apple’s GarageBand. It wasn’t until a particularly low point, when a surgical procedure isolated him inside for a long stretch of time, that he decided to create his own artistic identity.

“It wasn’t necessarily like a devastating period, but for me it was probably the most devastating period in my life,” he explains carefully. “My Mac crashed - and that was my entire life - and I was going through stuff with my ex-girlfriend. At that point it was just the flip of a switch. It was like this is what I need to do. I need to make original music, I need to sing on my own tracks regardless of how my voice sounds. It was a really influential time.” 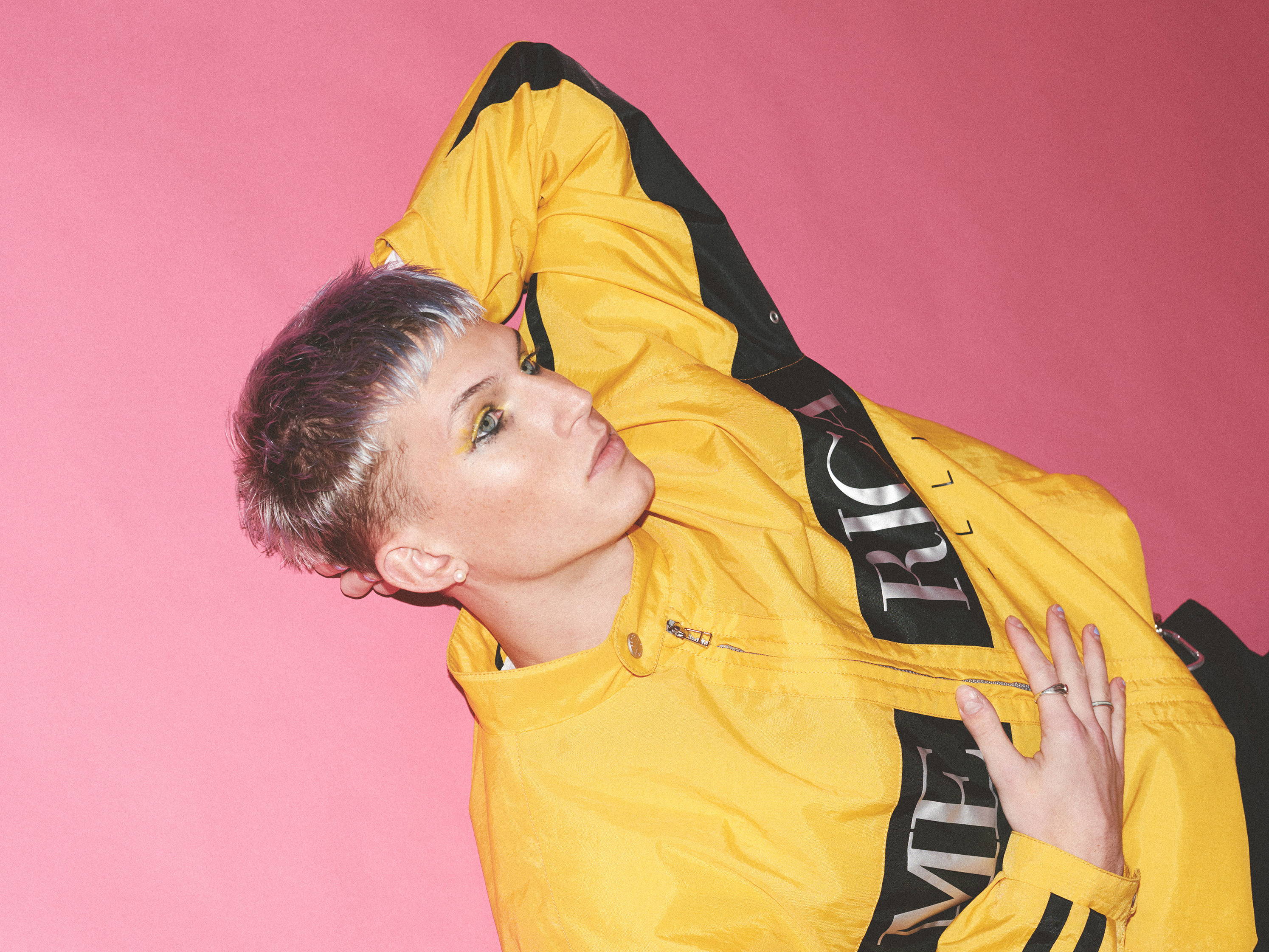 Jacket by PERRY ELLIS, all own jewellery

And so, Gus Dapperton was born. But the moniker has never represented a branded alter-ego or stage personality, he insists. Rather, as Gus Dapperton, he’s committed to living and creating as authentically as possible. “As soon as I started, it was very reminiscent of what my music sounds like today. It was really just a natural creation,” he tells me. “I kind of understood the consequences of being myself might be inconvenient and it might be challenging but I just stopped giving a fuck. I’ve never known someone who’s outspoken about being themselves and being authentic to be miserable on the inside.”

He started spending more time skating and clubbing in the city, catching lifts at three in the morning with his friend’s detective father and couch-surfing in the summer holidays. New York gradually evolved from a fascinating but inaccessible neighbour into a consistent source of inspiration, friendship and opportunity. In New York, his music could flourish too and over the past few years he’s cultivated his distinctive sound with two polished EPs - 2017’s “Yellow and Such” and last year’s “You Think You’re a Comic!”

When we speak, he’s just finished up his debut album Where Polly People Go to Read, a 10-track lyrical tour of the highs and lows of falling in love. “The first four tracks are the fall and falling out of an unhealthy relationship,” he explains. “Then the next four are falling in true love very deeply, and the last two are the reality of being in true love, which is great for what it is, but ultimately it’s a harsh reality.”

I get the sense that love and longing fuel Gus’ need for creative expression - be it for human relationships, art and film, or nostalgia for the childhood that now informs his eccentric style. “I usually say love is one of the greatest emotions and then heartbreak is an even greater emotion because it’s just love, but love and tragedy,” he affirms. “Almost all of my music is influenced by that in some way. It creates the strongest feelings inside of me.”

With a European tour planned for Spring, Gus is currently looking forward to going on the road with his band which he stresses proudly is made up of his sister and their long-time skater mates from back home. After that the plan is more music. “At least definitely until new technology comes out where there’s a greater art form,” he ponders.

Before we hang up, I ask him if he feels brave forging his own path in an over-saturated industry, how he stays committed to his uninhibited, authentic self-expression, and what advice he’d give to those looking to do the same. “I’m always just an advocate of being you,” he replies simply. “Being yourself comes with great inconveniences and consequences, but ultimately it gives you an opportunity for the most gratifying moments in your life. Just be yourself, you know?” 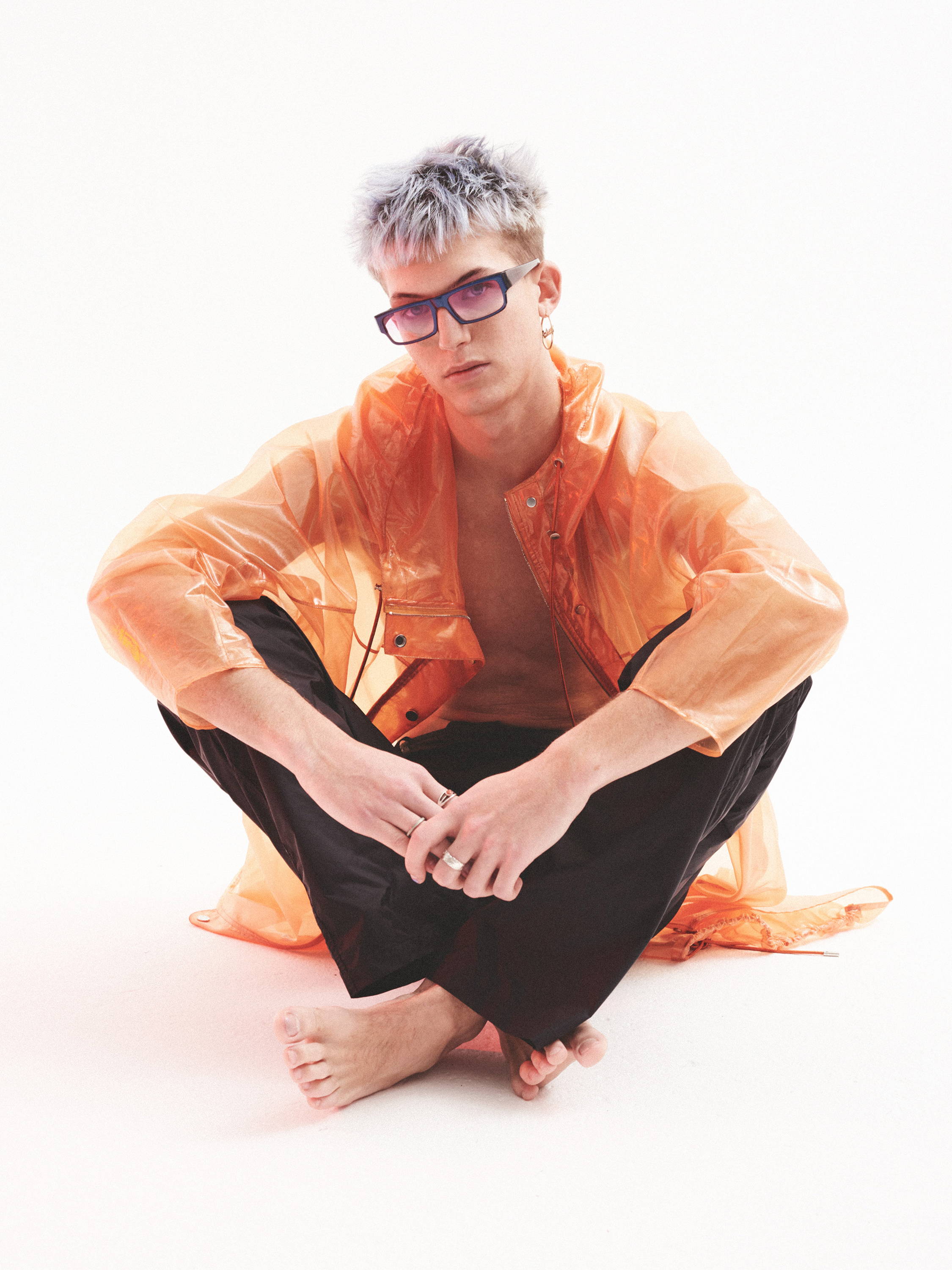 Coat by ALEXA CHAPMAN, trousers by PREEN by THORNTON BREGAZZI 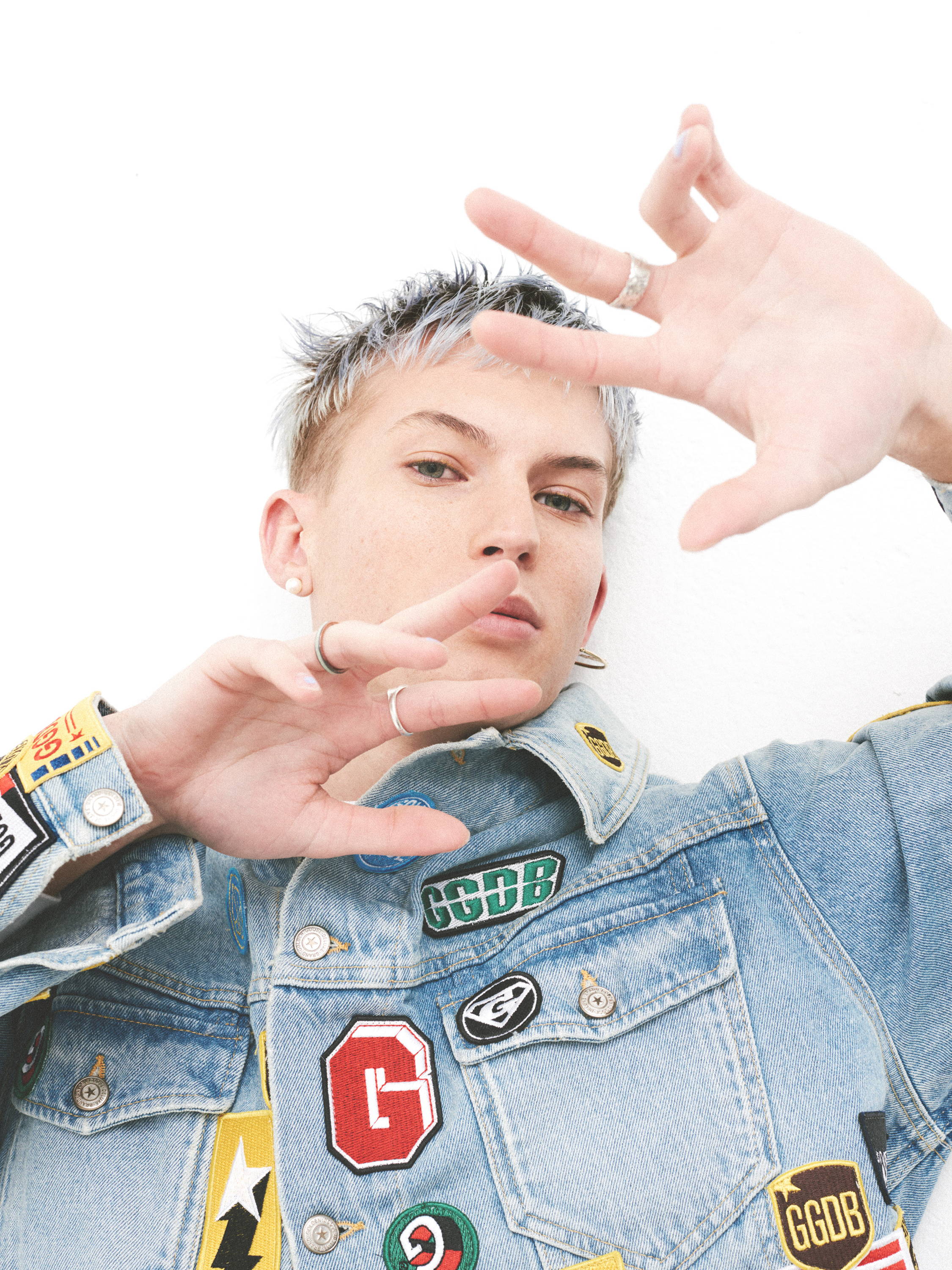 Jacket by GOLDEN GOOSE and all own jewellery

Hair by NERO at MR. SMITH