South Londoner Joy Crookes is documenting her life, her city and the people she loves through music. After a whirlwind summer, the singer-songwriter sits down with Erin Cobby to chat about her influences, finding independence and why she might be your next Uber driver. 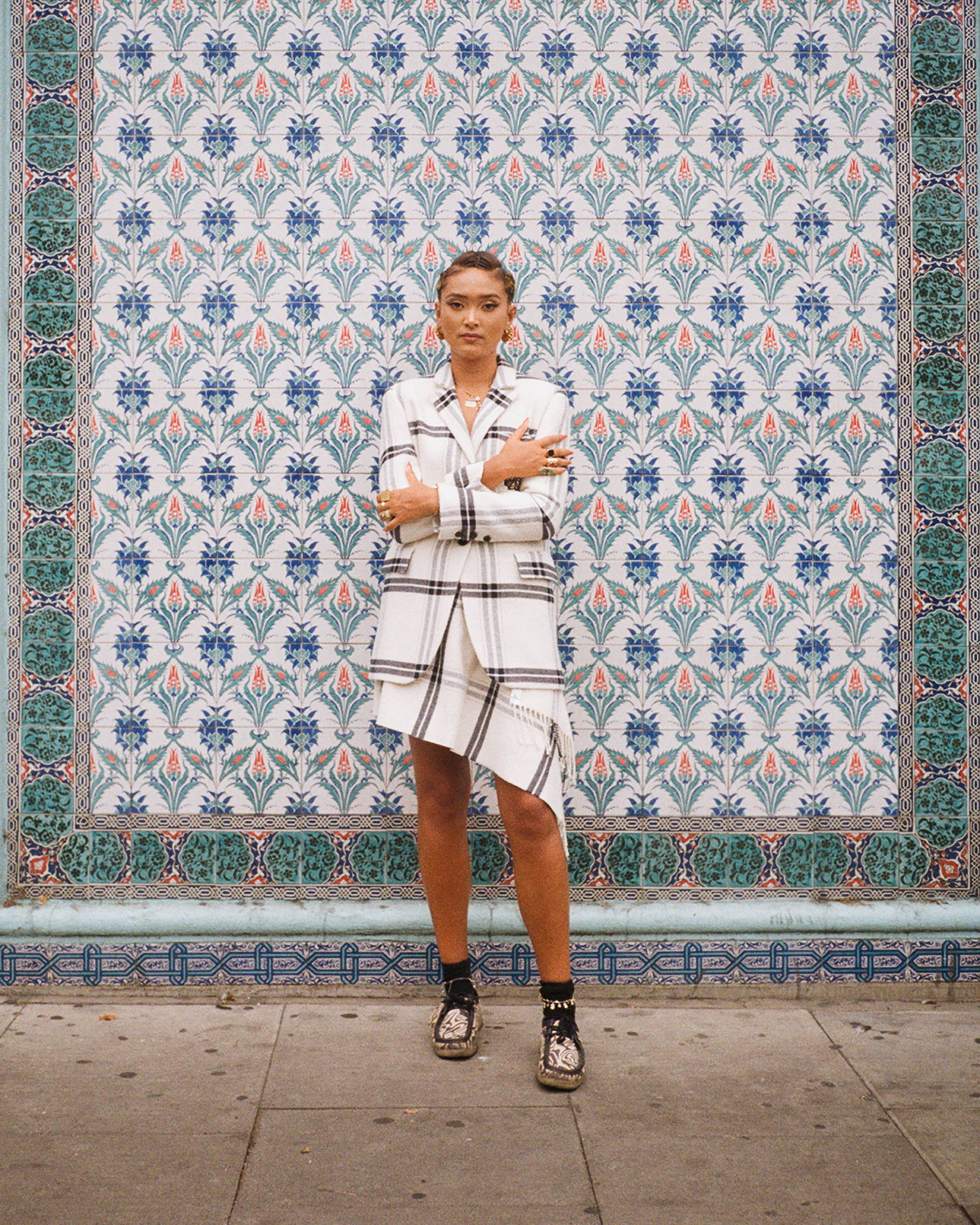 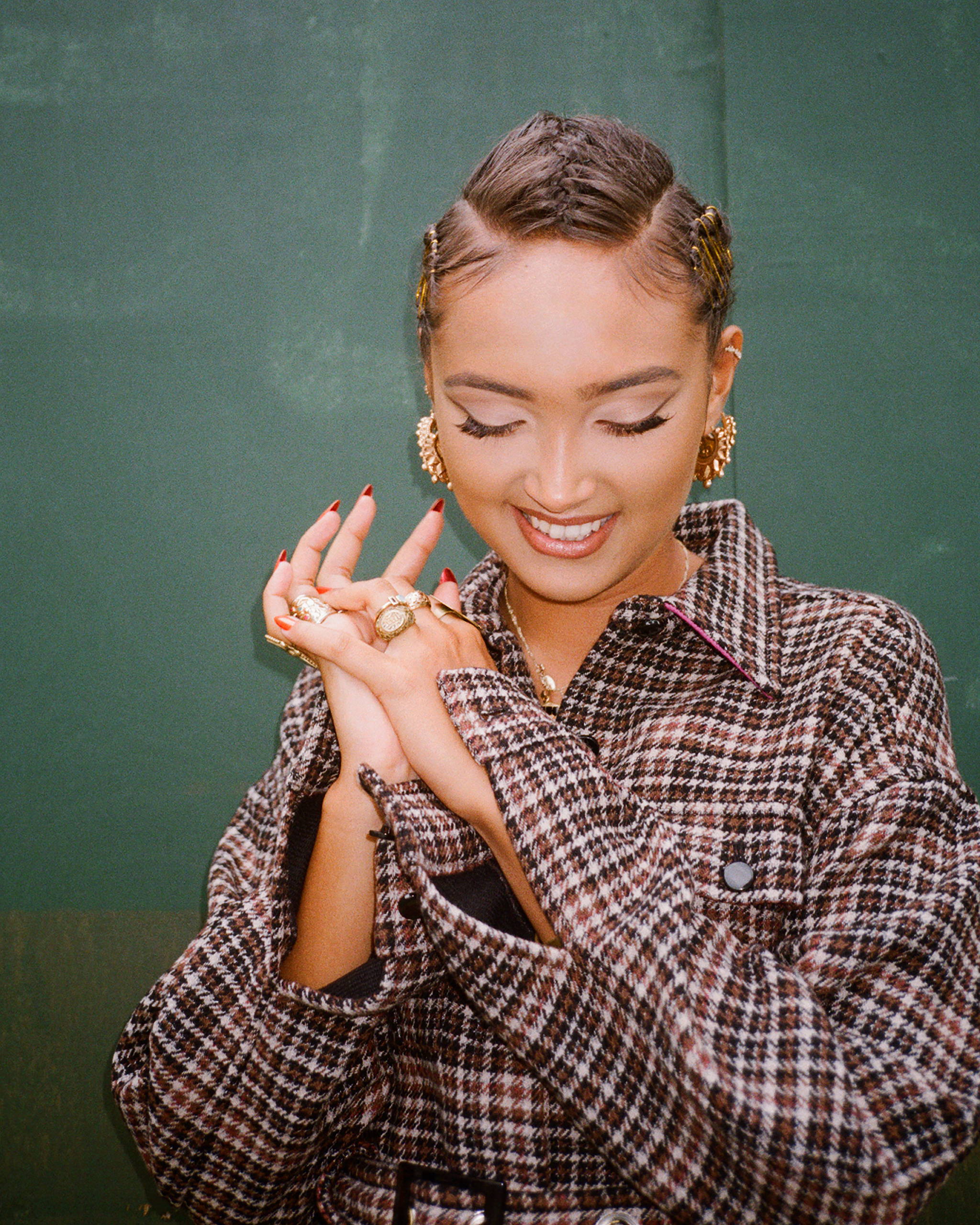 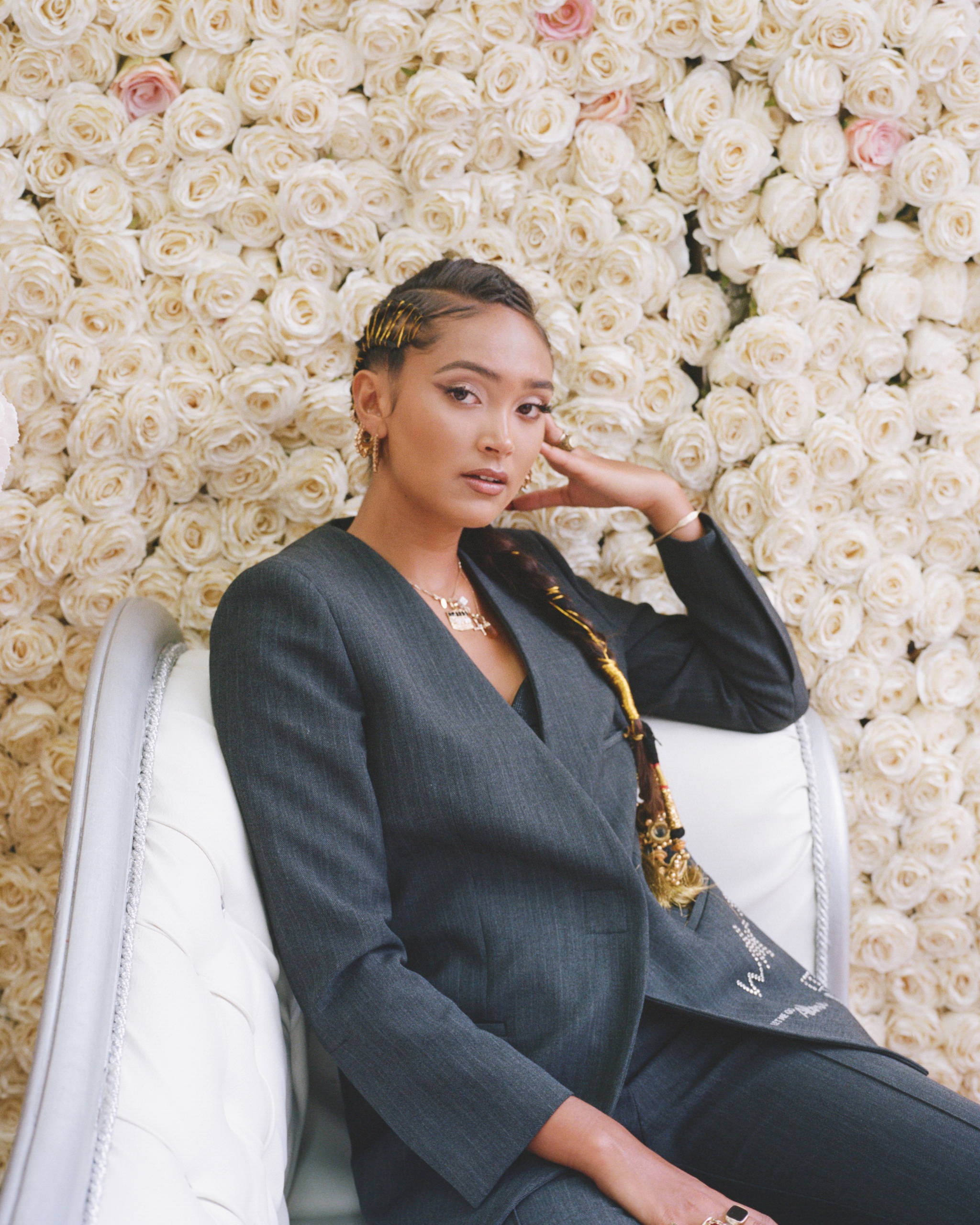 Joy Crookes has not only one person working to get her shoot ready when I talk to her, but three. Surrounded by friends and crew, our interview is a little chaotic, interjected with shouts for food and the south Londoner telling me what she’s getting her boyfriend for his birthday. Throughout, she apologises for not being able to face me; however, it doesn’t stunt our conversation whatsoever. Anyone that spends five minutes with the her would be able to tell that she’s kind, passionate and always has a story to tell.

All of this I had already expected, from listening to her third EP “Perception”, released earlier this year in May. Over five tracks, it moves away from the raw emotion that characterises her previous work. “I think it's just a little bit more self-assured,” she explains, highlighting the intuition and observational insights she’s gained with age: “Because I can look outside.”

Instead, each song is a stand-alone meditation, using external influences to guide personal reflection and tell a story – from “Hurts”, which details a failing friendship, to “Darkest Hour”, which explores Crookes’ unconditional relationship with her father, narrating how journeying into adulthood comes hand in hand with realising your parents’ flaws.

Crookes has been painted as self-assured since she entered the music industry at 15. Countless interviews describe her as down-to-earth, and yet wise beyond her age. She doesn’t see herself as older than her 20 years, however, musing: “I think it's just that people find it amazing that someone can be assertive.” Although happy she can demonstrate this quality when making music, she also explains that it’s not necessarily a blessing:“I've just had to stand my ground a lot in my life.”

One such instance occurred early on in her career, while working with a producer whose ego forced her writing, previously a point of refuge, to become static and rely on his direction. “I was the victim,” she says frankly, “even though I hate saying that.” Her advice for women in similar situations is to “try and take things into your own hands and don't believe you can’t do it.” Crookes has lived what she’s preaching – she untied herself from his influence by teaching herself, in just three weeks, to produce her own music instead. 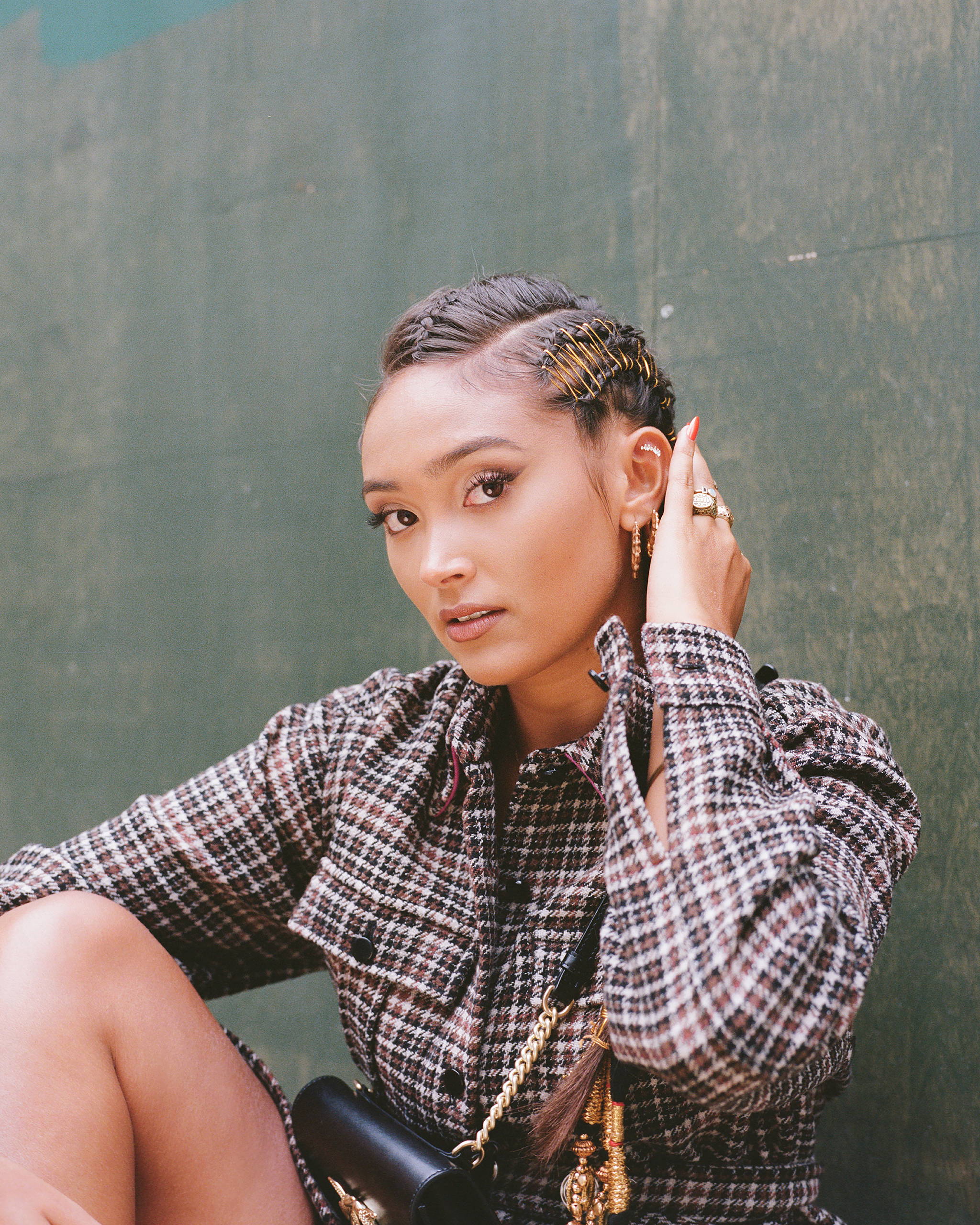 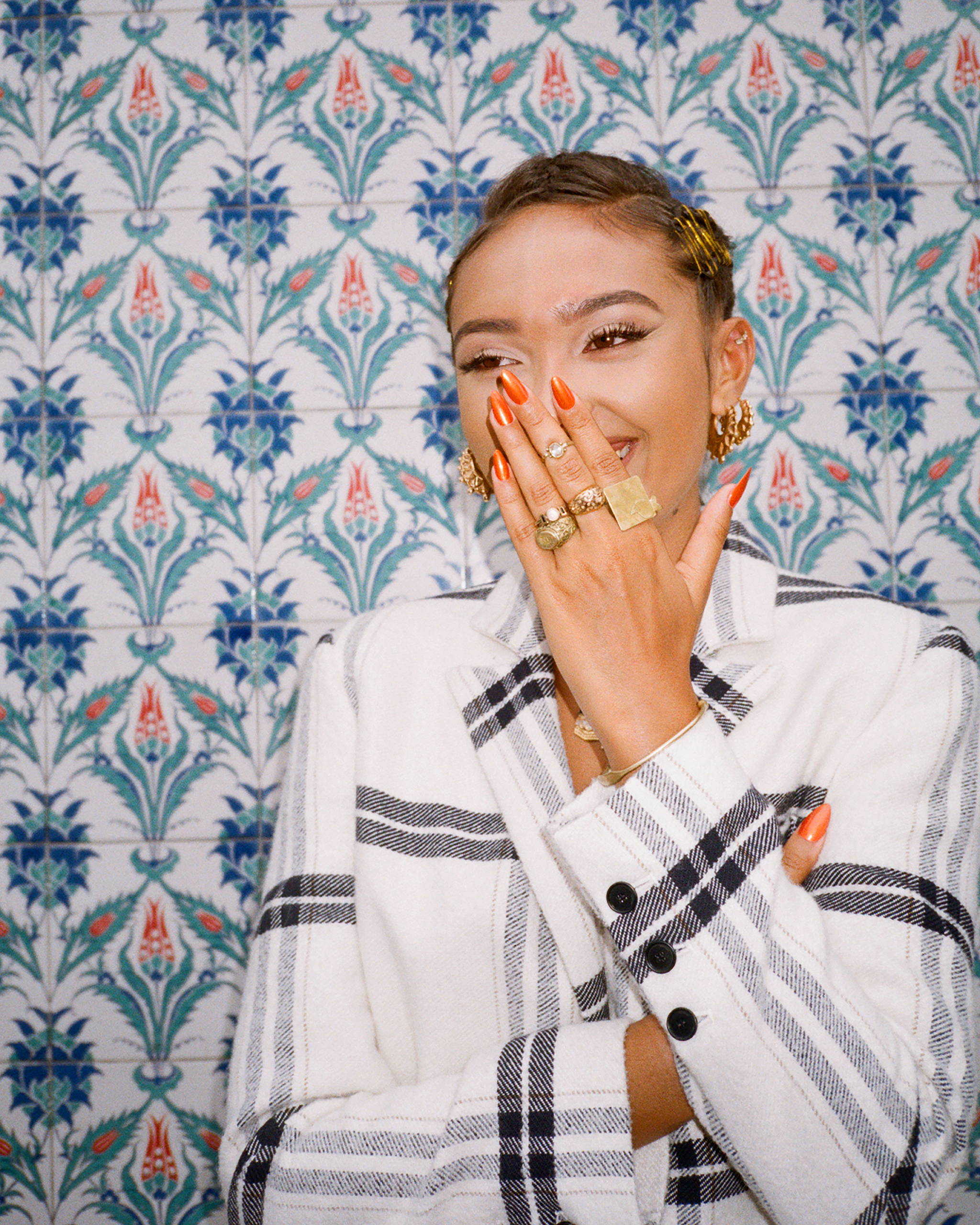 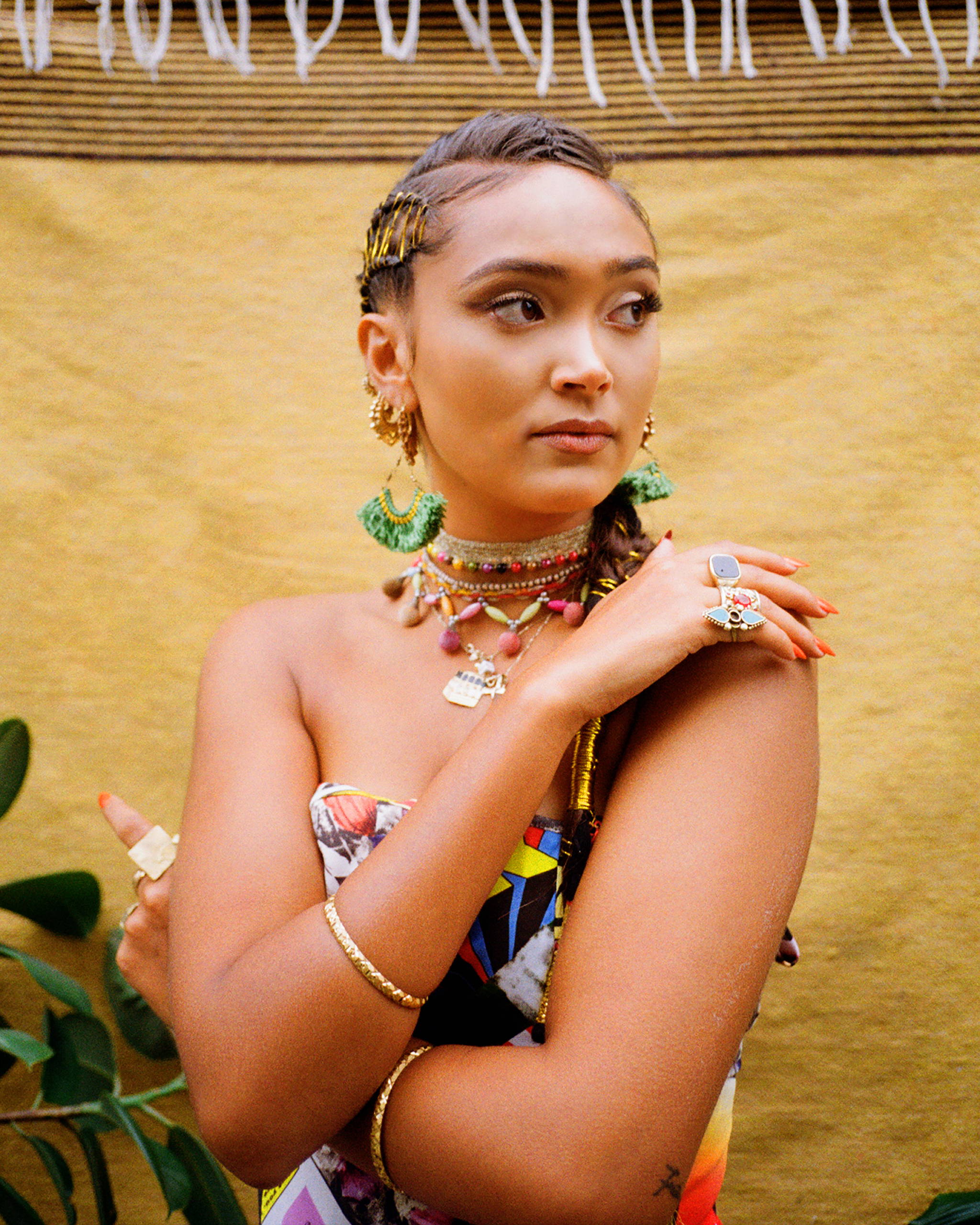 All clothing by Pinko, all jewellery Joy's own

“It's very easy to believe that production is a man's job. Or even being an Uber driver…” She adds, telling me it’s something she’s actually been considering doing lately on the weekends, as she finds talking to strangers therapeutic. “You just don’t hear about women being taxi drivers. Imagine going into an Uber and seeing a young, female driver. I don't know. I just feel like a lot of women are made to believe that a lot of spaces aren't made for us, but it's not true.”

While social issues are a recurring theme throughout her discography, Crookes also underlines that her inspiration is varied, as she’s heavily influenced by the music she’s currently listening to. Growing up, her musical education was rich, as polarised as reggae compilation albums and The Pogues. Currently, she cites London rapper Little Simz and the Breaking Bad soundtrack as some of the things she’s into, so really, it’s no wonder her music doesn’t easily fit into one genre. While the media seems to have labelled her ‘trip-hop’ and her friends have described her sound as ‘brunk’ (brown punk), she says she’s happiest with ‘alternative’, preferring to be “wishy-washy” than boxed in.

Not all of her influences are disparate, however, and Crookes references travelling back to her mother’s country of birth, Bangladesh, as a grounding experience, allowing her to live in the present and observe life from new perspectives. “You know, my blood is there, my ancestry is there and it's just a reminder that I've come so far – not only in myself, but for my family,” she says, explaining this connection beautifully: “It's the thing that keeps you going. It's the thing that makes you strong.” In turn, this grounding facilitates freedom and vulnerability in her songwriting – something she describes a little less beautifully: “It's a bit like when you're relaxed and you're on the toilet. It just comes out easier. But I mean, like, metaphorically, with songs…”

As well as connecting with her own ancestry, Crookes has made a concerted effort to integrate her family into her music, inviting them into her world and us into theirs. Her self-directed video for 2017 track “Power” features a handful of her friends, as well as her mother and grandmother (who she says insisted on wearing red lipstick to film, not caring that it would be shot in black and white). Written in ten minutes after a group of them got together to air their grievances, the song stands as a celebratory ode to the women in her life, warning: “You’re a man on a mission, but seem to forget – you came here through a woman, show some fucking respect.” 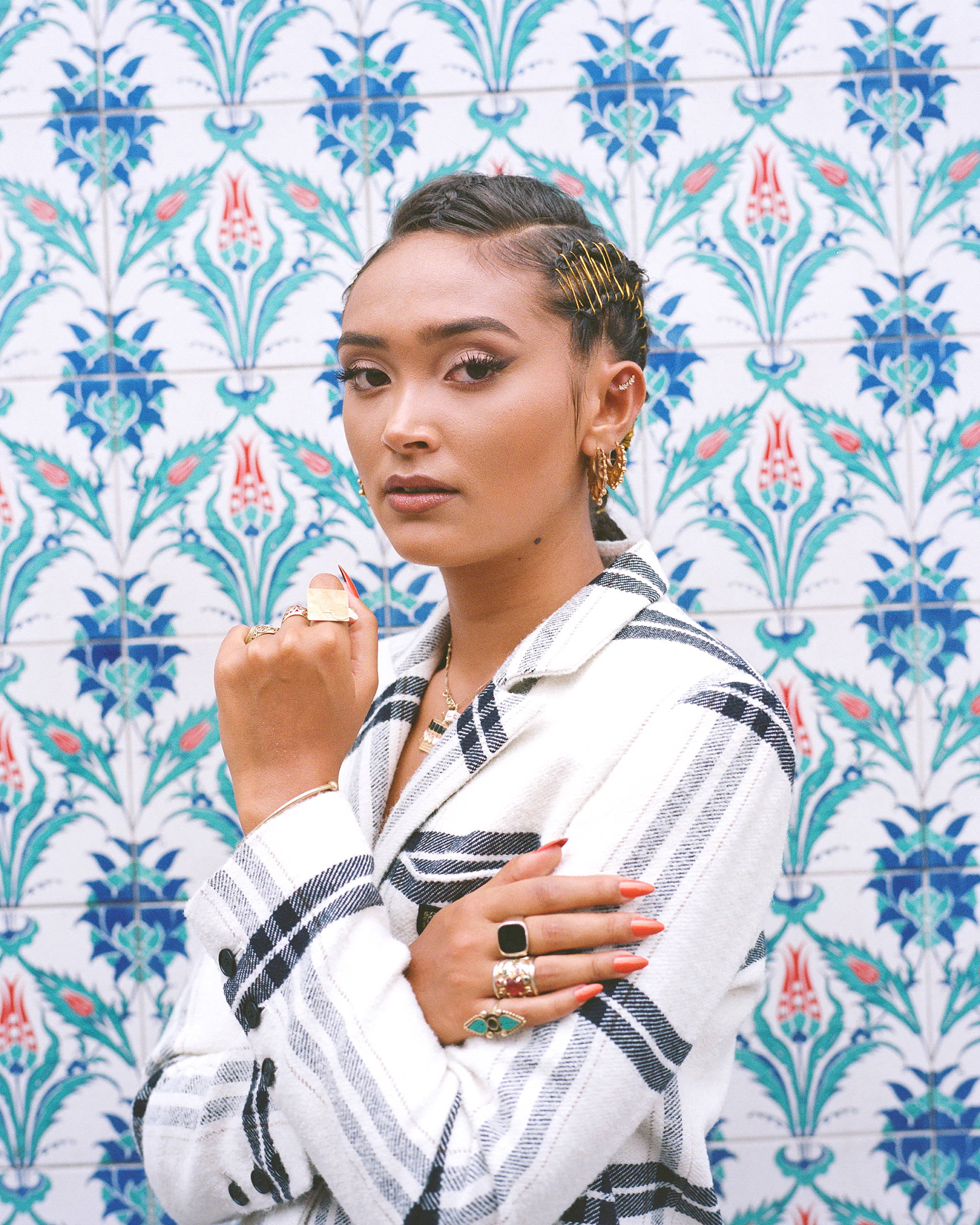 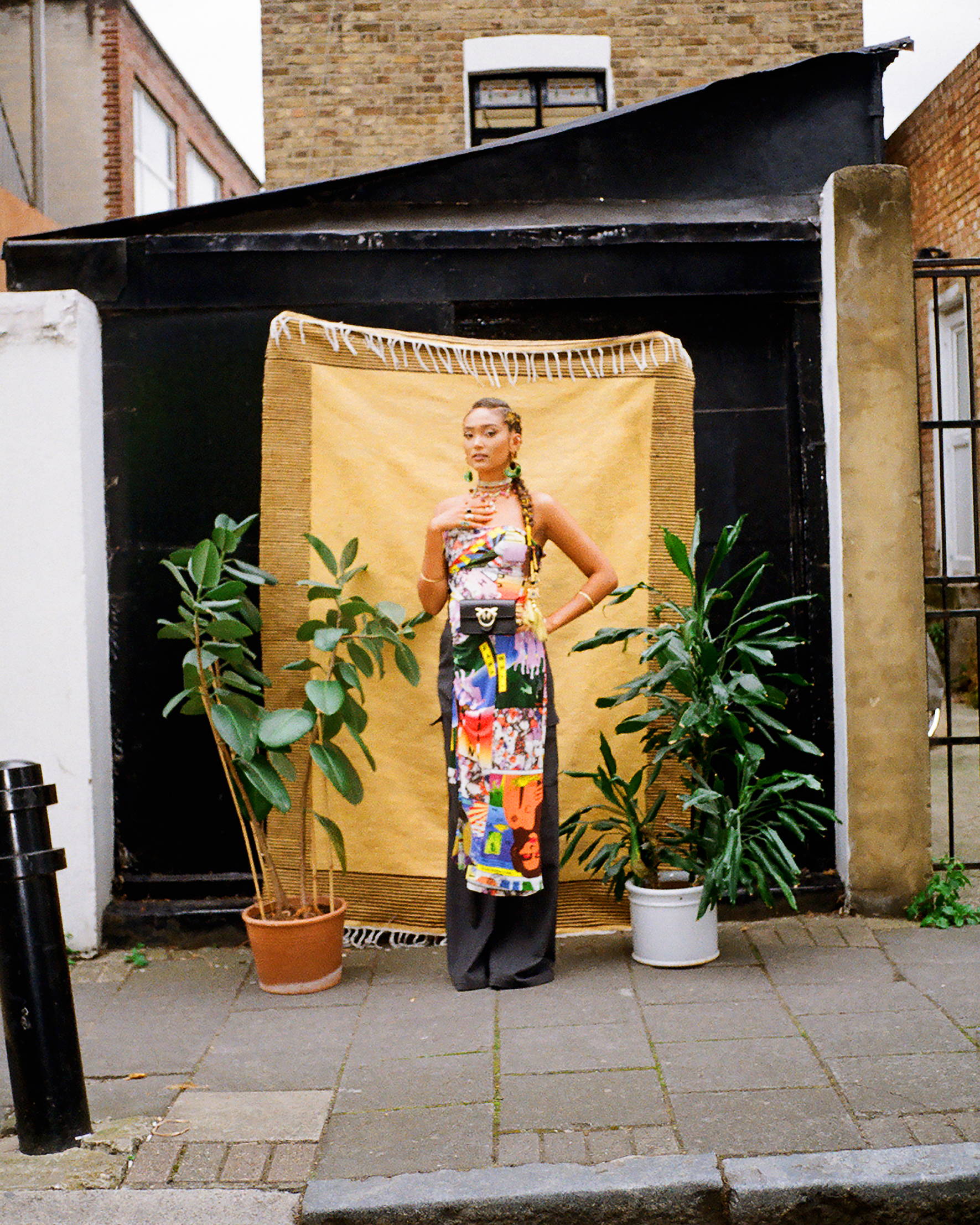 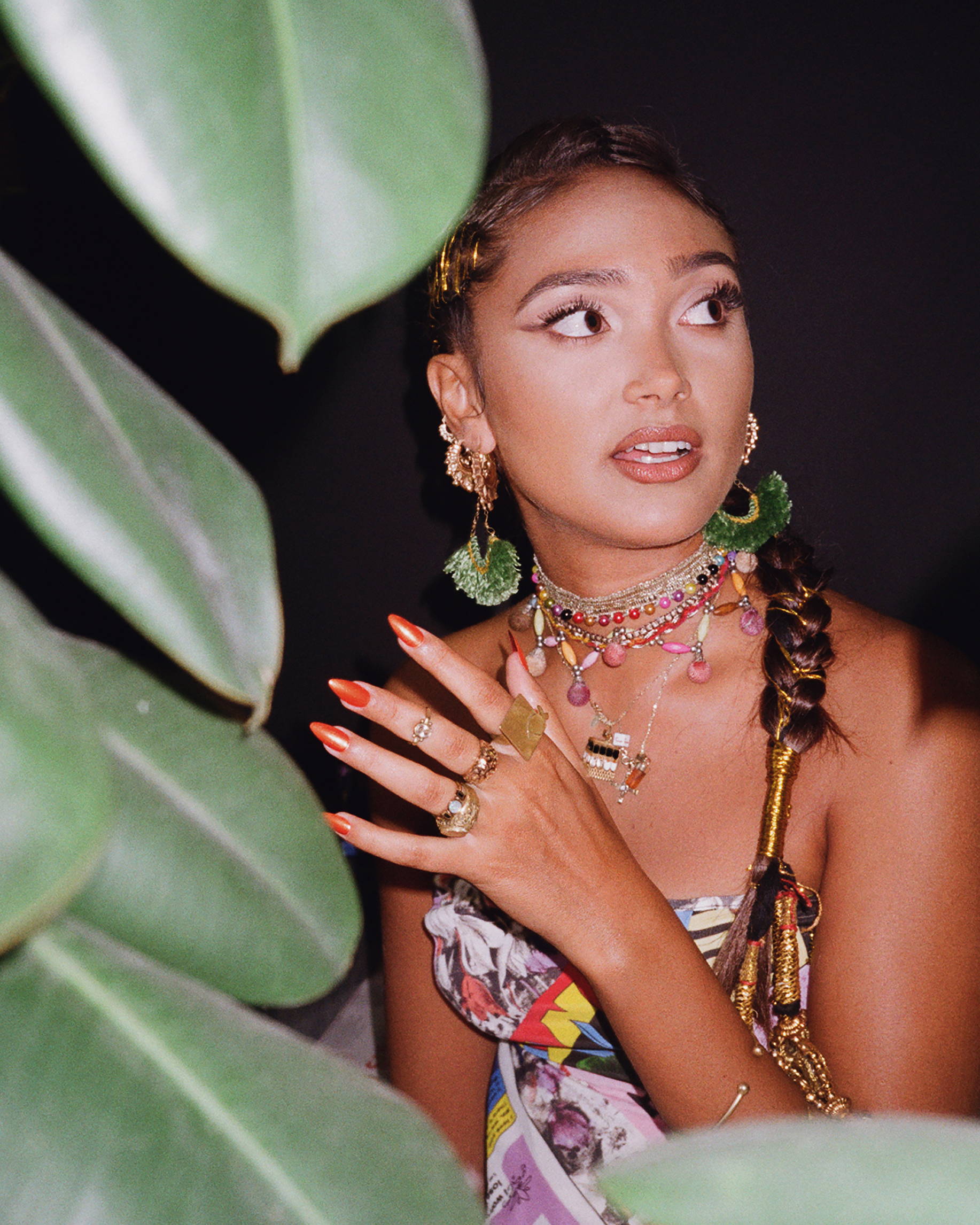 All clothing by Pinko, all jewellery Joy's own

I ask if Crookes thinks every artist has a responsibility to use their platform to further a political message. She shakes her head: “Not every artist can. Some people just want to make music that makes you feel good, and I respect that.” But as she notes, her songs aren’t really about sex, money or rock ‘n’ roll – “though they are obviously the main components of my life right now”, she jokes, slouching back in her chair with a handful of olives.

“London Mine”, for instance, is a nostalgic love letter to her city, written in response to the Windrush scandal last year, with overt anti-gentrification themes. I ask her about the 2011-2014 demolition of the Heygate Estate – a block that housed thousands in the centre of Elephant and Castle, the area where Crookes grew up – and similar measures radically changing the spaces she knew and the security of immigrant communities who have made a home there. “The worst part about gentrification, is that we all didn’t know how we could have stopped it,” she considers. “I think the devastating thing for me, if we're going to get deep, is just the fact that these people come over to this country, they think they’re building a community, and then they’re not wanted there either.”

“London Palace Superbowl,”she says immediately, when I ask about her favourite place in south London, a place she could take someone to that still feels like home. “They only play reggaeton or dancehall and it's just so fun. You get all these Colombian families, African families and Asian families. It's just amazing, but it's not there anymore. So, there you go – there’s my gentrification point.”

She also tells me about where she’d take somebody for food: “Nandine’s! It’s a chain run by family friends. They’re a Kurdish family; I grew up next to them. Their dad used to own the corner shop next to my dad. The food is incredible and so full of flavour, so probably there. I think it would be a bit bait if I took someone to Morley’s...”

A few days after we speak, Crookes drops a self-produced cover of Kendrick Lamar’s “YAH / ELEMENT”, announcing an autumn UK and European tour alongside it. Before setting off she’ll release a new single, and looking into the new year, she tells me there’s an album on the way. Really, we shouldn’t be surprised that new music is consistently in the works – if Crookes has made us sure of anything so far, it’s her gift for storytelling. And when you’re as perceptive, open and spirited as she, there’s always a new tale to tell.

Before we part, we’re back to food. She tells me it plays a large role in her life, and not so long ago, she started a video series, ‘Cooking with Crooksie’, inviting different guests round to chat and experience her dishes. As well as offering tips for the perfect spag bol (spoiler: it’s a bottle of red), Crookes is applying the lessons she’s learnt from cooking into her daily life. “Know your intolerances,” she laughs: “If people make you feel queasy, then you’ve got to leave them.” Walking away and thinking about our interview, I didn’t feel queasy at all.