Propelled to fame in 2017 with a recurring role as Archie in teen television series Riverdale, New Zealand actor KJ Apa is destined for a life in Hollywood that couldn’t be further from home. While filming the show’s imminent fourth season in Vancouver, Apa caught up with Willa Bennett to reflect on his career so far, and why he’s open minded about whatever comes next. 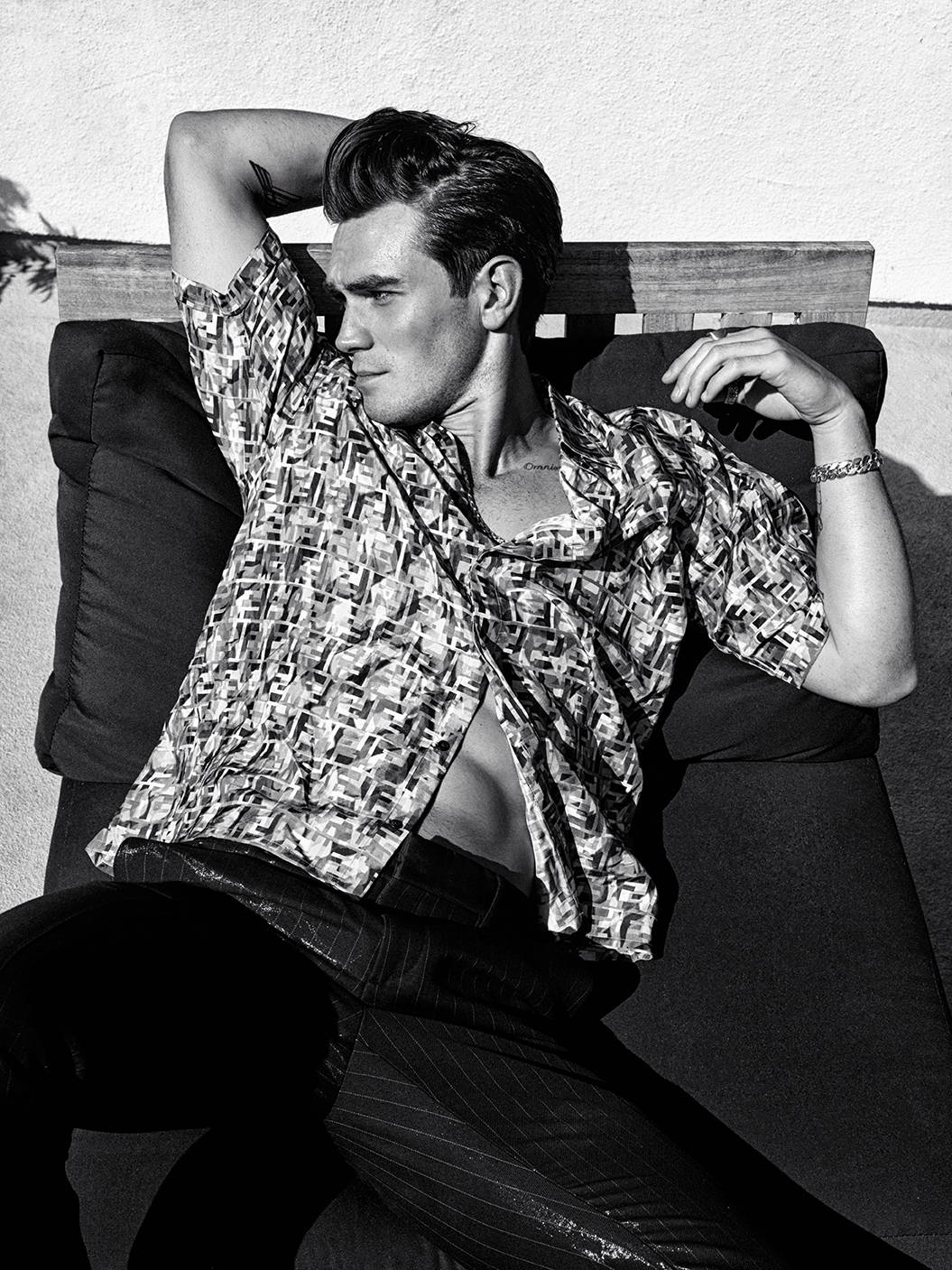 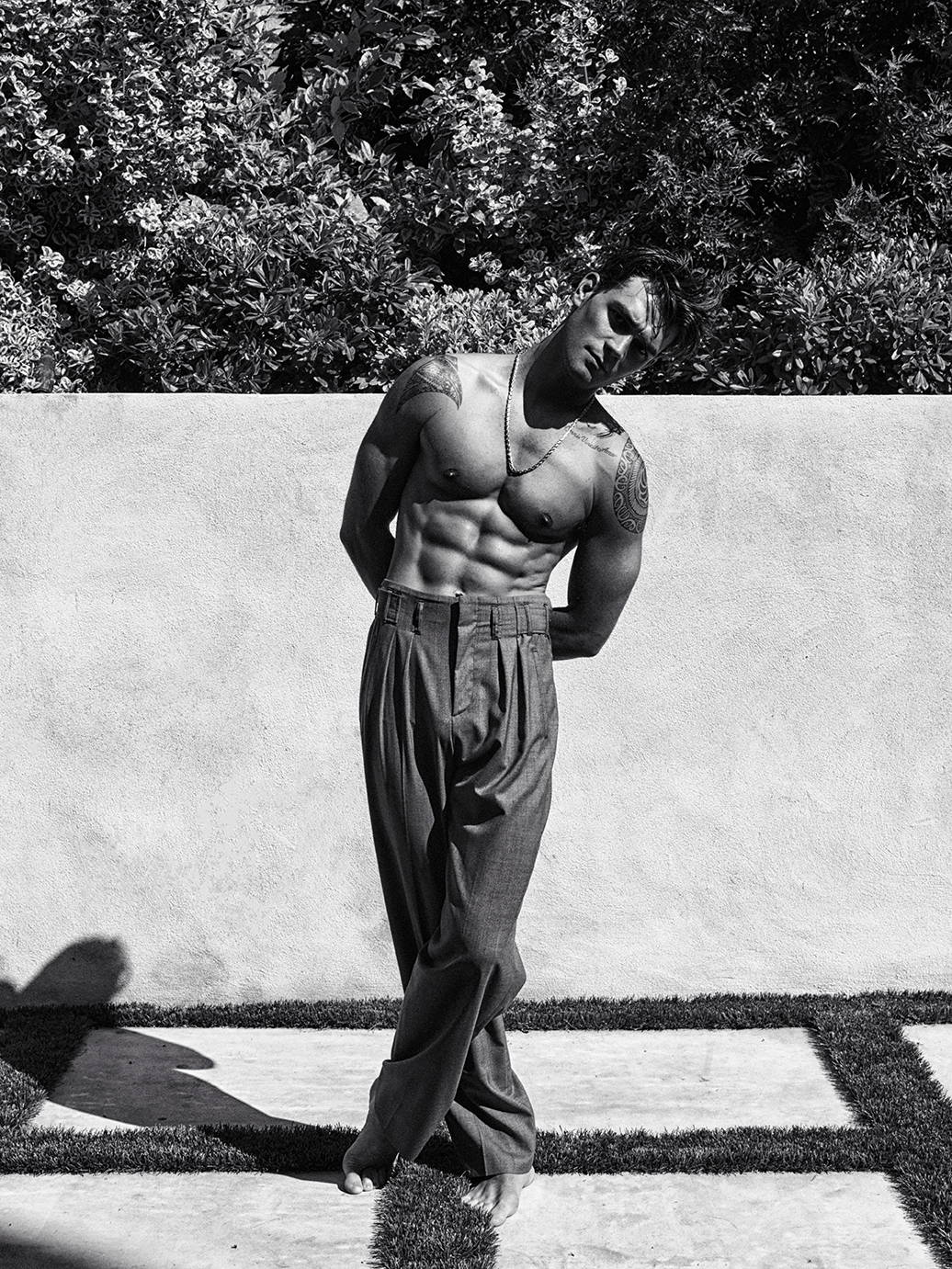 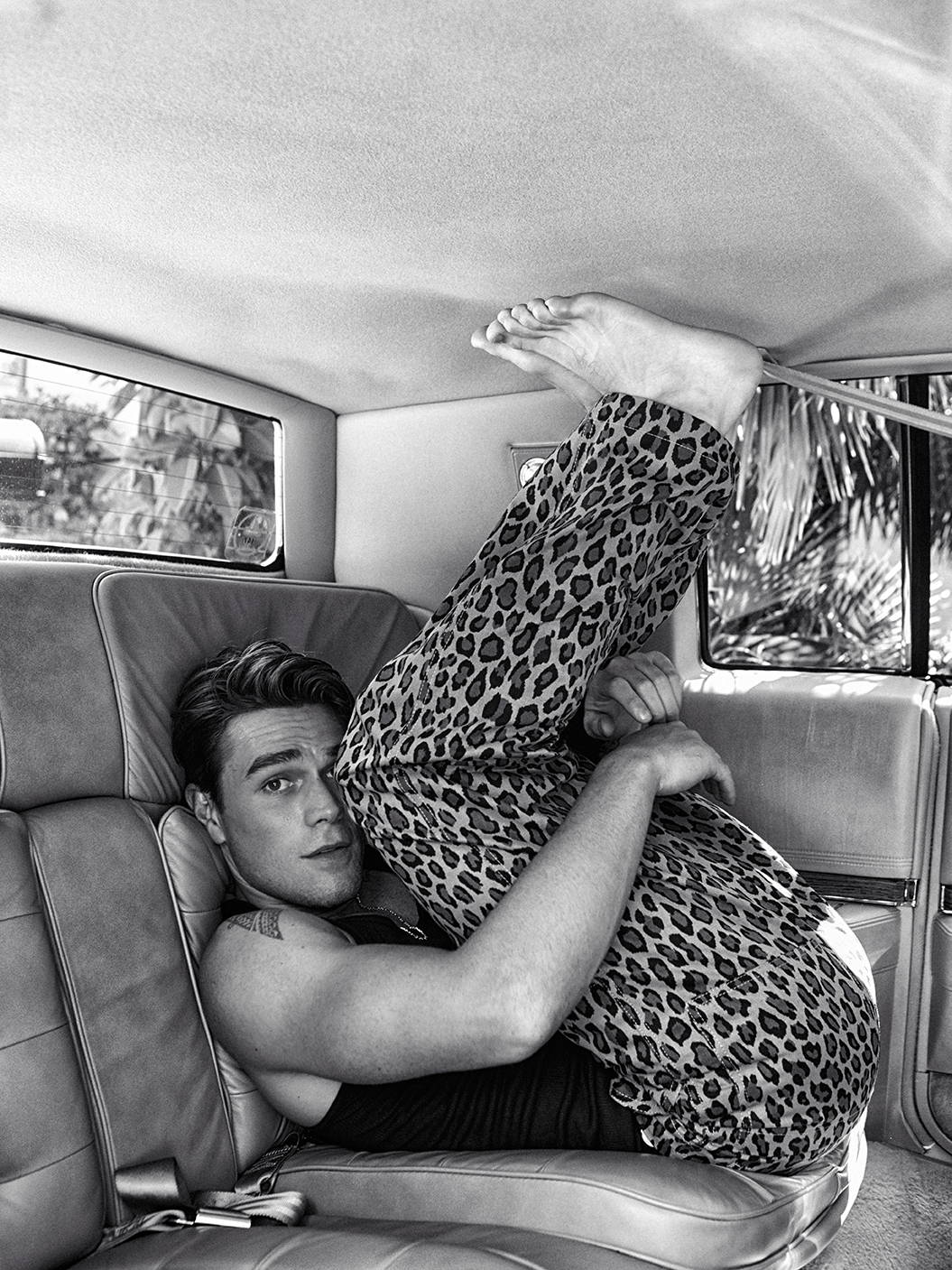 For someone who seems so casually self-assured, it’s almost strange to imagine that KJ – born Keneti James Fitzgerald – could still be figuring out what he wants to do with the vast platform he’s built. But even with thousands of miles between us, Apa’s comfort with the unknown feels genuinely sincere. After all, it’s an ability to thrive outside of his comfort zone that’s guided the actor’s prodigious rise.

Born in Auckland, New Zealand, Apa was raised surrounded by the arts. “My dad is a musician and my mum writes and paints. I grew up watching people create,” he says fondly, highlighting that his own interest in performing was nurtured from a young age: “Creativity was always encouraged in my household growing up. I consider myself lucky to have parents who have always supported what I am passionate about.”

Apa landed his first acting role aged 16, when he auditioned for New Zealand prime-time soap opera Shortland Street and took on the character of troubled teenager Kane Jenkins – a part he’d play for a year and a half before leaving to pursue a bigger dream in LA. Just a few months later in 2016, he found himself immersed in a world-wide search for the actor to play Archie Andrews in The CW Network’s teen drama television series Riverdale, and, after playing guitar in one of his auditions, won the role.

Within weeks, Apa was catapulted into a filming schedule notorious for 16-hour days, alongside photoshoots, press junkets, interviews and instantaneous, relentless recognition. Just one successful audition in America propelled him to a breed of stratospheric fame that’s almost impossible to prepare for, and it’s refreshingly clear that Apa wasn’t prepared at all.

“I think I first realised that Riverdale was going to be a hit show after my social media exploded,” he laughs incredulously. As much as an Instagram follower count of 16 million might feel incomprehensibly obscure, Apa is grateful for the opportunity for self-expression it provides, asserting that “having a platform has definitely given me the opportunity to reach out to millions of people I could not have beforehand.” 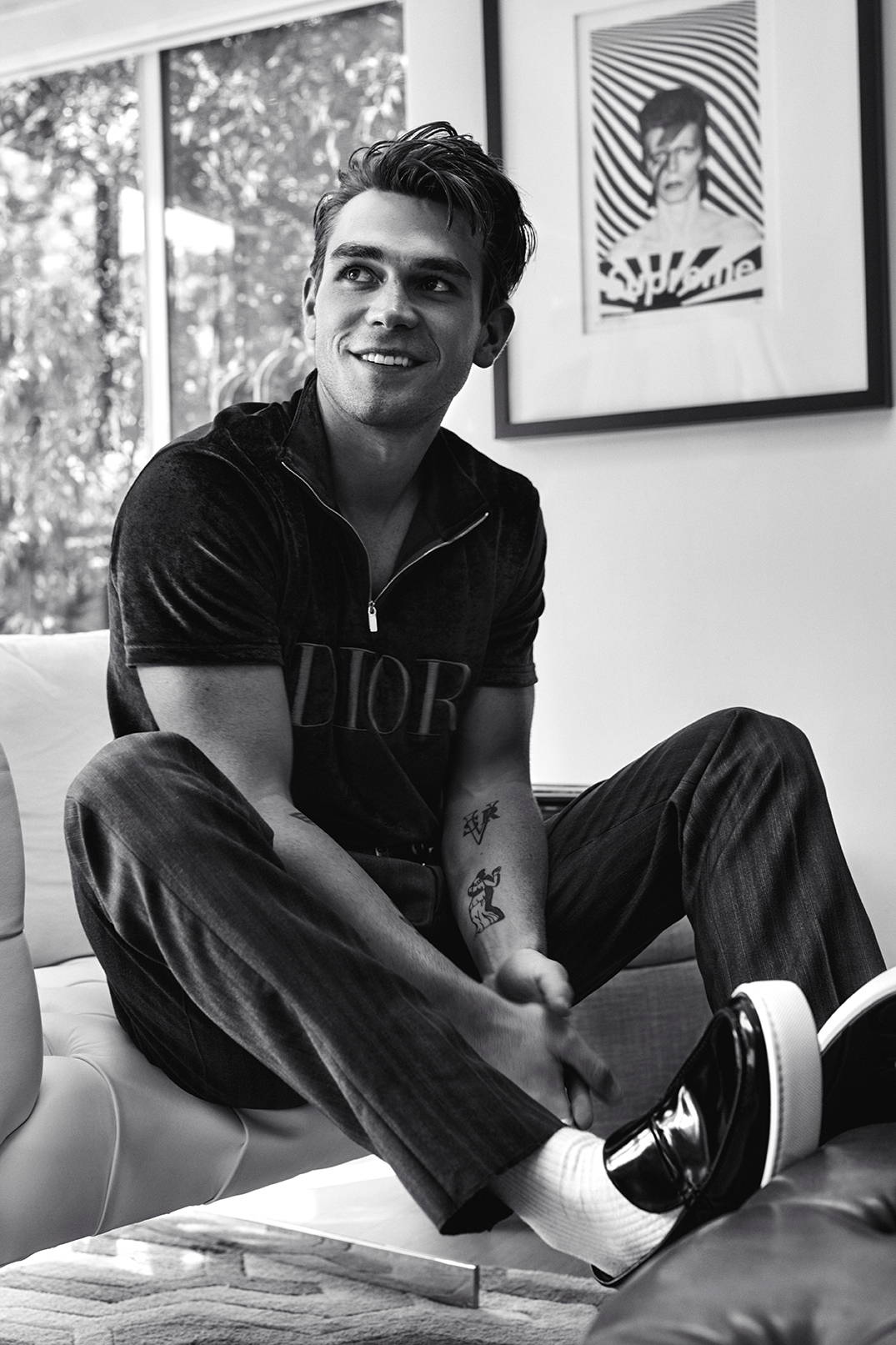 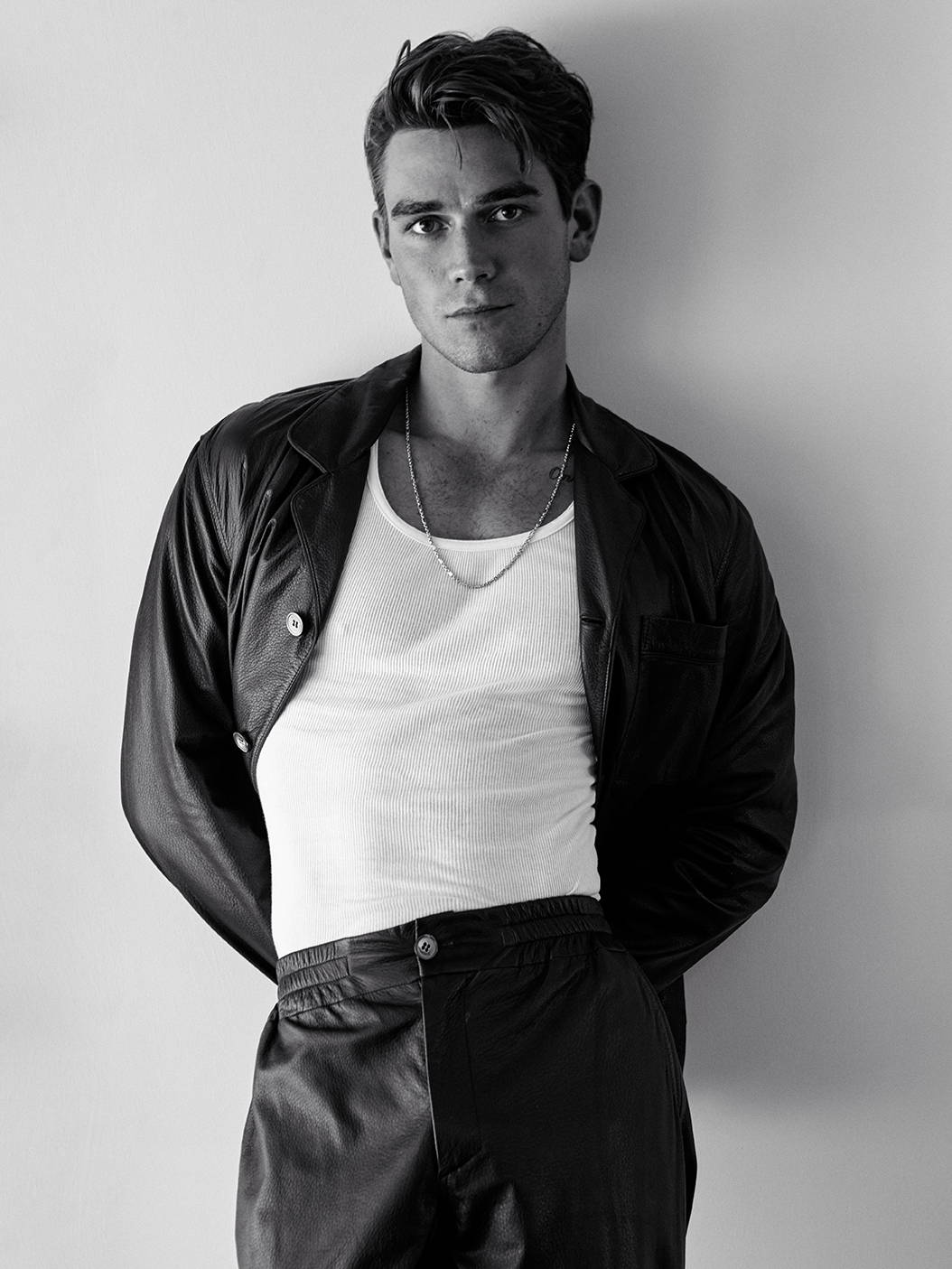 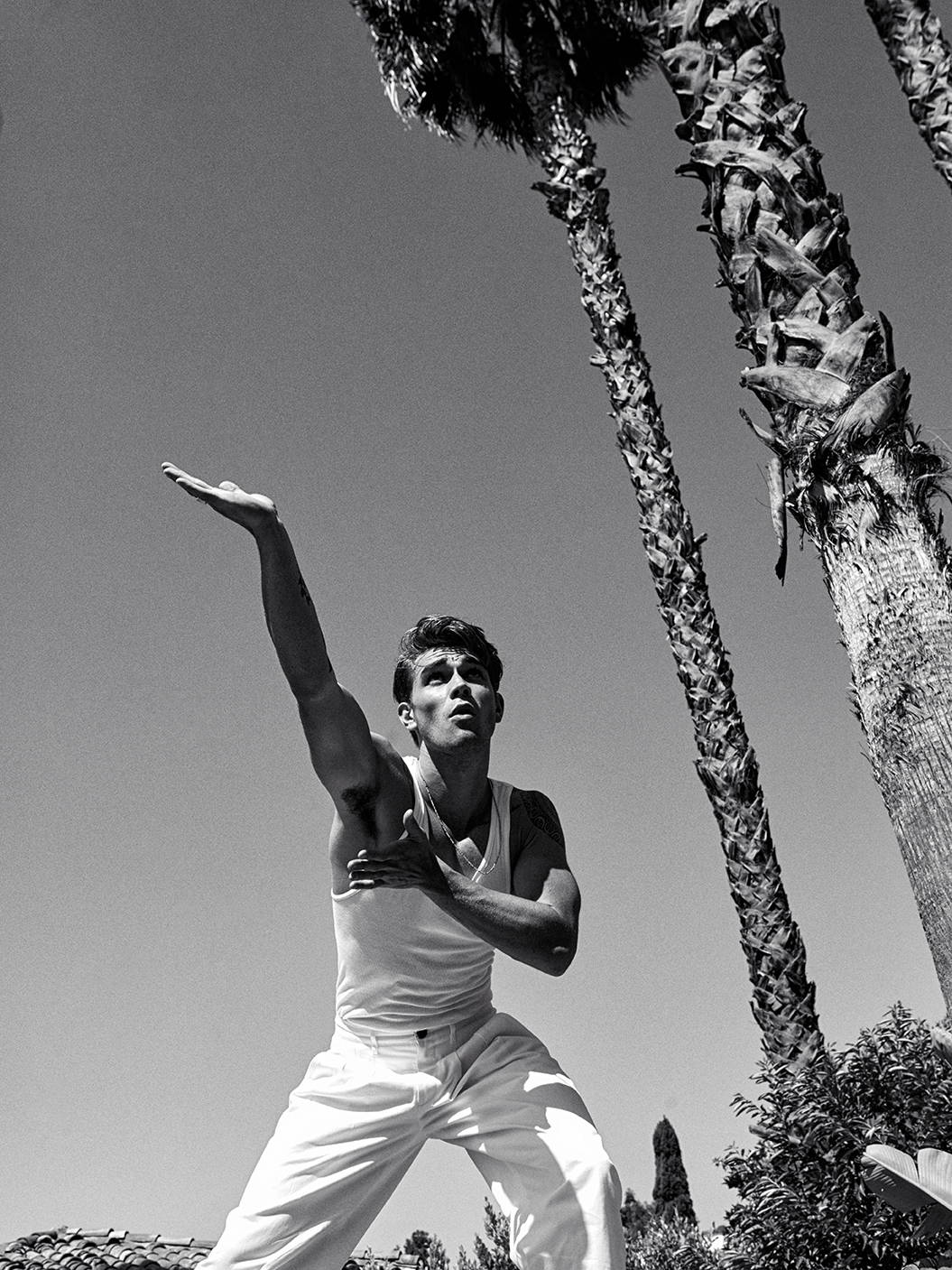 Top and trousers by Dior and shoes by Christian Louboutin

Jacket and trousers by Salvatorre Ferragamo and top by Calvin Klein

Based on the cult Archie Comics series, Riverdale’s success speaks to a larger cultural zeitgeist, and has become a cultural phenomenon in its own right since its debut in January 2017. Following main characters Archie Andrews, Betty Cooper, Veronica Lodge and Jughead Jones (played by KJ Apa, Lili Reinhart, Camila Mendes and Cole Sprouse respectively), as they navigate the hyperbolic intricacies of their fictional small town. Despite the fact that its quasi-supernatural themes might not set out to reflect a hyper-real high school experience, the show has resonated with millions of young people around the world for its depiction of friendship, relationships, familial bonds and the inevitable turbulence of grappling with identity through adolescence.

Aspects of his character are certainly relatable for the 22-year-old actor too. “[Archie and I] both love music and value friends and family,” Apa considers, noting that: “We’re also different in lots of ways – I don’t really have red hair! And I know absolutely nothing about football…” But unlike his character – who has to choose between the two loves of his life, football and singing, as well as his relationship with on-screen girlfriend Veronica and safety from her tyrannical father – Apa’s fans are supportive of his various interests and aspirations, especially his music band The Good Time Boys (also featuring co-star Rob Raco), which Apa tells me he hopes to pursue further in the near future.

With Riverdale’s fourth season set to premiere in October, Apa won’t even hint at any spoilers or potential plot twists for the run, which will pick up after a season finale that left viewers shocked and concerned for the safety of Jughead. In light of the recent passing of Luke Perry, who played Archie’s father Fred Andrews, its first episode will honour the actor’s life with a special tribute and it’s this – “loosing Luke and dealing with getting back to work without him” – that Apa references when I ask about the greatest challenge in his career so far.

Anyone who’s watched an interview with the cast will attest to their well-documented close-knit bond, and throughout our brief conversation, Apa consistently finds ways to bring up the genuine, unconditional connection he holds with his co-stars. “Working on this show has been life changing,” he affirms: “I’ve learnt just how important every single person on set is when it comes to making a great finished product… Although we shoot at a really fast pace and things can get hectic, set is a really fun environment. My favourite days are the days where all of the core four are working.” 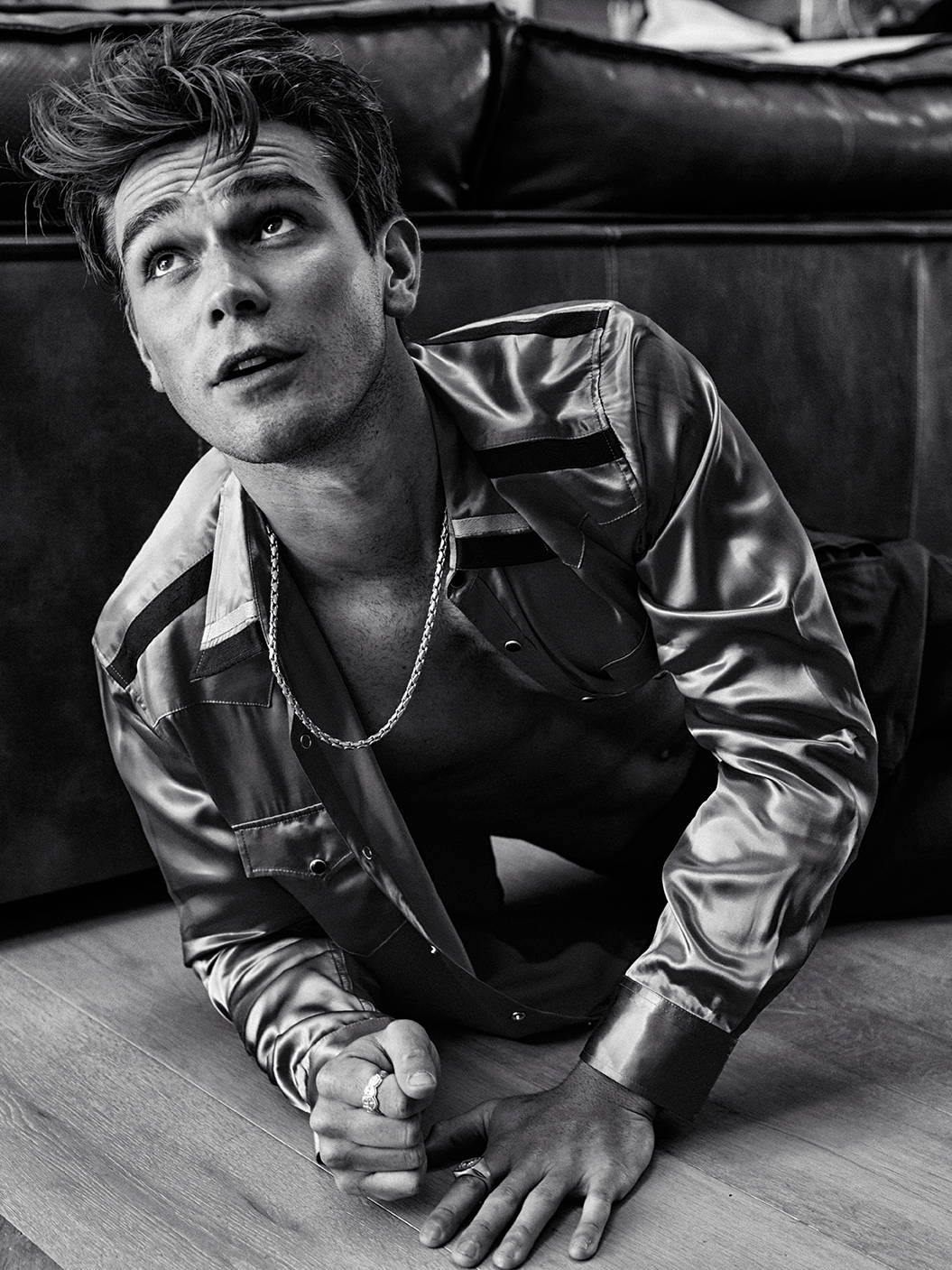 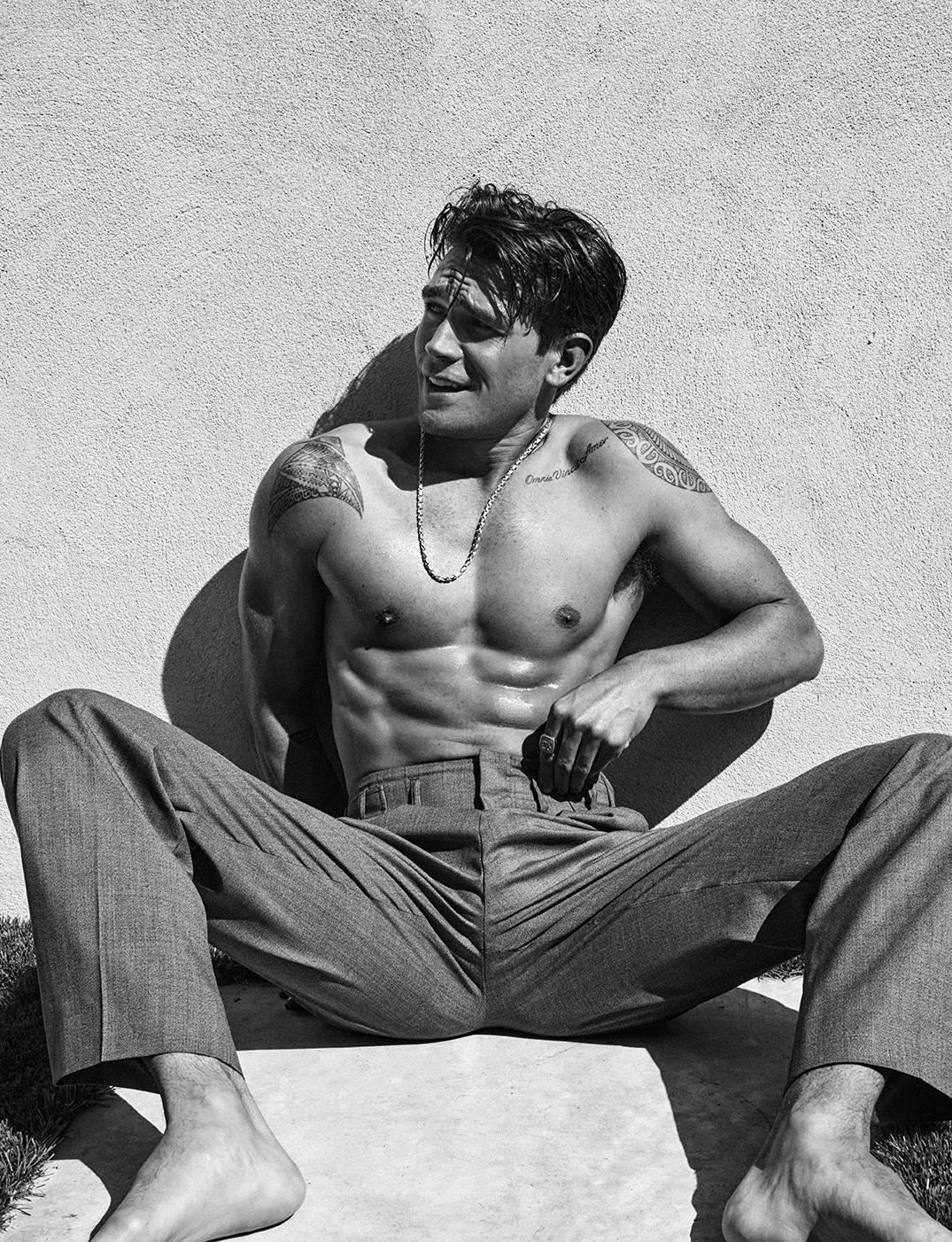 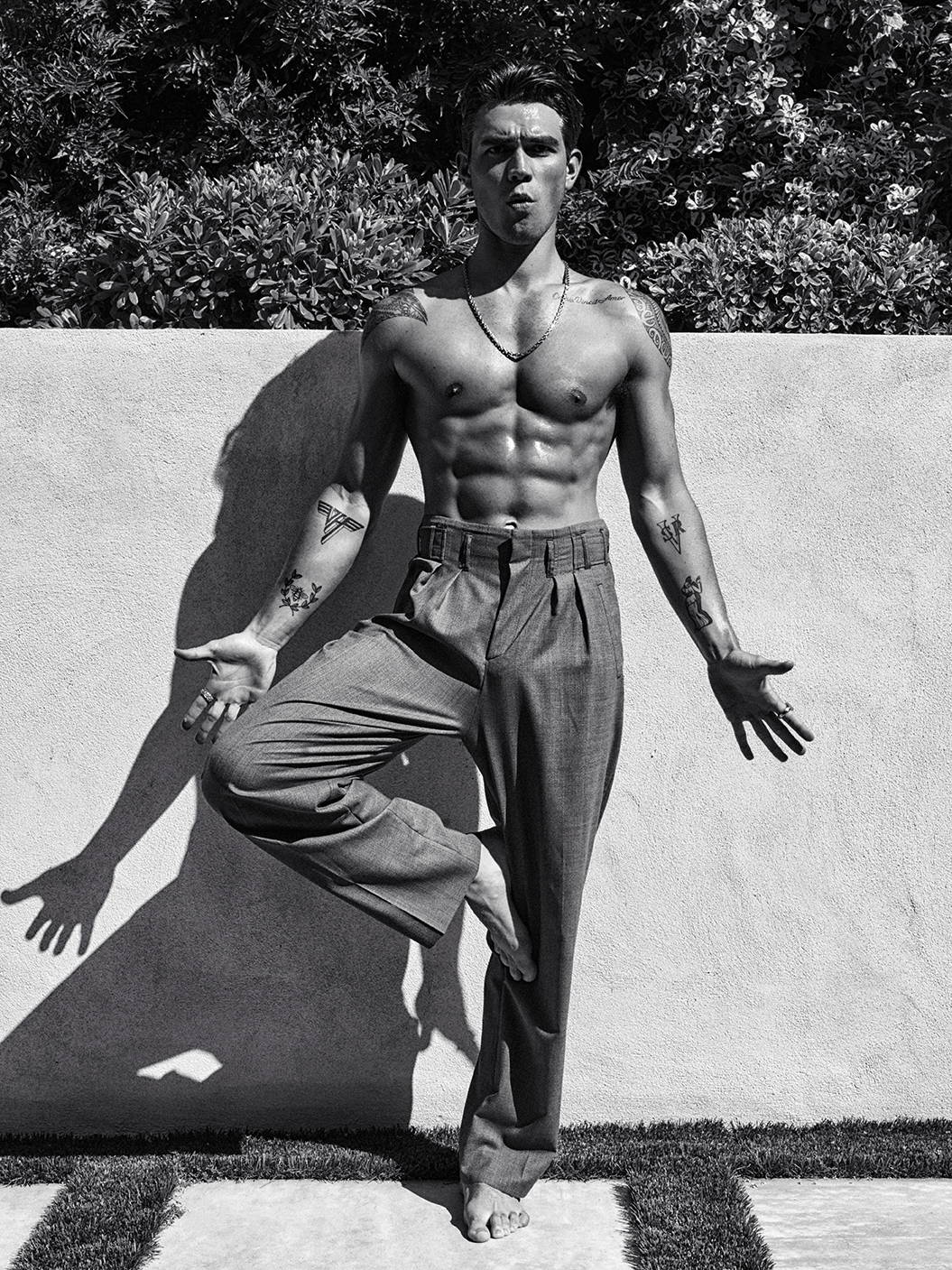 Shirt by Coach and jewellery by David Yurman

Trousers by Maison Kitsune and jewellery by David Yurman

While Riverdale production currently takes up the majority of the actor’s time, Apa has been gradually building up his presence in the film industry too. Having already picked up roles in A Dog’s Purpose(2017) and The Hate U Give (2018), this May he starred in Neftlix’s coming-of-age romantic comedy The Last Summer. It’s an impressively eclectic résumé, ultimately tied together by narratives tackling the complexities of growing up, falling in love and finding enduring friendships in turbulent, uncertain times.

This year Apa’s been working on Andrzej Bartkowiak’s forthcoming indie thriller Altar Rock, as well as filming Jeremy Camp biopic “I Still Believe”, directed by brothers Jon and Andrew Erwin. The project sees him take on the role of Camp (alongside Britt Robertson and Shania Twain, no less), documenting a story of love, loss and hope framed by the Christian music star’s career and personal relationships. “Working on the film I Still Believe,” Apa decides with conviction, when I ask when he’s felt most fulfilled on set so far. “Because it is a true story, and doing it justice was just for me. There’s a feeling you get when you know a scene went well. You can feel it, and so can everyone else.”

Apa admits that “thinking back, life seemed a little more simple” before experiencing the pandemonium still surrounding Riverdale,joking that “only God knows” what he’d be doing if his path hadn’t been influenced so decisively by the series. He seems reluctant to look too far ahead to the future, returning to the notion that he’s still learning about himself and what he wants to do, but hoping the show “keeps going long enough for me to work that out.” What’s clear is that Apa will continue to move through life with an open mind, firmly grounded and consistently grateful – if not a little overwhelmed – by the opportunities he’s earned. Armed with an expanding repertoire of talents, a conscientious approach to his art and a disregard for the empty glamour of fame, it feels like his next steps could lead just about anywhere. Too soon, it’s time for him to return to filming – I’ve stolen three precious minutes more of his time than bargained for – but before we hang up, Apa agrees appreciatively: “Everything feels like it’s just the beginning.”