LFW AW22: London is Back and Better Than Ever 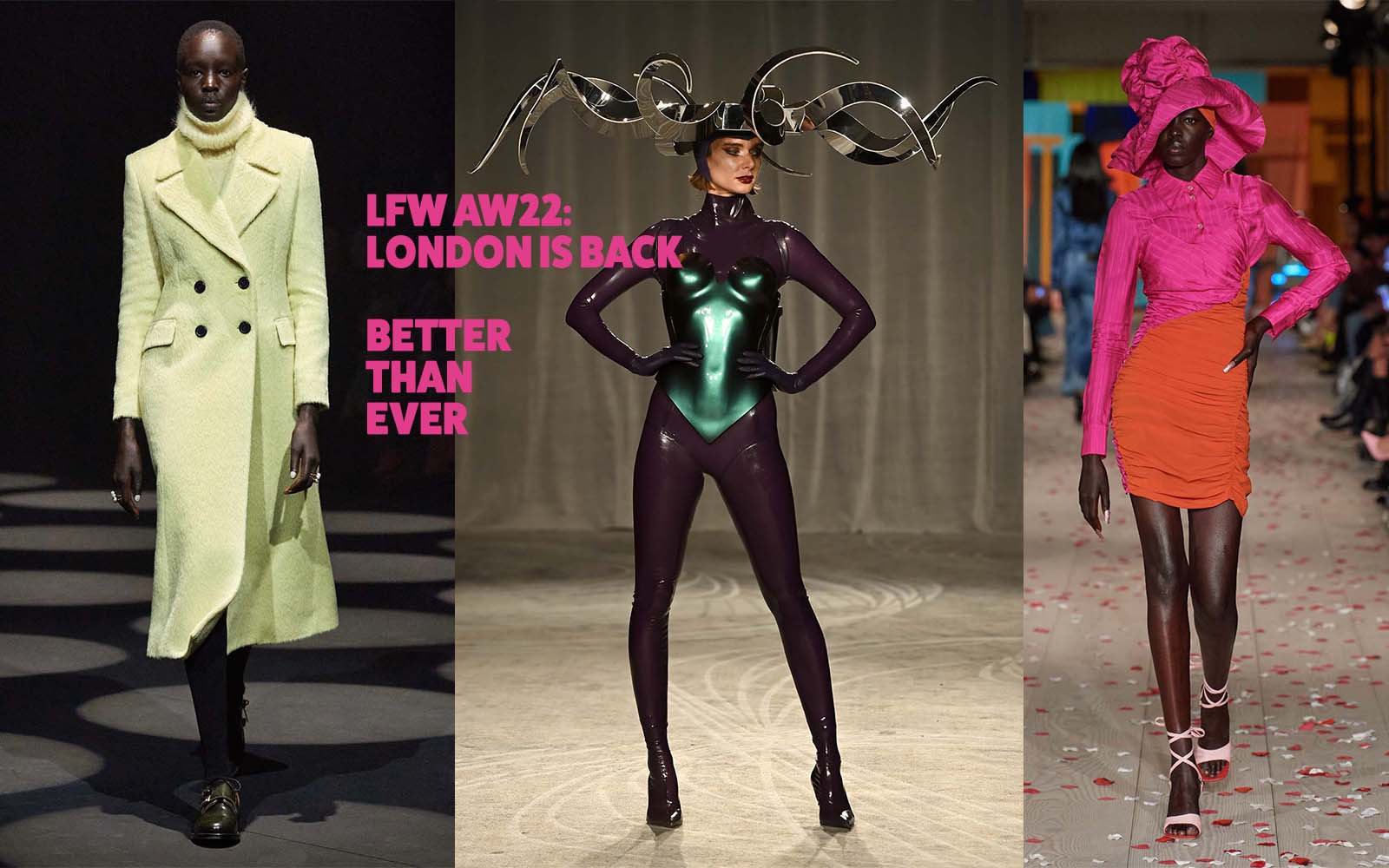 After a turbulent two years that forced fashion weeks around the globe into hybrid formats, London Fashion Week was back to prove why the capital is known as the cauldron of creativity.

Words by Jordan Wake
The catwalks were flooded with the work of visionary talent, the front row crowded with industry titans rubbing shoulders with the new kids on the block, the pavements outside rampant with streetstyle stars racing to their next show; all happening whilst an army of photographers clicked away at us. And for the first time in two years, the city felt like itself again. But what is fashion week without a touch of drama? The first day of the shows saw the wrath of Storm Eunice which resulted in the Met Office putting the city under a red weather warning. But as always, the show must go on! 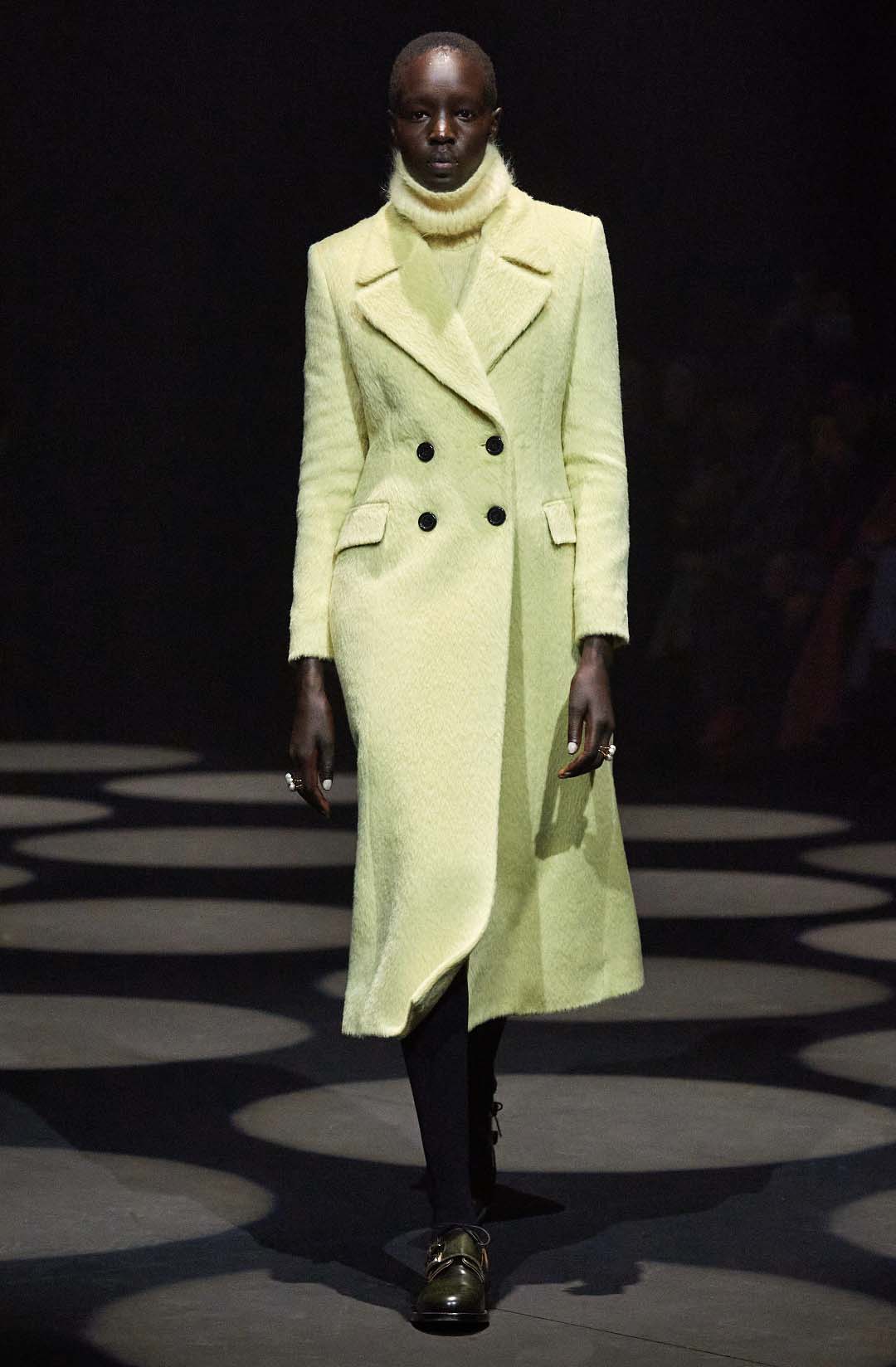 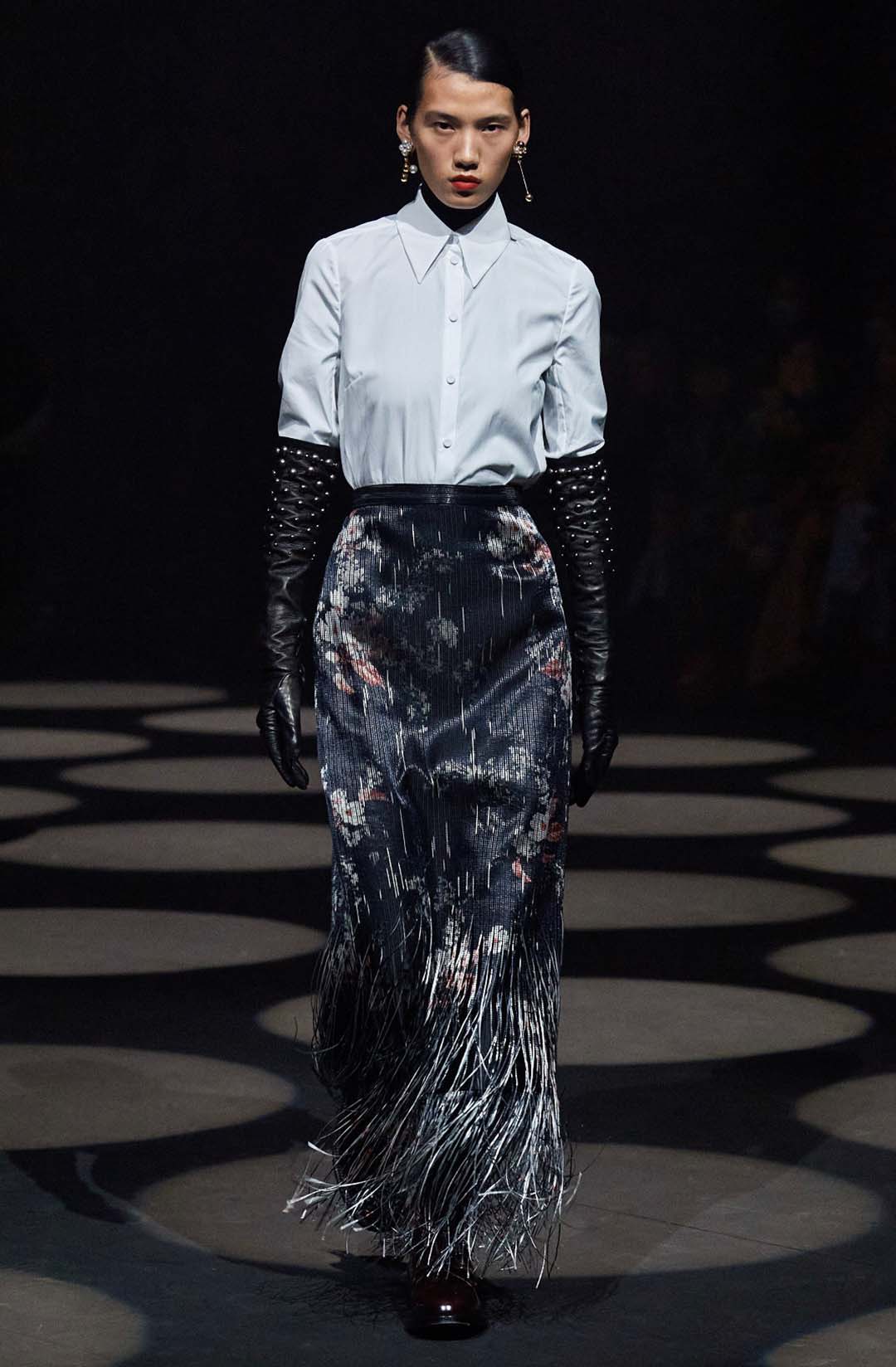 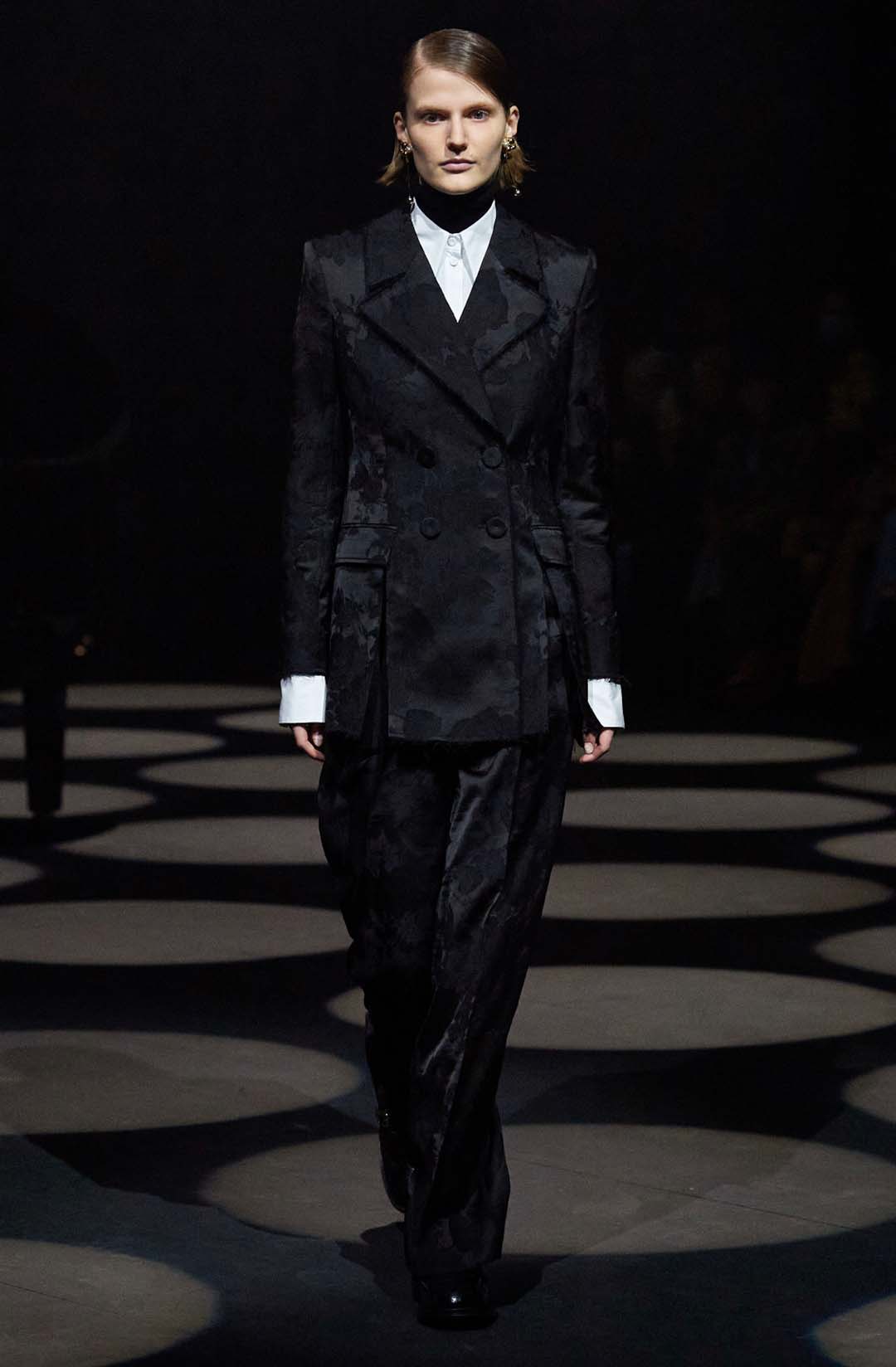 Incorporating inspiration from the fringe culture across early 1930s and the new wave of artists and photographers the time ushered in; Jeanne Mammen, Madame d’Ora, Elfriede Lohse-Wachtler, Anita Berber and Valeska Gert were all in the mindset of Erdem Moralıoğlu’s when constructing his AW22 collection. Not only capturing their ‘avant-garde expression’ and a period within history - whilst equally paving the designer’s own - but also injecting an underground club atmosphere as he gathered us into an enormous black box within Sadler's Wells.

It seemed eerily fitting, particularly now more than ever, that the designer should reference a time between WW1 & WW2 as the press notes read “Whispers of war are looming once again, but we don’t talk about that down here. For now, let the music play”. And just like that, it did. A lone pianist sat in the centre of the dark room and began playing a grand piano as the models walked through the spotlights to music as poetic as the clothes they were wearing.

A presentation of skirts, dresses, and coats married with a fringe fantasy hemline, double breasted floral suits, impeccably tailored mohair coats with a sorbet colour palette, and studded leather monochrome gloves accompanied with sequin scarfs. “I love the swoosh of a sequin” Moralıoğlu confessed backstage with a smile on his face after delivering yet another triumphant show. It appeared the designer wanted to remind us of the euphoria and escapism that clothing can offer us, and send a message that in times of chaos, creativity prevails. 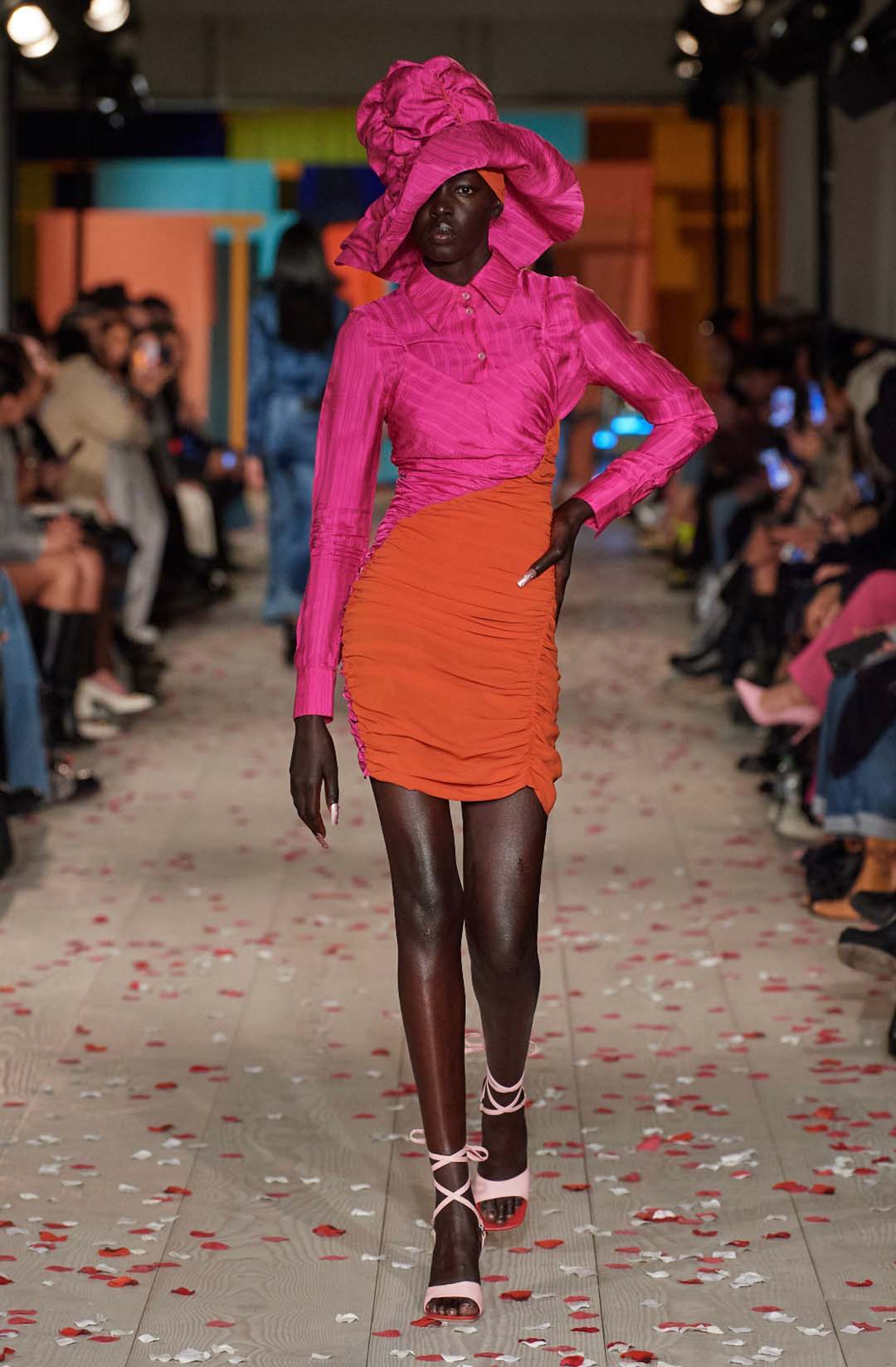 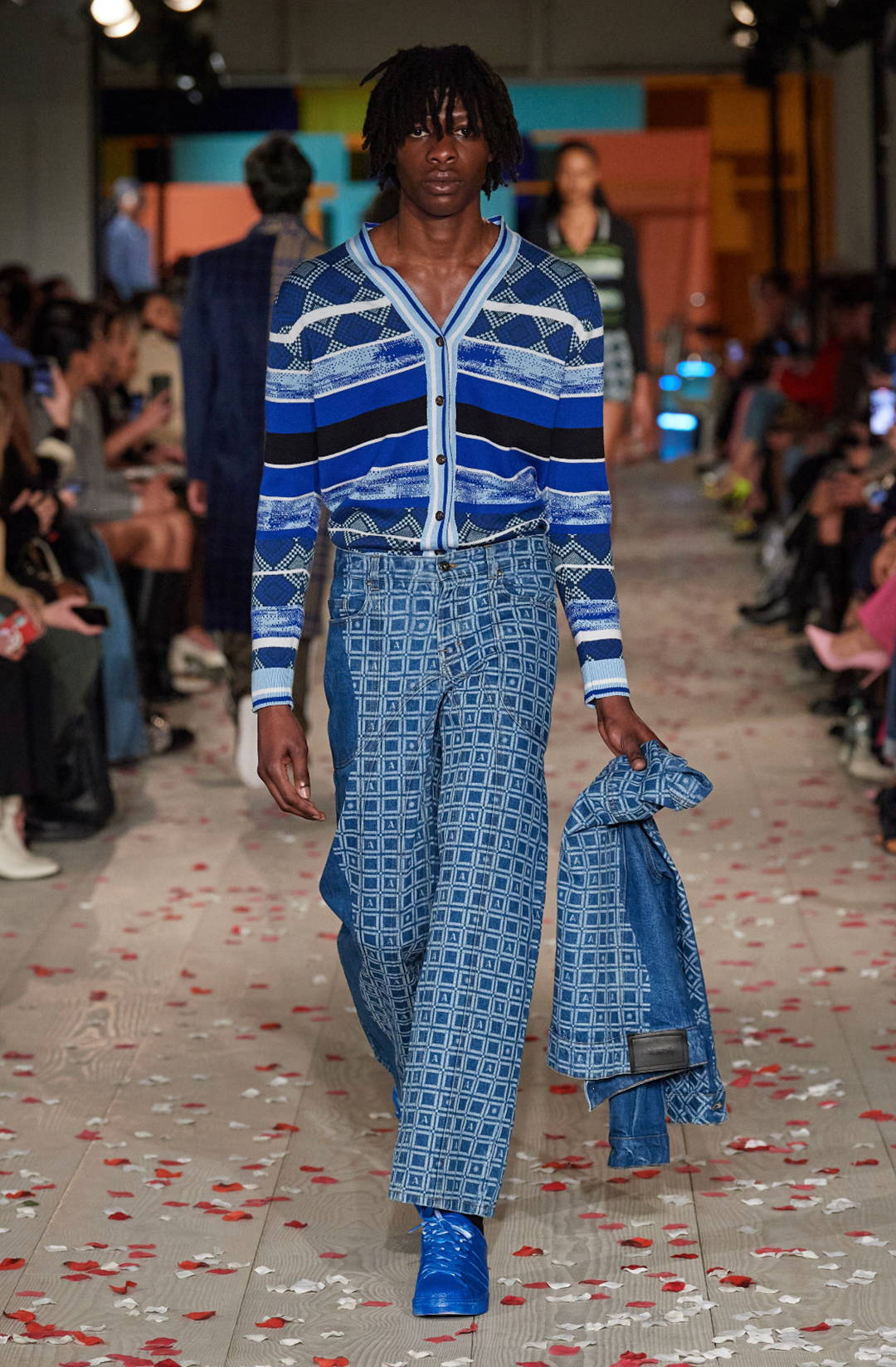 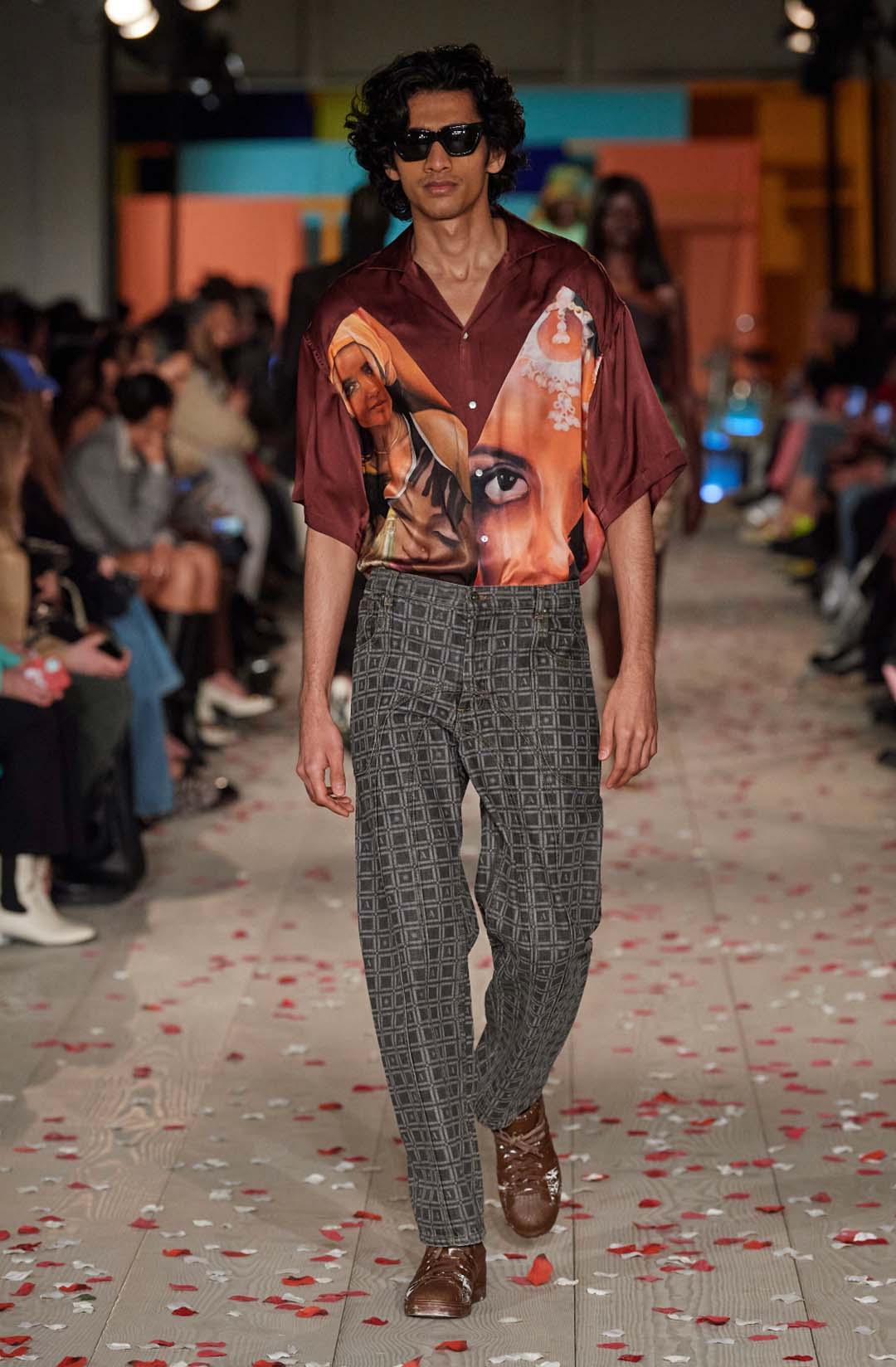 They say diamonds are made under pressure, and Priya Ahluwalia is a true testament to that. After five fashion films produced under the restraint of the pandemic, and five years in business, the designer presented her first-ever catwalk show. For her AW22 collection the designer referenced her cross-continental heritage whilst exploring her connection to both Bollywood, Nollywood and the influence of traditional Indian and Nigerian storytelling.

Poster-print silk shirts, two-piece tailored tracksuits, and knitwear paired with 100% organic denim jeans were seen across the menswear. After debuting womenswear for the first time last season, the designer presented a full selection within her latest instalment. A satin asymmetric top, denim jumpsuit, miniskirts and a chic corduroy coat were all features - some elements of which mirrored the menswear offering.

There was a type of maturity to this collection. Clothing with real meaning that was sophisticated yet sexy and commanded the attention of the audience as it came down the catwalk. As we return to a sense of normality, Ahluwalia is getting our wardrobes ready and taking full advantage of the physical platform her talent has inherited to let her fashion flourish for all of us to see. 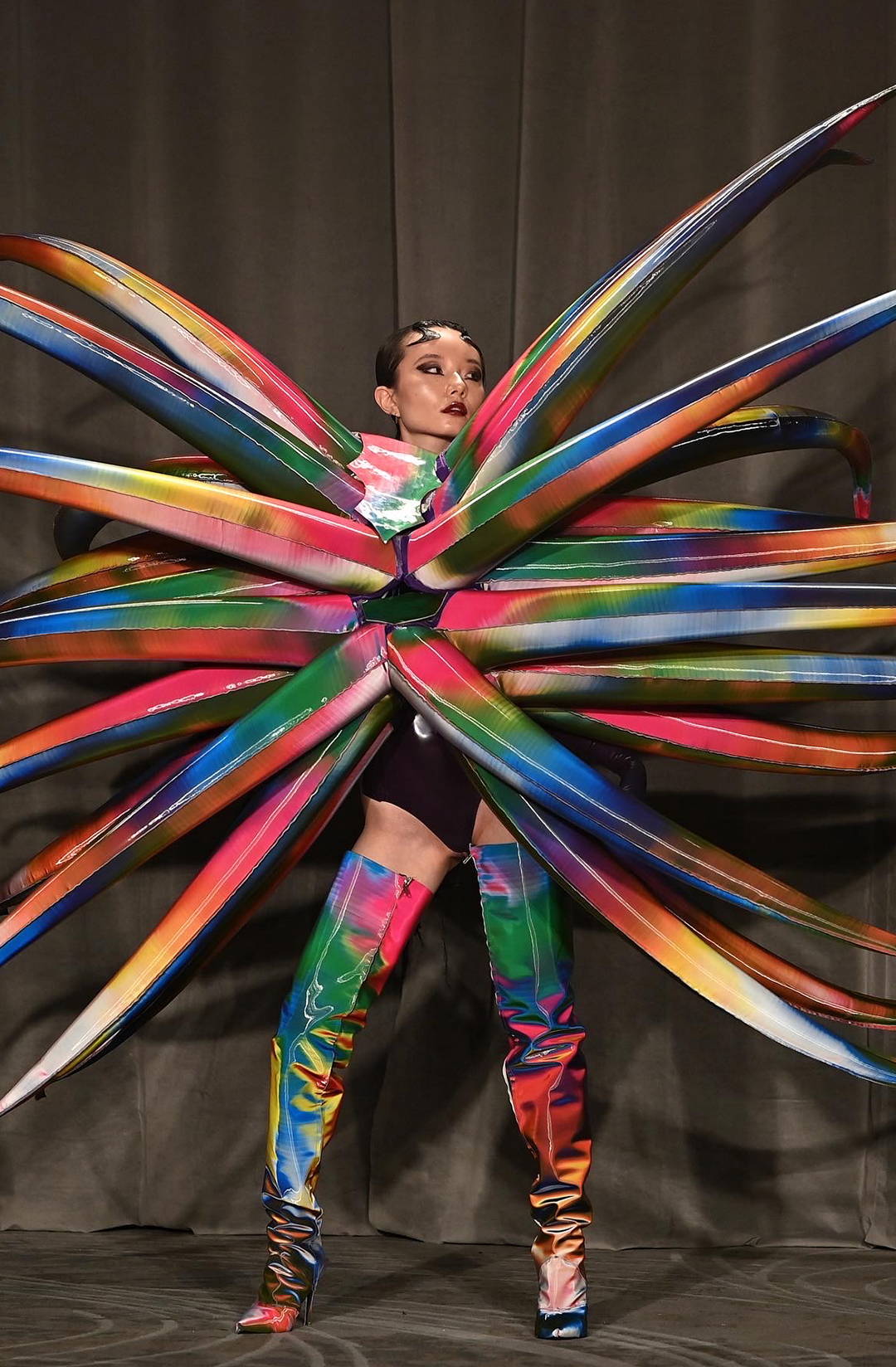 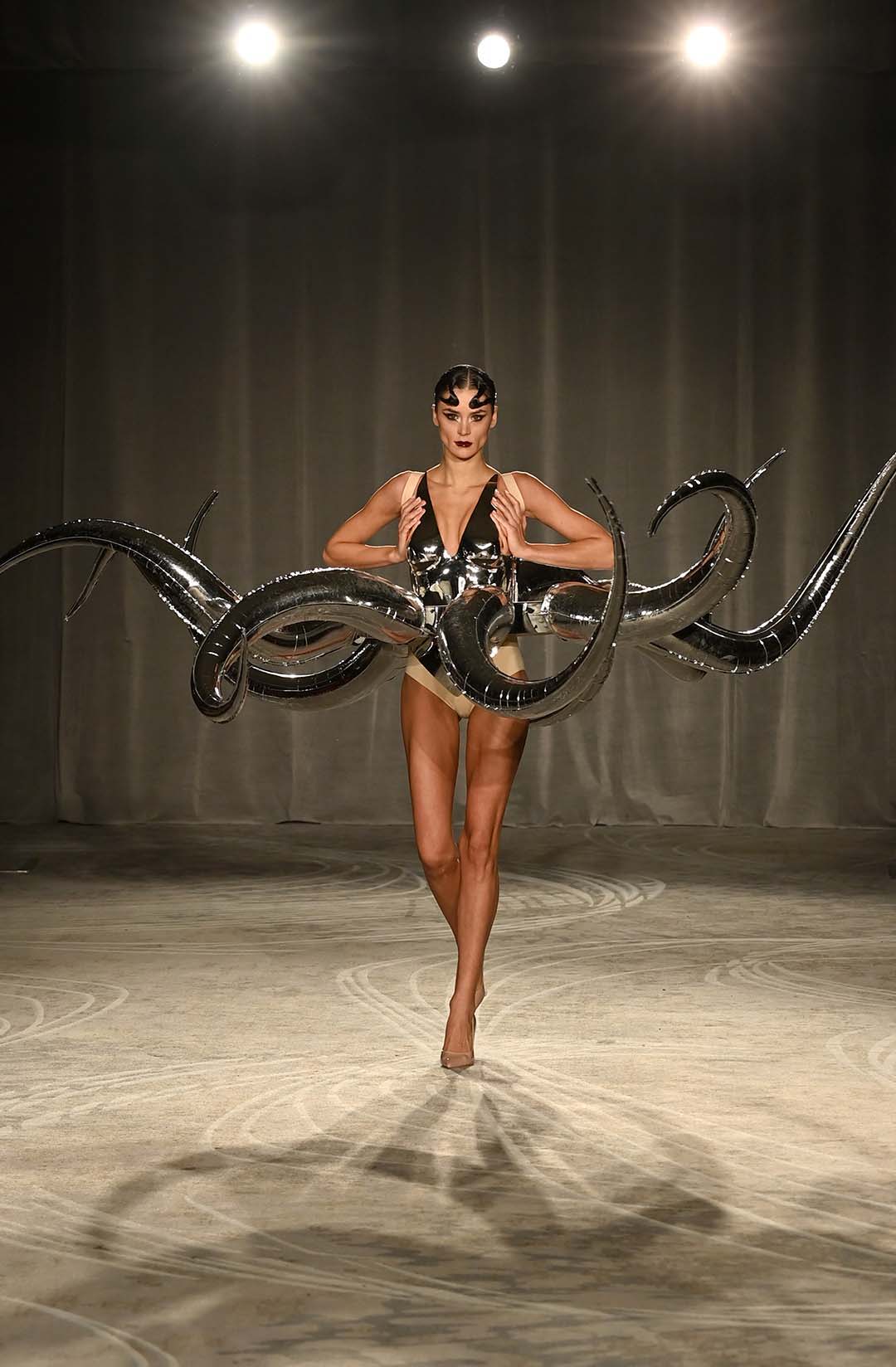 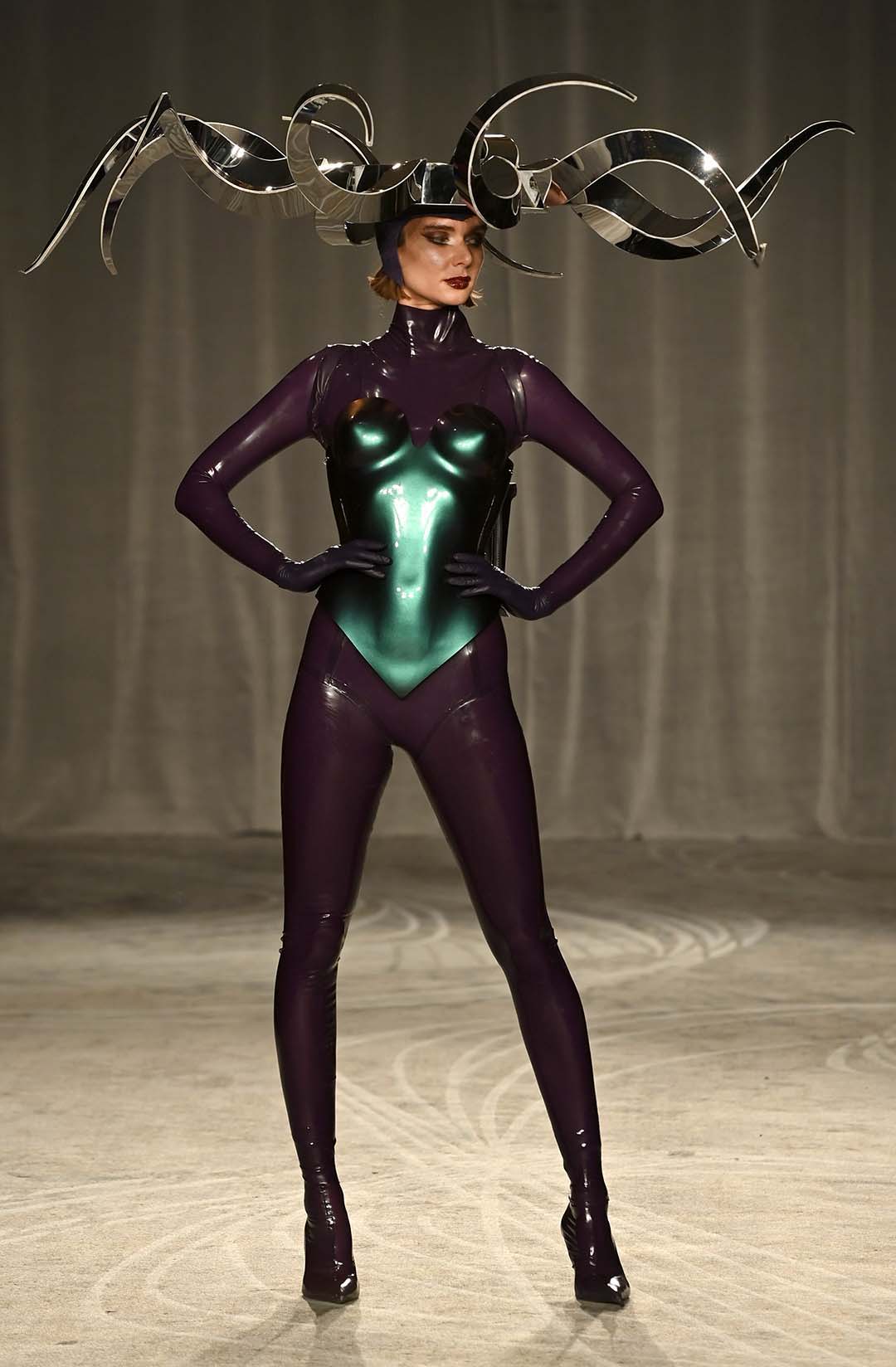 With the core inspiration of the deep sea behind the collection, combined with an exploration of the metaverse, it’s obvious to see why Irving’s catwalk was filled with extravagantly aquatic creations. What Irving produced this season could only be described as a meeting between performance art and fashion theatre. Inflatable tentacles attached to sculpted bodices, floor-length trench coats with huge spikes sticking out of the sleeves, holographic thigh high boots, and rotating head pieces were all part of Irving’s jaw dropping spectacle.

As the concept of NFTs continues to dominate the conversations within the industry, Irving is a designer who embraces the idea. In January, Irving’s NFT dress collection previewed via the music video launch of virtual artist and influencer Maie. Additionally, three of the pieces from his latest London Fashion Week instalment were also available to purchase as NFTs the day after the collection debuted. Irving seems intent on proving that the catwalk is a place to not only break the rules but also to establish your own.

The show was produced in collaboration with On Off London, a platform that has dedicated itself to not only showcasing creative talent, but also nurturing it. Irving follows in the footsteps of designers such as J.W. Anderson, Gareth Pugh, and Pam Hogg, other designers that the organisation has supported over the last two decades. 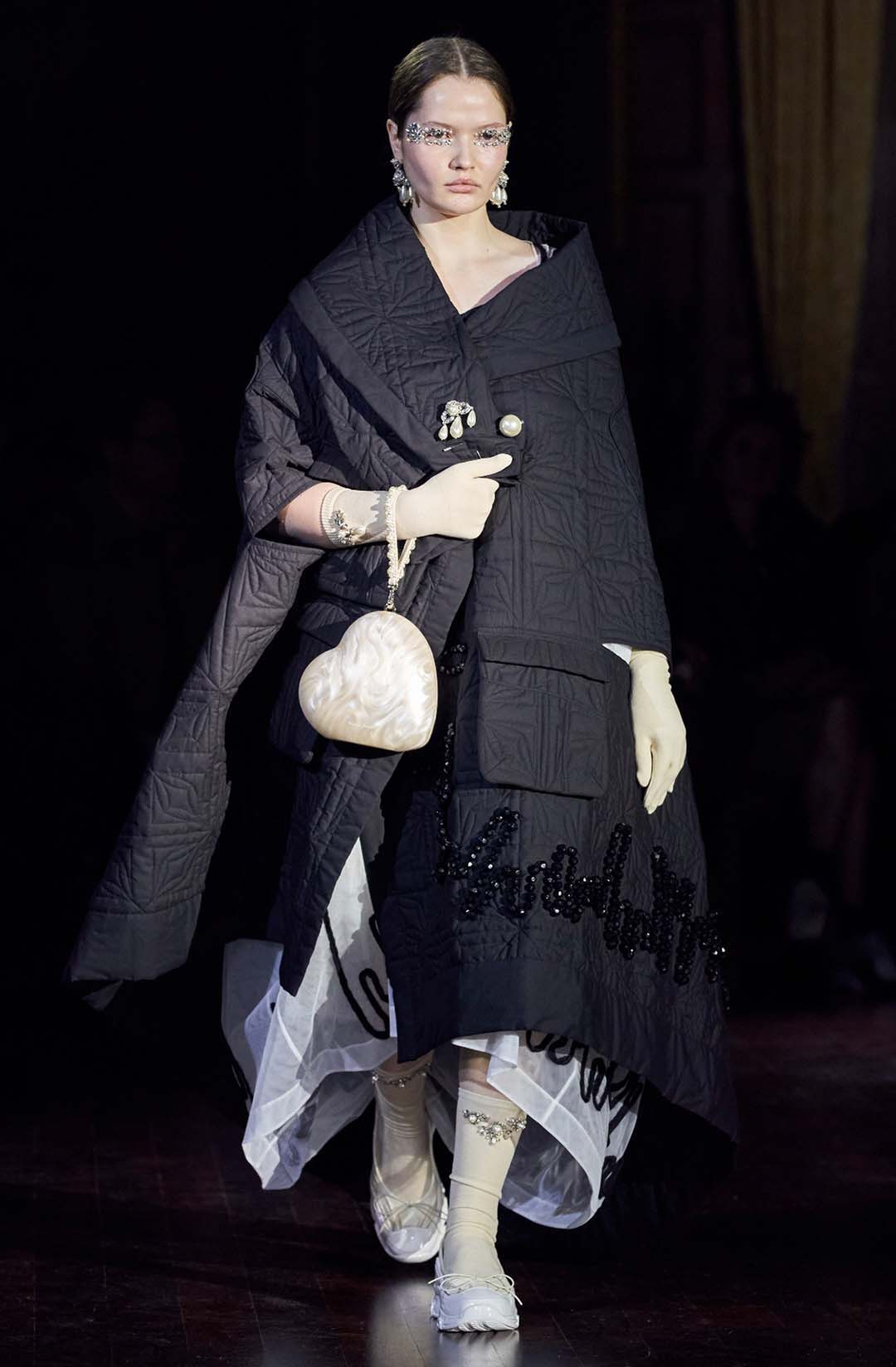 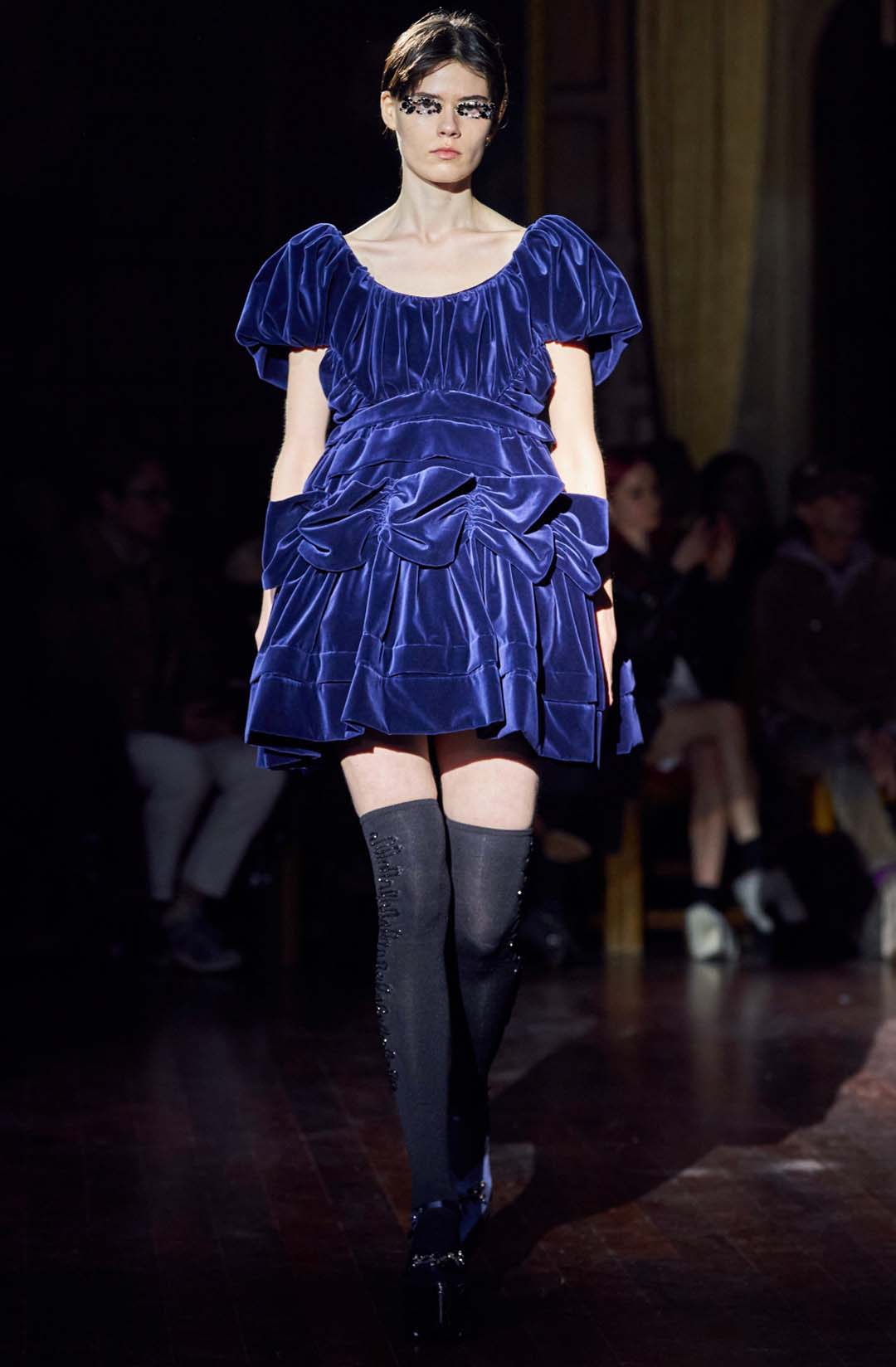 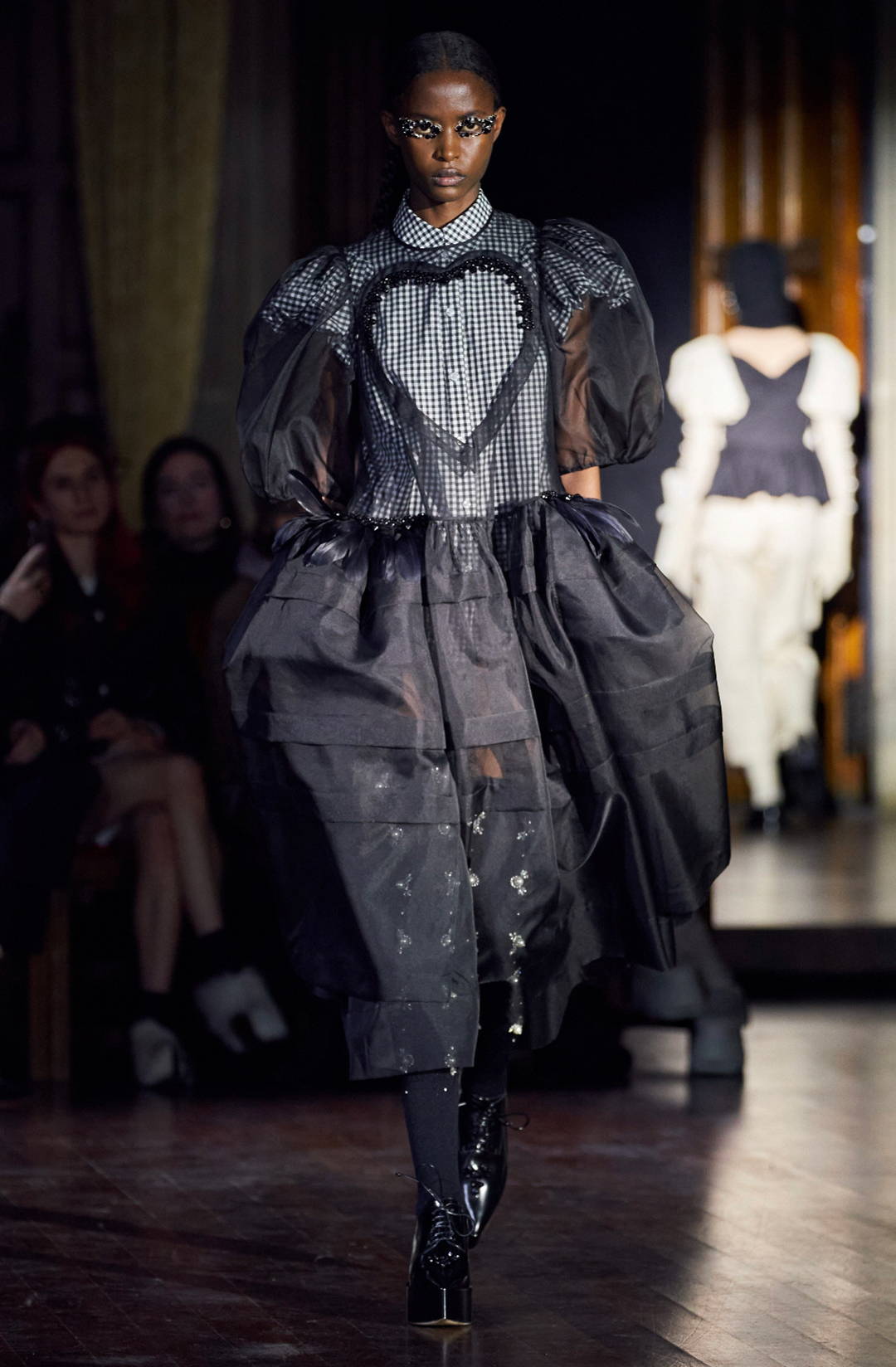 Following a successful collaboration with H&M last year and celebrating the brand’s ten year anniversary a handful of months ago, there appears to be no slowing down going into the next decade for Simone Rocha as she presented her romantically gothic infused AW22 collection. Referencing the designer’s Irish history by drawing inspiration from a horror story of ancient Irish mythology ‘Children of Lir’, the collection tells the tale of four children of an Irish King who were turned into swans by a jealous stepmother.

Sheer slip dresses with embroidered swan patterns, pinstripe and gingham shirts worn over and under opulent organza, pearl embellished accessories, and just the right amount of velvet ensembles were all part of Rocha's vision this season. However, amongst these delicate details there appeared to be a slightly darker mood to the collection - and not just from the horror story the designer revisited - with some pieces referencing armour. Quilted blankets wrapped around the model’s shoulders, knitted balaclavas with crystal embroidery, and voluminous layering with contrasting fabrics were all incorporated within Rocha’s signature silhouettes.

After a turbulent two years it seems that the designer is reinstating who the Simone Rocha individual might be in today’s world, and what they want in their wardrobes. Rocha is creating clothes that not only empower but also protect the wearer as they take on the challenges of their day-to-day lives; whilst still encapsulating the timeless elegance that made us fall in love with the brand since its conception. Elements of which that will keep us adoring Rocha’s collections for another ten years.

Looking beyond the ravishing glamour I’ve witnessed over the past week, I left sensing a far more significant undertone from the collections this season. Designers made statements on wider society whilst solidifying their own legacies. The experience of the more established partnered with the experimentation of the emerging. Boundless creativity met with the warmth of community. Milestone anniversaries collided with the optimism of new beginnings. To me, this is what London Fashion Week is all about.