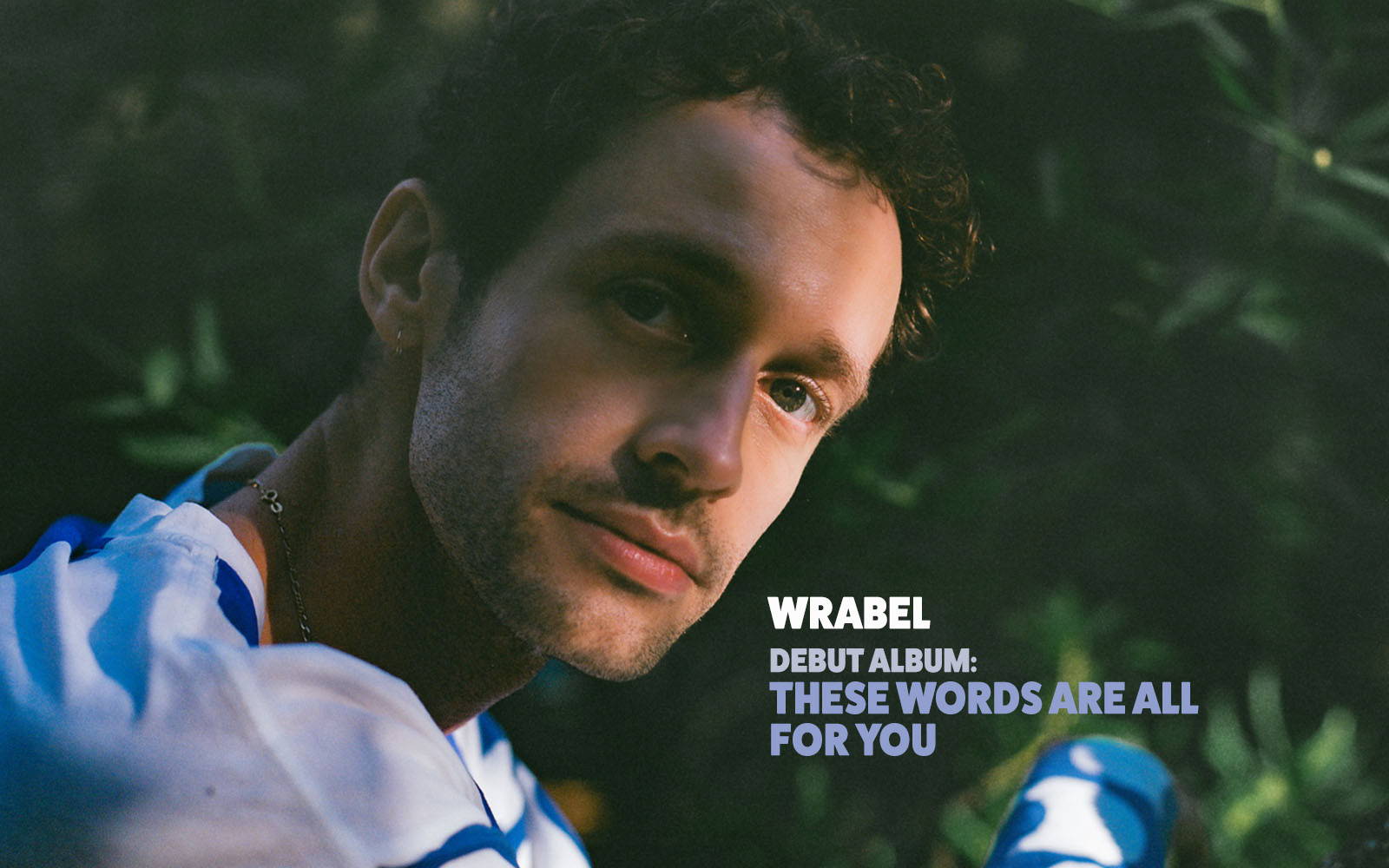 Wrabel sits down with Rollacoaster to discuss his emotionally charged debut album, “These Words Are All For You”

Words by Octavia Akoulitchev
You might not yet know Wrabel’s name, but you probably know the songs he’s worked on. Hailed by American Songwriter as “one of Hollywood’s finest songwriters for over a decade”, Wrabel’s worked with Kesha, P!NK, Ellie Goulding, Marshmello, and Louis the Child, to name a few. Unique in his ability to craft raw emotion and autobiographical narrative into chart-topping tunes, he’s finally preparing to release his own debut album, “These Words Are All For You”, on September 24.
Speaking about the album, Wrabel said, “I hope that there's songs on there that people feel like they can lean on. I hope there's songs that people can play with their significant other and just smile and sit and listen and feel loved and feel heard and seen and understood. I just hope that people connect to it. I know what it's like to listen to a song and feel like, ‘wow, that is exactly what I needed to hear’. I hope that something on the album connects with someone in that way. Even one person, or one song, that’s enough for me.”
With the track, “London”, just released, Wrabel sat down with Rollacoaster to discuss the story behind the song, his advice to young songwriters on how to channel their heartbreak into well-crafted verse, and why he decided to make this record without the backing of a major label.

Yeah, if it really speaks to people, they’ll listen. You’ve worked with such a wide range of artists over the past few years, from Kesha to Marshmello, how has that affected your songwriting process?
I think my process has definitely changed. I like to think that we're all constantly evolving, learning, growing, and pushing ourselves but I also tend to rely pretty heavily on my comfort zone of writing an emotional mid tempo song that's narrative and literal. I try not to stray too far away from that, because I think that every writer has a different sweet spot, and I tend to think of comfort zones as sweet spots. “Comfort zone” has this negative connotation, but you can spend so long having people tell you, “get out of your comfort zone, branch out and do something totally unexpected” and I'm like, “no, I really enjoy the world that I've tried to create”. I think there's something beautiful about it. That's one thing I love about collaboration, if you get three people in a room, we’ll all have different sweet spots and different comfort zones. So you leave with this middle ground, or venn diagram, that’s something I wouldn't have created by myself and neither would they, but it has touches and colours from all of us. Working with other artists has definitely opened me up to different ideas and approaches. Kesha has cracked my head and heart open so much through the writing process. From day one, measure one, lyric one, I was so floored by the honesty and vulnerability and lack of ego in the room, the willingness to throw out an idea that might be outlandish. She taught me that songs don't have to be serious to still be powerful, and that was a big one for me that I'm still trying to wrap my head around. Every artist that I work with is totally different. I'm constantly trying to open myself up to be new, fresh and different, and at the same time not stray too far away from my wheelhouse. I think we all have a comfort zone, because that's where we feel like we are masters of a domain. I feel really confident when I'm sitting down with anyone writing an emotional, story-based song. That's what I love to do, and that's what I dream about, so I try to not go too far outside of that.
So why did you release a debut album which was “you”? I know it’s not just you, but you’re not collaborating in the same way with other major artists here, and you’re doing it independently, without the backing of a major label.
Yeah, so making a record has always been my dream. When I moved to LA that was my “umbrella dream”, and I went through a few record labels. I'm so thankful for the opportunities that I've had over the past ten years, but my biggest resentment was that I never got a full length album released. I'd written them before, one was even all produced, but it never came out. And so going independent, I made my own label and partnered with Nettwerk and it’s been such a cathartic, as in all caps, bold, underlined, italicized, “cathartic” experience. As clichéd as it sounds, because I hear artists talk about that all the time, like “I’m on a major label, and I don't have any control”. But it is really a hard thing when creatively, you don't feel understood by the gatekeepers between you and releasing music. Again, I'm thankful for the opportunities I've had, and I didn't leave the major label system with an “I hate you all” mentality, but it has been such a beautiful experience to lean into “what do I want to do? What stories do I want to tell?” I think the oldest song is eight years old, this record is like an autobiography and it's been really special. I made it with so many friends, and that's been a really beautiful thing to create something in a safe place with people that understand me. It's been such a long time coming, and I've worked so hard to make this record, three times over, and so now to have a release date and have it going to master... it just blows my mind.
It’s a huge feat, congratulations. What do you want people to take away from the album?
The album is so much more hopeful than it was in the past. The first time I wrote this album, it was a break-up album, and I'm glad it's not that. If I had a mission statement it would be that I hope something I do can make someone feel less alone. I hope that there's songs on there that people feel like they can lean on. I hope there's songs that people can play with their significant other and just smile and sit and listen and feel loved and feel heard and seen and understood. I just hope that people connect to it. I know what it's like to listen to a song and feel like, “wow, that is exactly what I needed to hear”. I hope that something on the album connects with someone in that way. Even one person, or one song, that’s enough for me.