PEGGY GOU is shaking up the DJ world. Chatting to Maybelle Morgan, she discusses Asian excellence, her upcoming collaboration with sunglass titans Ray-Ban, and why “Gou-mania” will never die. 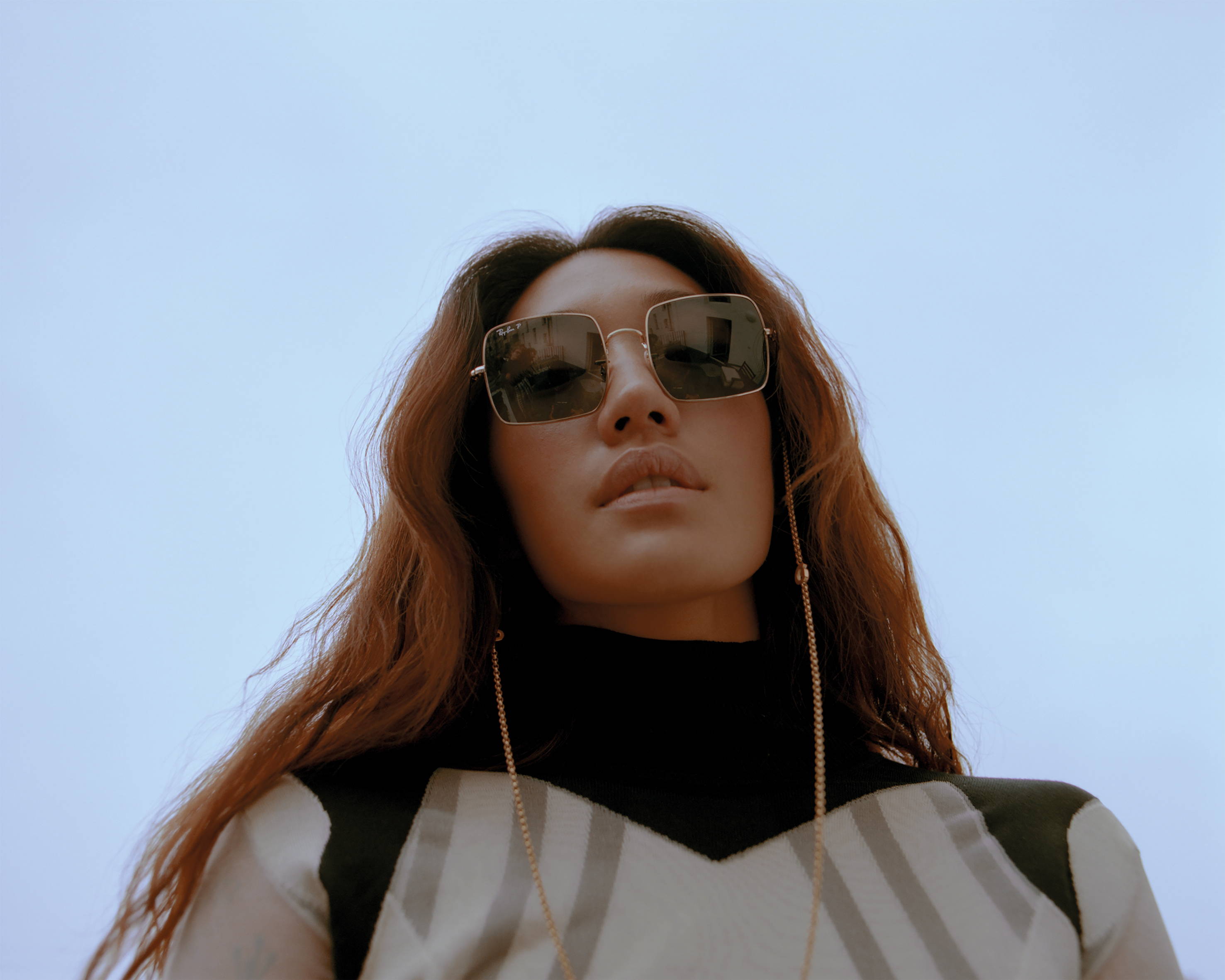 There is something to be said about the dedication of super fans. Waiting at empty gig barriers without using the toilet for hours to secure closer proximity to the band. Obediently charging into a swirling black hole of a mosh pit at the behest of an energetic frontman. But if we’re on the topic of devoted super fans, those of Korean DJ Peggy Gou take the crown, the kingdom, the lot.

Symptoms of Gou-mania have been known to manifest themselves through shoe-removal and waving, the pelting of toy giraffes (her favourite animal), a two-stepping sea of Korean flags, and lovingly handmade paraphernalia involving puns on the Berlin-based DJ’s surname. And you’ve got to give them credit, “Just Gou It” on a t-shirt is peak fan ingenuity. “I feel very lucky,” Peggy chuckles when I quiz her about it over the phone from LA. “I still get surprised by people and how crazy they can be with the name Gou, you know? There was one guy who made a whole combination: a t-shirt with a giraffe, a Korean flag and the Gou. The ‘Gou-ci Gang’ tee was a favourite.”

Taking into consideration that her debut EP “Art of War” was only released back in 2016, the flaming intensity of the public’s love affair with her has been unexpected, especially when that level of superstar status has only previously been reserved for instrument-wielding musicians. “It didn’t used to be like this and things are changing all the time,” Peggy agrees. “I remember watching a documentary and people used to go out and never look at the DJ – they didn’t care about who was DJing, you know? But now it’s a job that people want.”

The Black Madonna, Nina Kraviz, Honey Dijon, Helena Hauff – there is no denying the influx of formidable female DJs right now, revitalising the scene and doing their bit to tilt up the scales that have been so previously weighted with men. But it would be inaccurate to diminish Peggy’s success to that of a well-timed breakthrough. On listening to her deliciously heady house tracks, it’s all too obvious why we’re hooked. In an industry that can be snobby or elitist, her brightly-coloured brand of textured electronic music, with hints of jangly disco-funk and melty acid is contagious, seductive and accessible. 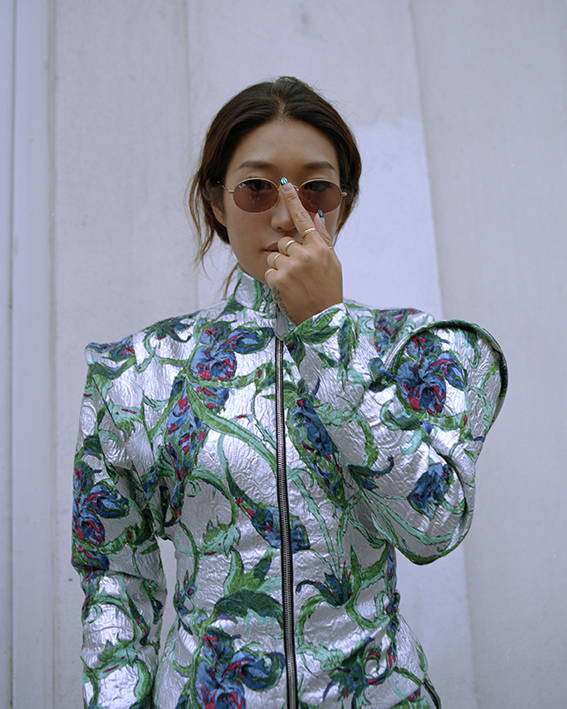 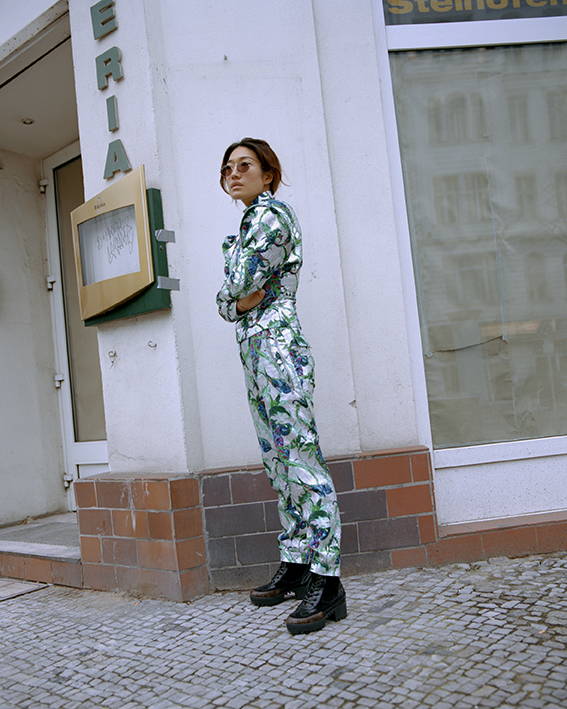 Born in Incheon,South Korea, the singer initially moved to London to study fashion, before being sidetracked by her newfound love of music production. Like most, her worried family expressed reservations. “My parents were like, ‘You moved to London to study fashion, now you want to move to Berlin to be a DJ?’” She remembers. “They didn’t understand. And they definitely didn’t understand why I had to go out at 1am and come back at 5am.” But years later, and there’s no denying that their well-placed trust in their daughter was worth it. Her voice glows when she talks about their pride. “I’m the freak in my family,” she laughs. “I didn’t study economy, I’m the wild one. Obviously there was conflict and arguments in the beginning, but they never once told me not to do it. And they do understand now.”

The turning point, and likely the time Peggy’s parents started seeing the fruits of their daughter’s toil, came in 2018 with the phenomenal success of her crowd-pleasing mega hit “It Makes You Forget (Itgehane)”, in which in she sings in her native Korean with laid-back staccato. It became an instant classic and a festival circuit favourite, propelling her rocket-style into the big leagues, with the first few opening bars now as distinctive and recognisable as any mainstream pop bop. The DJ’s buttery vocals are also heard in “Han Jan”, taken from the same EP, “Once.” “I just wanted to do something different,” she explains. “I hadn’t heard any [similar] tracks in my language. And sometimes when I find a record that does have another language in it, somehow it becomes precious to me. It was also a challenge.” 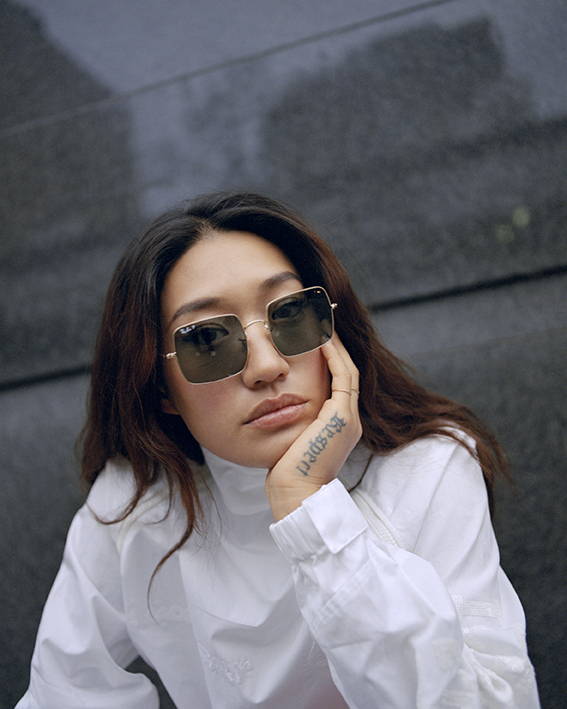 Peggy wears top by ICEBERG and sunglasses by RAY-BAN 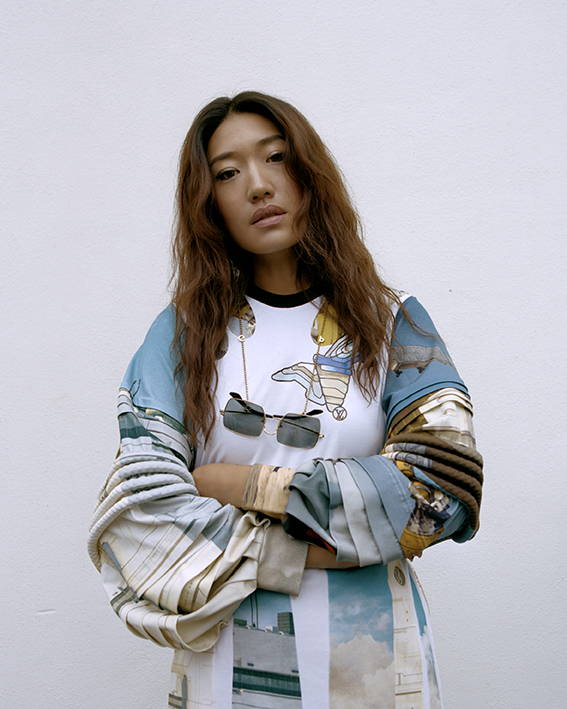 On singing in her mother tongue, it is impossible not to address the hot topic of Asian excellence, especially at a time when a resurgence in film and TV are doing us a solid. Yes, us. I subtly-not-so-subtly slip in the fact that I am also Asian (although of Malaysian descent), and commend her for what she is doing for representation. She instantly cracks up. “Asian people have this weird, special connection,” she laughs. “Do you know when you see someone Asian and you’re like, ‘I’m Asian too’? What do you call that? It shouldn’t be about nationality, but I feel very proud to be Asian.”

Peggy may feel proud, but pride is something she inspires all too easily in her fans. She previously stated that she wanted to be the first female Korean DJ to play Berghain, the techno world’s unspoken Mecca in Berlin. She spent so much time in the notorious nightclub, she even dubbed her regular dance floor spot by the DJ booth “Peggy Zone”. Obviously, as is the Peggy way, she has since achieved that goal, and many more. Worldwide festival sets at Coachella, Glastonbury, Dimensions in Croatia, Amsterdam’s revered Dekmantel, a headline slot at London’s Printworks, and let’s not forget her forthcoming music imprint Gudu (meaning “shoes” in Korean), which she is choosing to keep relatively schtum on for now. 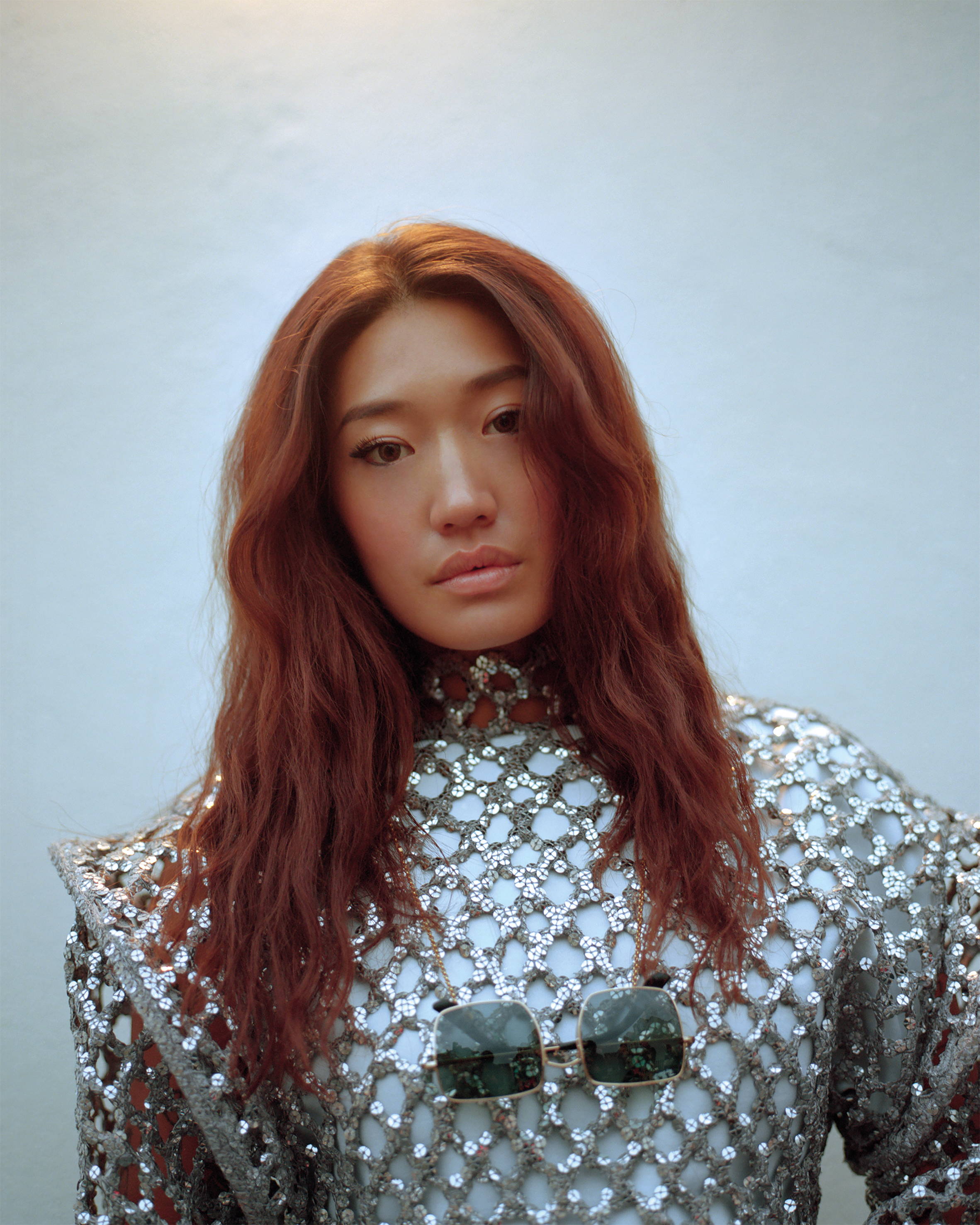 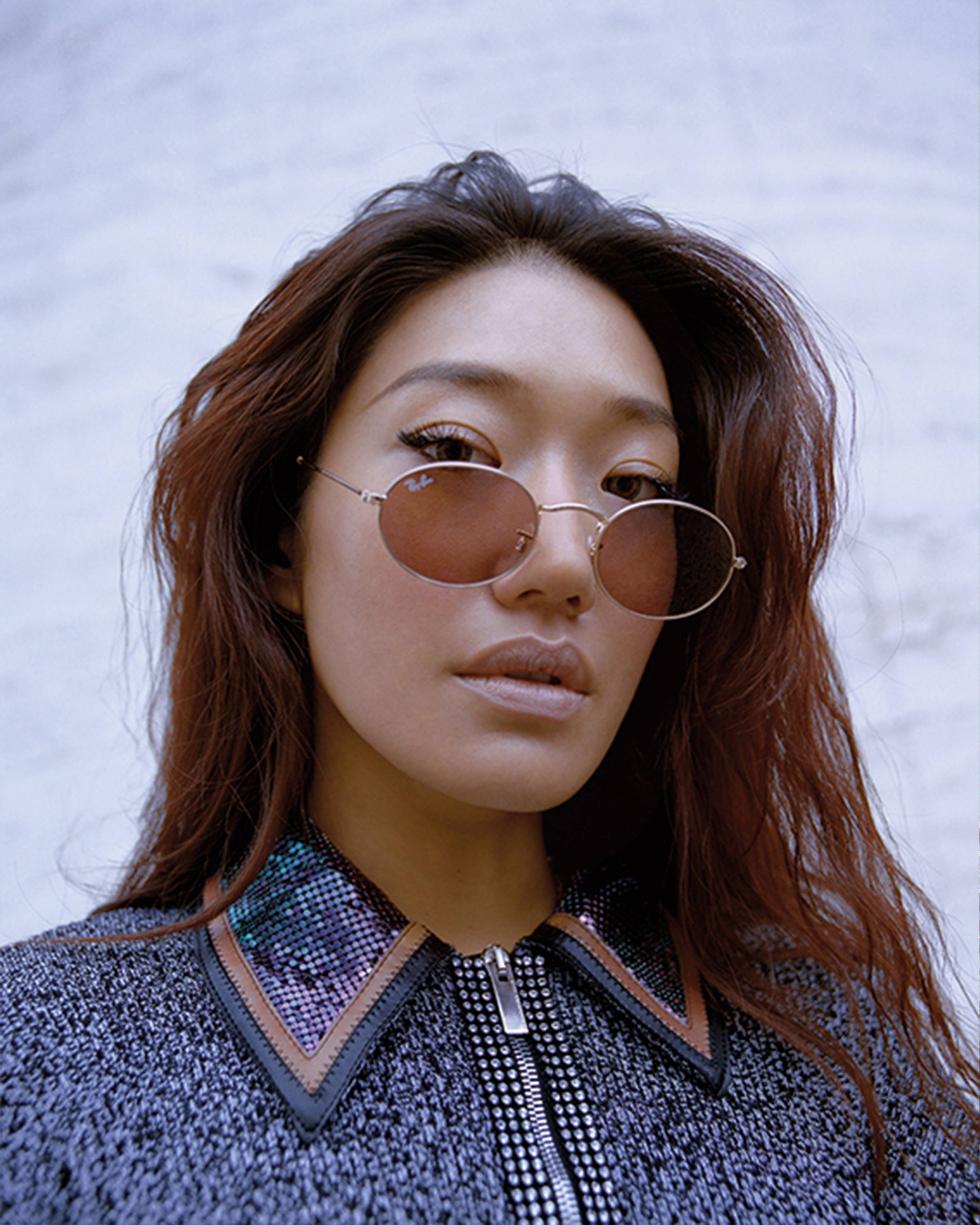 And those are just her musical achievements. In case you’ve been hiding under a rock for the last couple of years, she has mastered a mammoth social media presence. She’s even been the subject of a viral fashion meme. It was only a matter of time before we saw her capitalise on our unrestrained obsession with her exotic travels, tattoos (she has about 50) and widely-coveted style. Her fashion line KIRIN (“giraffe” in Korean), which specialises in luxe streetwear, recently launched at Paris Fashion Week under the umbrella of New Guards Group, the Italian fashion production group which also includes her friend Virgil Abloh’s brand, Off-White. “It’s starting out as just womenswear,” she chatters excitedly. “You can really see that it’s me, and I think it’ll eventually become unisex.”

Her latest impressive endeavour has seen her collaborate with eyewear giant Ray-Ban on two sunglasses designs: one, a grey-blue relaunch of their iconic 70s square, and the other, a burnt violet oval, as well as the first accessory ever sold with sunglasses in the brand’s history, a retro-look gold chain. This comes as part of the brand’s series of artist collaborations via their creative music platform Ray-Ban Studios – and Peggy, of course, was the natural choice considering her Instagram-showcased obsession with the accessory. I audibly gasp when she estimates that she probably owns about 400 pairs. So if anyone knows sunglasses, it’s her. “I love the lens colours,” she beams. “And it’s my first sunglasses collaboration, so it’s special to me.” 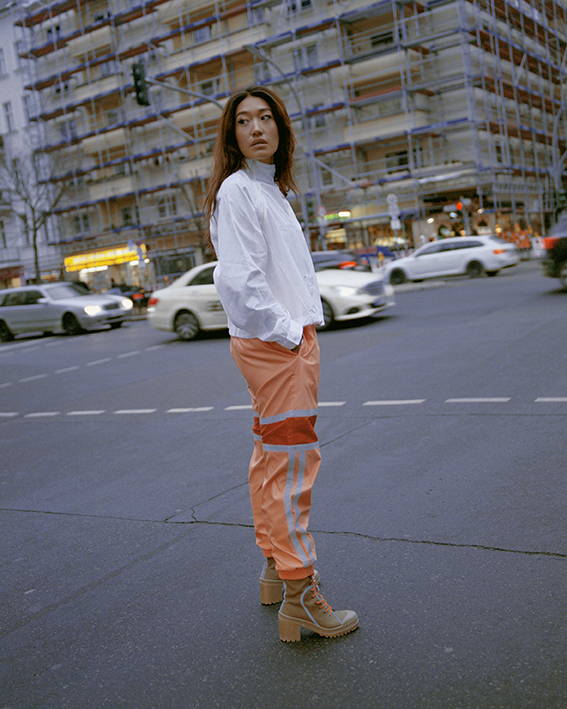 Peggy wears top by ICEBERG, trousers by CAITLYN PRICE and shoes by GCDS 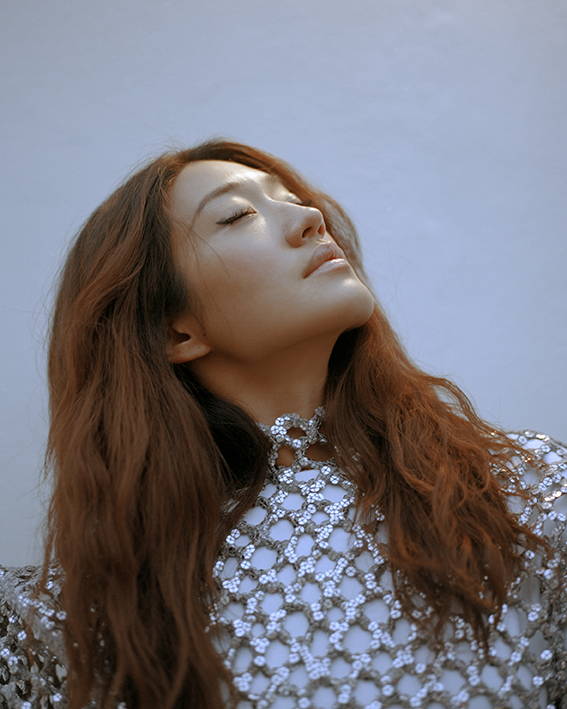 A fair observation to make is that every time Peggy sets her sights on a goal, she lines them up like posts on a coconut shy, knocking each one over methodically and with effortless flourish. I ask her why she thinks she has become so successful and adored in such a short space of time, especially seeing as she only has less than a handful of EPs under her belt. Ambition? Determination? “All of that!” She confirms. “And I always try to push my boundaries. I always want more and I always want the best.” She pauses momentarily and with a knowing chuckle she admits. “And I’m a control freak.”

There is a steely determination in Peggy that some could perceive as churlish, but you swiftly realise it is more that she is unwavering and uncompromising in what she wants, no doubt a contributing factor to her meteoric ascent – which still, despite all the fanfare, is something she is uncomfortable with accepting. “I’m not into talking about my goals,” she declares. “You were saying that I’m successful, but I don’t see myself as successful – for me, I have a lot of things to do and achieve. Rather than talk about all the things I want to do, I would rather show you.”

Roll up, roll up. Grab a drink and settle in. Because there is absolutely no doubt that a show is what we’re in for.